Your utility bill could be the next $5 gas

Drivers have stopped panicking, now that gasoline prices have dropped from $5 per gallon in June to less than $4. But global energy markets are still turbulent, and the next pinch might come from winter prices for heat and electricity.

Tight energy markets began pushing up the price of natural gas, America’s largest source of electricity, in 2021. Russia’s invasion of Ukraine and the corresponding energy war in Europe have further boosted global gas prices, with Europe facing soaring costs and possible blackouts this winter. Price hikes in the United States aren’t as severe, but US natural gas is still trading about 65% higher than a year ago, and 170% higher than two years ago.

That means winter power and heating costs are likely to be considerably higher than last year, which itself was a budget breaker.

“We’re looking at fairly high gas prices, so all things equal, electricity prices should be higher as well,” tells Sarah Emerson, managing principal at ESAI Energy. “We’re going to have a pretty strong winter [for prices].”

Energy costs for homes and businesses have been one of the key drivers of high inflation. Overall inflation is running 8.3% year-over-year, but home energy costs are up 21%. Just about everybody knows the price of gasoline, since it’s posted on giant numbers at every filling station. Almost nobody knows the price of natural gas or electricity, which is buried in the fine print on monthly utility statements. People certainly notice when their monthly bill arrives, but consumers don’t adjust to higher heating or electricity costs as quickly or aggressively as they do to higher pump prices. 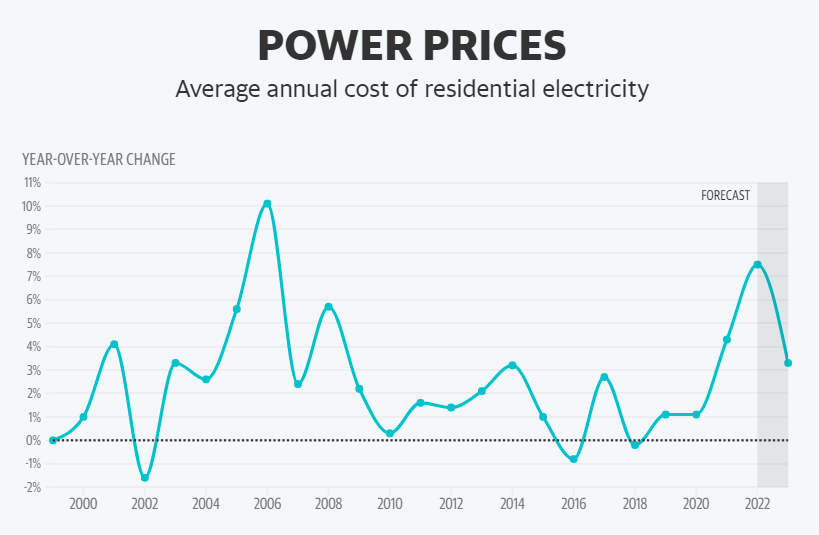 Natural gas prices are likely to go higher, too, with the Energy Department forecasting prices of about $9 per 1 million BTUs by the end of this year. The current price is around $7, so that would be about 30% higher by mid-winter. Since most people use natural gas or electricity for heat (or both), there’s no escaping higher costs. The price of heating oil and propane, used by a smaller portion of households, has been rising, as well. The declining cost of solar power is about the only good news, but few households use solar for winter heat.

Some Americans think “energy independence” once locked in low US energy costs, with the Biden administration somehow wrecking that through hostility to fossil fuels. Reality is more complicated. The United States became the world’s largest producer of oil and natural gas in 2018. It still is. And the United States has been producing more energy than it consumes for nearly a decade. But for much of that time, the fracking revolution and a gold-rush mentality led to overproduction and poor profitability in the energy sector. Money-losing energy ventures essentially subsidized low costs for consumers.

The COVID lockdowns in 2020 caused savage losses for energy producers, and forced major business-model changes. Investors began to demand faster returns on their money, with cash flow going back to shareholders instead of financing new capacity. Energy firms shuttered unproductive refineries and other aging infrastructure, reducing the capacity to drill and process fossil fuels. At the same time, the pivot to renewables has made investors leery of financing big projects that may not generate profits for a decade or more.

That made the US energy sector more susceptible to the type of shock caused by Russia’s invasion of Ukraine in February. Oil prices spiked afterward, out of fear that Russia, the world’s third-largest energy producer, would withhold oil from world markets, to punish Ukraine and its allies for sanctions, or disrupt oil markets in some other way. That hasn’t really happened, however, and a slowing global economy has reduced demand for oil. That’s why prices have retreated.

The natural gas market is different, because it’s harder to ship natural gas by ship. Russia was Europe’s largest supplier of natural gas before the war, but it has drastically cut gas sales to Europe by pipeline, forcing European nations to scramble for other sources of gas. Some of that has come from the United States, which is now shipping as much gas to Europe as export facilities will allow. Overall US natural gas production is at record levels, but so are exports. With markets tight to start with as the economy recovered from COVID, the marginal increase in demand is more than enough to push prices higher.

There is some good news, beyond the coming winter. US oil production, like natural gas, is heading toward new records highs—just as President Biden has called for. The Energy Department thinks that more US energy will help moderate the price of electricity, natural gas and gasoline by sometime next year. If Russia’s war in Ukraine winds down, that could be another factor forcing energy prices down. Winter is coming, but not forever.