Will GameStop’s New NFT Marketplace Turn Into a Winner After All?

The video game retailer’s big bet on crypto is off to a better-than-expected start.

The new non-fungible token (NFT) marketplace from GameStop (GME -5.03%) is off to a quick start a mere one week after its launch. Although the numbers won’t turn its primary business around or catapult the video game retailer to the top ranks of the NFT world, it’s had a surprising bit of success amid a collapse of the cryptocurrency and NFT markets.

However, early wins don’t make it a long-term viable platform, and GameStop still needs to figure out how it’s going to survive in a gaming world that’s increasingly digital and online.

GameStop NFT is part of the retailer’s response to an industry undergoing a transformation, with the most visible pieces of its plan being a foray into the crypto markets. At the end of May, for example, the company launched GameStop Wallet, a self-custodial digital asset Ethereum (ETH -6.74%) wallet that a user controls and can access without leaving their browser.

But it’s unfortunate timing for the video game seller as crypto winter has settled in and could blanket the landscape for some time to come.

Some $2 trillion in value has been lost since the market hit its peak last year, and though many will point to the collapse of the stock market as a way of saying these things happen, the supposed strength of crypto was being a stable anchor to protect financial assets during turmoil. Because people are “investing” in crypto rather than using it as a storehouse of value, it’s become difficult to distinguish it from other asset classes that go through boom and bust cycles.

The nascent industry is already experiencing some high-profile bankruptcies, the latest being the collapse of Celsius, a major crypto lender, which owes users some $4.7 billion. 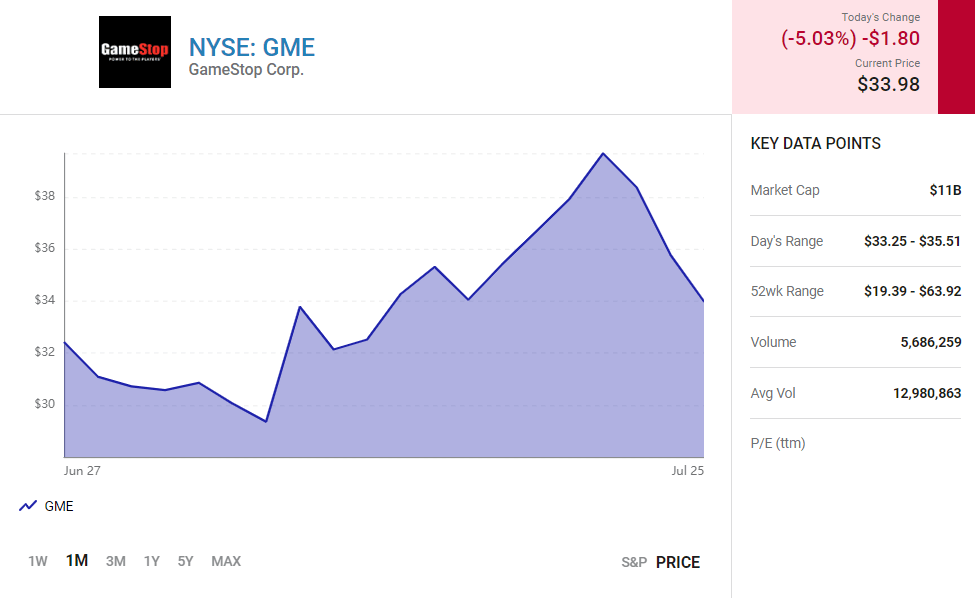 It’s against this background that GameStop is diving head-first into the pool. The NFT marketplace generated just under $2 million in transactions on its first day, and a week later, the top 50 collections have seen more than $7.5 million worth of transactions.

Of course, not all of that is GameStop’s money. It receives a 2.25% royalty on all transactions, meaning so far it has made about $169,000. That’s not going to turn its business around, but it’s a start. Although we don’t know how much it cost GameStop to invest in the marketplace’s creation, the question is whether it can appreciably grow the total.

According to gaming site Kotaku, dividing GameStop’s $6 billion in revenue last year by the almost 4,600 stores it had in operation, the video game retailer generated around $3,600 per day. In contrast, the NFT marketplace is making over $4,600 a day so far, and probably at much lower overhead, too.

GameStop’s NFT potential is limited. It deals only in “art” at the moment, and its biggest selling collection is from MetaBoy, which specializes in heavily pixelated GameBoy gifs. The collection has generated almost $1.9 million in transactions, or a quarter of the marketplace’s total.

While this is just one piece of GameStop’s transformation, the timing is problematic. Betting heavily on crypto amid a swift devaluation isn’t encouraging for its future. Transaction volumes could rise or fall, but OpenSea, the largest marketplace GameStop is hoping to compete against, has seen $116.6 million in volume over the past week. Worth noting, though, is that June’s $695 million total was a 73% plunge from the month before.

Almost three weeks into July, OpenSea’s volume stands at just $375 million, which is not an encouraging sign for GameStop.

Much ado about nothing

GameStop NFT is doing better than many expected, and the marketplace could add incrementally to its top and bottom line, though it won’t be a game-changer for the retailer.

The bigger question is whether GameStop can get the rest of its business turned around in time, or if the whole machine will be riding on fumes until it collapses under the weight. I’m not expecting the latter possibility to happen. But I also don’t expect this NFT marketplace to be more than a niche business at best, one that will be little more than a footnote to Gamestop’s operations.