There was no obvious news to explain the move — no analyst upgrades or price target hikes, nor any press releases from the defense and aerospace company.

Over the past week, digital images of Russian troop movements, and digital analyses of the destruction wreaked by Russian artillery bombardments and missile strikes have proliferated across Twitter. It’s clear that as war spreads across a country where civilian aircraft no longer fly, Maxar’s satellites are proving an invaluable tool for seeing in real time what is happening on the ground.

Citizen journalists on Twitter are circulating photos from Maxar; Reuters is building entire stories around satellite imagery released by Maxar Technologies. At the same time, one presumes, Maxar’s business selling space-based intelligence to the U.S. Department of Defense, the Canadian Department of National Defence (both listed as Maxar customers by S&P Global Market Intelligence), and various other partners both here and abroad, is booming.

What will all this new business add up to in terms of dollars and cents, and will it make Maxar stock a more attractive investment? That remains to be seen.

At present, the stock looks obviously attractive at a valuation of 45 times trailing earnings (and with a sizable debt load that pushes its cash-adjusted valuation up past 90 times). On the plus side, Maxar is starting to generate sizable free cash flow — about $147 million over the past 12 months, and analysts are projecting that number could more than double next year.

If Maxar’s business is booming as much as I think it must be right now, double could turn out to be a conservative estimate. 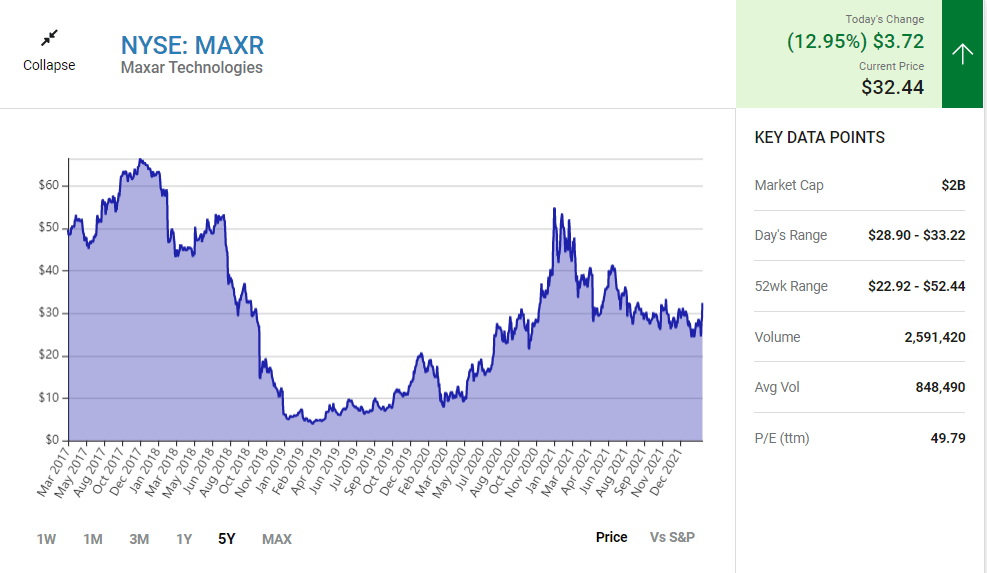