Why gold prices may be headed for record highs this year

IMF’s Georgieva expects one-third of the world economy to be in recession this year. That could bolster gold.

Gold recently climbed to its highest prices in nearly seven months, feeding expectations that the precious metal is on track to notch record highs this year, after closing out 2022 with a modest loss.

Gold “noticeably” appreciated by about $200 an ounce from November to the end of last year, and continued that trend in the first few days of January 2023, says Edmund Moy, a former director of the U.S. Mint.

The relative strength of the U.S. dollar and higher interest rates had pressured gold. But since November, the dollar has weakened and the Federal Reserve’s interest-rate hikes started to moderate—prompting gold to start making its upward move, says Moy, who is also a senior IRA strategist for gold and silver dealer U.S. Money Reserve.

Whether there is a soft or hard landing for the U.S. economy this year, the global economy is shaping up to have a worse year than last year, he says, and gold “usually rises during a recession, high inflation, or economic uncertainty.”

In a recent interview on CBS Sunday morning news program Face the Nation, International Monetary Fund Chief Kristalina Georgieva said the IMF expects one-third of the world economy to be in recession this year.

Based on his experience as director of the U.S. Mint during the 2008-09 financial crisis, Moy believes signs point to higher gold prices this year, and he wouldn’t be surprised if gold set new records, “topping $2,100 or more.” 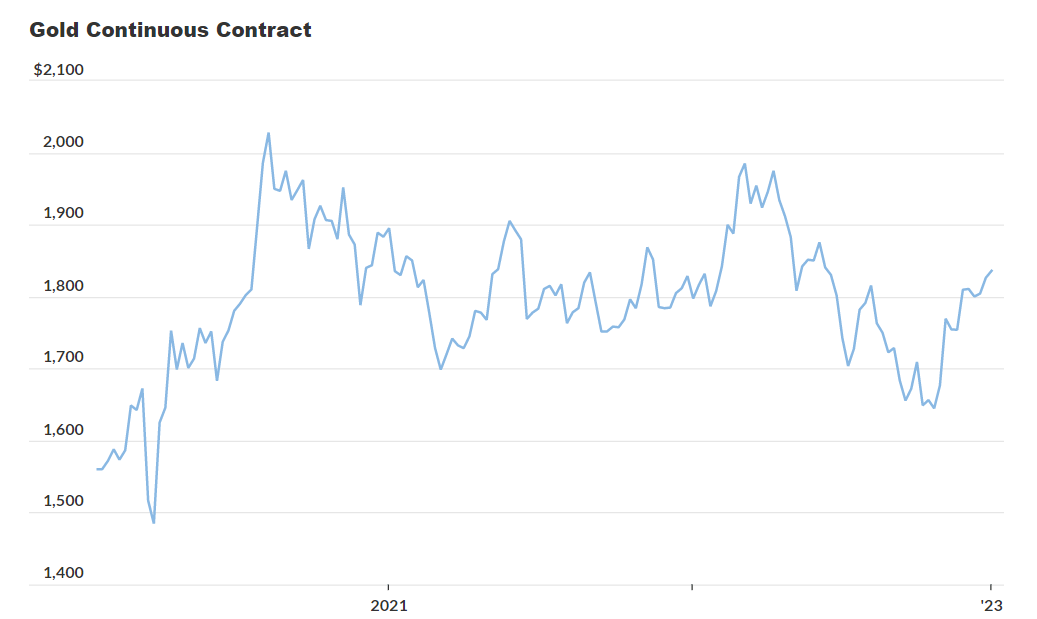 Gold can benefit from a recession

Gold typically sees gains in January, according to Adrian Ash, director of research at BullionVault. Gold futures climbed in each of the Januarys from 2014 to 2020, and posted losses for that month in 2021 and 2022, according to Dow Jones Market Data.

Precious metals may benefit as investors use the start of January to review their portfolio and rebalance their holdings of bullion, equities, and bonds, says Ash.

This month may also bring “heavy demand to invest in gold because—looking at the 12 months ahead—wealth managers and private savers alike focus on potential risks to their money, so they’re choosing to buy a little investment insurance for protection.”

Given gold’s gain at the start of the year, many analysts may already need to revise their 2023 forecast, he says.

In a survey conducted before Christmas, BullionVault users forecast a gold price of $2,012.60 for the end of 2023, with nearly 38% of the 1,829 full responses pointing to the need to spread risk and diversify users’ wider portfolios as the top reason for investing in physical bullion.

Looking ahead, however, the U.S. dollar will be a key to gold’s performance this year.

Gold has “nothing to fear” from interest-rate hikes, he says. It’s the impact of rate increases on the value of the dollar that is important. If the dollar has peaked, he expects to see gold above $2,000 again this year.

Some market predictions, however, mention prices as high as $3,000 an ounce. Milling-Stanley says that may be “heroically optimistic,” but “nothing in the world of gold is impossible.”

History suggests, he says, that when gold is in a “sustainable long-term uptrend,” which he believes has been in place since the price last touched $250 in 2001, prices tend to move up “stepwise, consolidating at every stage in the upward march.” That’s what he sees as most likely for 2023.

Meanwhile, net gold purchases for official reserves will continue to be a “significant feature” for the gold market as it has been for over a decade, says Milling-Stanley. Net purchases by the central bank complex as a whole have averaged between 10% and 15% of total global demand every year since 2011, with emerging market country central banks the largest purchasers, he says.

“There is every indication that such purchases will continue into the foreseeable future, not just in 2023,” he says.