Where inflation is getting better, and worse

Everybody’s unhappy with the latest inflation report, which shows that the annual change in price increases dropped by just one-tenth of a percentage point, from 8.3% in August to 8.2% in September. The Federal Reserve has been jacking up interest rates to force prices down, and inflation is turning out to be a stubborn foe. Investors keep hoping for a break in the data, showing the Fed’s medicine is starting to work. It keeps not happening.

While overall inflation remains high, some components of inflation have shifted. We’re finally seeing a few hopeful signs, such as cheaper gas and computer equipment, suggesting the problem may yet subside.

Here are several categories where inflation has been improving: 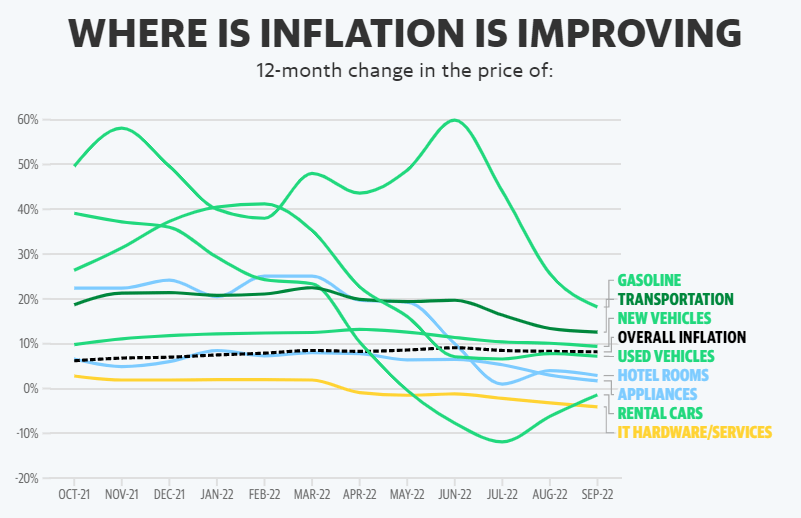 One takeaway is that car prices are moderating. During the COVID recovery, a global shortage of semiconductors has severely crimped new car production. The annual inflation rate for new cars hit 13.2% in April and has since dropped back to 9.4%—which is still high. But there’s been a more dramatic change in pricing for used cars, where year-over-year prices soared by 41.2% in February. The used-car inflation rate has dropped to 7.2%. Car-price inflation, both new and used, tells us there’s still a shortfall of vehicles, but supply problems are easing. Both of those year-over-year price changes will probably continue to decline. There could be negative inflation in car prices once the chip shortage is fully resolved.

Gasoline gets outsized attention, so we have to look at what’s happening there. Gas prices are 18% higher than they were a year ago, but that’s a big improvement on the 60% gas price inflation from June. As gas prices have dropped from $5 per gallon in June to less than $4 per gallon, consumer confidence has improved. So has President Biden’s approval rating. Gasoline accounts for only around 3% of the typical family’s spending, but it has a much more powerful impact on consumer psyches.

Inflation is moderating for appliances and rental cars, as shortages ease. The cost of hotel rooms shot up earlier this year, but that supply-demand mismatch seems to be over. The cost of computer equipment is actually dropping, as the COVID-fueled work-at-home buying splurge winds down.

Still, a lot is going wrong. Here are the major categories where inflation is getting worse: 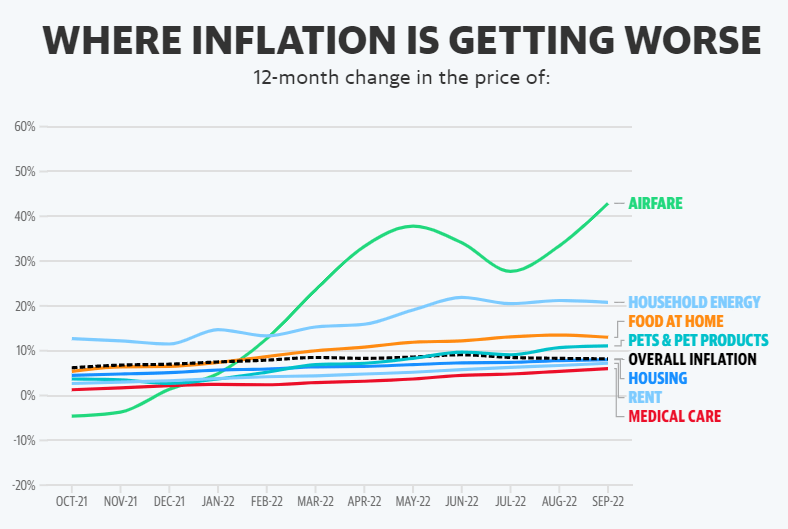 Airfare is the standout, but this isn’t that big a problem for the broader economy. Higher airfares reflect strong demand for travel—which indicates people are willing to spend on what is often discretionary activity. That’s a good thing. Jet fuel costs are also higher, which is not so good. Still, airlines got hammered during the COVID downturn, and a bit of pricing power now will help them return to normal operations.

The rising cost of housing, food and energy is a much bigger problem. Housing accounts for one-third of the typical family’s spending. Overall housing costs are up 8%, about the same rate as inflation as a whole. Yet incomes during the last year have only risen by around 5%. That means most people’s biggest expense is growing by more than their paychecks. Bad.

The cost of food is rising by 13%. Food accounts for about 12% of household spending, so again, this is an essential expenditure that’s going up by more than incomes. A hidden driver of food inflation is the cost of diesel fuel, which is up by way more than gasoline. Diesel prices are 44% higher than a year ago, and diesel is required for many of the machines that process food and the trucks that transport it. Producers are passing that higher cost on to consumers.

Another hidden source of inflation is household energy, namely electricity and heating costs. While gasoline prices have dropped into a semi-normal range, natural gas prices have not, and that’s the most common fuel utilities burn to produce electricity. In mid-September, natural gas prices were 66% higher than a year earlier, which helped push the cost of household energy up 21% in September. Gas prices have since dropped, but they’re volatile and typically go up during the winter heating season. Russia’s break with Europe as a natural gas supplier is another factor roiling the market. Price breaks during the next few months seem unlikely.

Still-high inflation means the Fed will almost certainly hike rates by three-quarters of a percentage point at its next meeting in early November. That would be the fourth such rate hike in a row, and the Fed may keep hiking after that, by smaller amounts. Investors have been hoping for better inflation news that might let the Fed ease up. It will come eventually, but markets have to keep pricing in higher long-term rates than expected just a few weeks earlier. Higher rates mean a weaker economy. Until that changes, the bad news will outweigh the good.