What happened in the economy in 2021

The pandemic remained a major force influencing growth in the U.S. economy in 2021.

But as vaccinations picked up and stay-in-place orders began getting lifted, the economy made notable strides in recovering throughout the year, albeit while remaining below pre-pandemic levels on many major metrics. But on other metrics — and notably on inflation — the economy has handily exceeded its pre-virus trends.

“We’re not going back to the same economy we had in February of 2020,” Federal Reserve Chair Jerome Powell said during his post-FOMC meeting press conference on Dec. 15. “And I think early on … the sense was that that’s where we were headed. The post-pandemic labor market and the economy, in general, will be different.”

And indeed, many aspects of economic activity have shifted since the rapid spread of the coronavirus in the U.S. in early 2020. Extraordinary monetary and fiscal policies during the crisis provided stimulus for more than a year, helping buoy economic activity and bolster consumption. And as demand for goods, services and venturing out roared back, all of these factors have coalesced to drive up prices at multi-decade high rates.

Still, concerns about the coronavirus have lingered. The discovery of the Omicron variant in late November spurred a renewed wave of restrictions globally in recent weeks. And it has raised the specter that Americans may also begin to stay home more frequently and curb spending on services.

But so far, economic growth as a whole has increased at a solid clip in 2021. U.S. gross domestic product (GDP) grew at a real annualized rate of 6.4% in the first quarter, then 6.7% in the second and 2.1% in the third, based on the latest estimate for the quarter. The size of the economy as measured by GDP surpassed pre-pandemic levels in the second quarter this year, following 2020’s brief but rapid plunge into recession.

Heading into the new year, here’s a look back at how the U.S. economy evolved throughout 2021.

The labor market has been one of the areas of the economy most profoundly impacted by the pandemic.

Jobs have come back at a steady pace throughout this year, after more than 22 million jobs were lost between March 2020 and April 2020 alone at the height of stay-in-place orders.

The unemployment rate has also come down. It last improved to a reading of 4.2% in November, but still held above the 50-year low of 3.5% seen before the pandemic in February 2020. The jobless rate began the year at 6.3% in January.

“In one sentence, what surprised me is how quickly we have recovered,” Betsey Stevenson, told former Labor Department chief economist and current professor of public policy and economics at the University of Michigan.

“If you talked to people when this pandemic first started, they were worried that employers would be looking to automate and to replace workers with technology because technology doesn’t get COVID,” she added. “And in fact, what we’ve seen is just record job openings. If we filled every single job opening that’s out there right now, we’d have employment that was not just well above where we were pre-pandemic, but well above what anyone predicted pre-pandemic.”

And while more Americans are on the sidelines of the labor force than before the pandemic, job vacancies have soared, especially in the second half of this year.

As vaccinations began ramping up in the U.S. in the spring and summer, demand for goods and services and going back out again began to surge — and hiring employers struggled to keep pace with that demand. That has especially been true for the service economy, which had already been hit hard during the pandemic with stay-in-place orders and layoffs, and was struggling to bring back enough workers to keep up with the pick-up in dining out, traveling on airplanes and shopping in stores.

In July, job openings hit a record high of nearly 11.1 million in the U.S. And as of the latest data for October, those vacancies were again above the 11 million mark. The quits rate has also remained elevated, suggesting workers have been feeling confident about their ability to leave their current jobs and find new ones. This rate came in at 2.9% in October, or just a tick below September’s all-time high of 3.0%.

The fact that labor supply has been the biggest concern than demand has also shown up in the Labor Department’s weekly jobless claims report. These hit the lowest level since 1969 in early December at 188,000.

“Conflicting signals about slack that have plagued the labor market should become more harmonious by late 2022. Early on, pandemic-induced constraints on labor supply should linger, keeping wage growth firm and helping the unemployment rate to match pre-pandemic lows next year,” wrote Deutsche Bank economists led by Matthew Luzzetti in a note last week. The firm expects the unemployment rate to reach 3.5% by the end of 2022, and then drop to as low as about 3.25% in 2023.

“Beyond, a more convincing return of labor supply should help to ease wage pressures and moderate the decline in measures of slack,” they added. “Even so, our forecast for strong growth momentum pushes the unemployment rate to the lowest level in almost seven decades by 2023.”

Inflation became a central focus for Wall Street and Main Street alike in 2021.

Outsized demand and persistent supply-side snarls throughout the second half of the year especially contributed to rising price pressures across the broad economy.

Most recently, consumer prices surged at their fastest pace since 1982 in November, with the Bureau of Labor Statistics’ Consumer Price Index (CPI) jumping by 6.8% over the same month last year. Year-over-year increases in CPI had averaged just 1.8% throughout 2019 before the pandemic.

Core personal consumption expenditures (PCE), or the Federal Reserve’s preferred inflation gauge stripping out volatile food and energy prices, last posted a 4.5% year-on-year increase in November, coming in well above the central bank’s 2% target and reaching the fastest pace since 1991. Prior to the pandemic, core inflation had consistently undershot the Fed’s benchmark, and averaged just a 1.7% year-on-year increase throughout 2019.

While supply-side constraints including labor shortages, port congestion and supply shortages have been major drivers of the increases in inflation, many economists pointed out that the more than year-long regime of ultra-accommodative monetary policy also prevented there from being a lid on price increases this year.

“Inflation jumped in 2021 on the back of supply and demand mismatches. We see inflation settling at levels higher than pre-COVID whenever these supply bottlenecks ease,” BlackRock Investment Institute strategists led by Philipp Hildebrand and Jean Boivin wrote in the firm’s 2022 Global Outlook published on Dec. 13. “One driver of this: Major central banks are living with more inflation than they would have in the past, showing a much more muted policy reaction.”

Earlier during the year, the Fed had maintained inflation would prove “transitory,” and ultimately dissipate as supply-side constraints began to attenuate and as the economic data lapped last year’s pandemic-depressed levels. This term to describe the lingering price increases was retired in late November, however, as Fed Chair Powell acknowledged the prospects of more persistent inflation.

Strength in U.S. consumer spending was one of the driving features of the recovery this year.

Stimulus from the U.S. government was one critical component of the surge in consumption at the beginning of this year, as multiple rounds of direct checks to most Americans authorized under Congress’s coronavirus relief bills helped bolster spending.

The surge and then moderation in spending has also been evident in the Commerce Department’s monthly retail sales figures. At their peak rate this year, retail sales grew 11.3% month-on-month in March alone. However, these month-over-month increases have decelerated markedly, and retail sales last grew just 0.3% in November. On a year-over-year basis, however, retail sales remained higher by 18.2%. 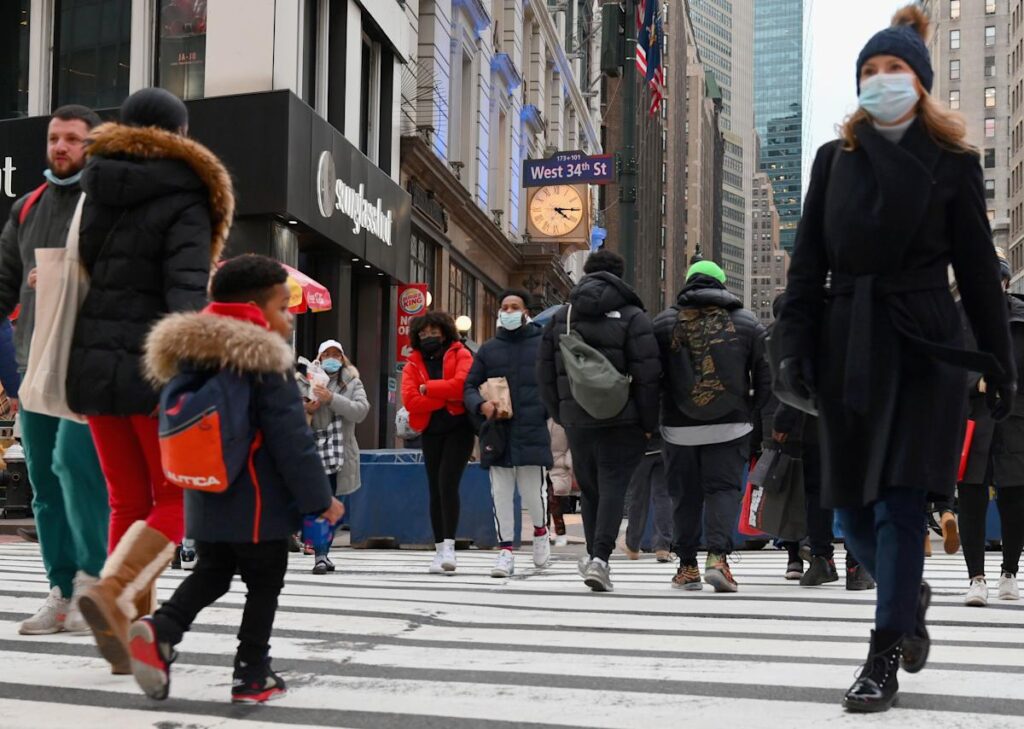 According to some economists, the slowdown in retail sales is likely to continue into next year after an initial surge in consumer demand gets further unwound.

“Evidence of accelerated holiday spending, which lifted fourth quarter consumer spending, will likely yield to a post-holiday sales vacuum as supply constraints limit the incentive to offer the deep discounting typically associated with sales activity post-holiday,” wrote Steven Ricchiuto, U.S. chief economist for Mizuho Securities, in a note. “The slowing in November retail sales, after a robust September and October, is very consistent with our overall economic assessment as supply chain concerns pulled sales forward and with little, if any, pent-up demand left in the economy.”

And while consumer spending has held up for now, prospects that persistent inflation and concerns over new coronavirus variants could curb spending going forward have also been looming. The University of Michigan’s closely watched Surveys of Consumers showed an only modest uptick in consumer sentiment in December after reaching a decade low in November. And one-year inflation expectations among consumers were unchanged at 4.9% from November to December, holding at the highest level since 2008.

The Conference Board’s Consumer Confidence Index also last posted a decrease in November to reverse course from October. The index came in at 109.5 for last month, dipping well below the 2021 high of 128.9 in June, but still rising compared to the reading of 87.1 posted in January this year. Lynn Franco, senior director of economic indicators at The Conference Board, cited “concerns about rising prices — and, to a lesser degree, the Delta variant” as cause for the most recent drop in confidence.

Ultimately, the trajectory for both the virus and inflation will be key in determining the path forward for consumer confidence and spending, some economists said.

“Even though people are making more [as] their wages have risen, they’re not rising as fast as prices are,” Megan Greene, global chief economist at Kroll Institute. “And so I think this will start to bite into demand.”

“I think we could continue to have supply chain disruptions through next year,” she added. “That means we’ll have higher prices for sure — that will drag on consumer demand. I think we’ll still grow above potential in the U.S.”