We must ‘accelerate’ on climate, equality: Salesforce Chief Impact Officer

“The theme for this year for me is acceleration,” she told. “We have to accelerate both on the climate side, and integration — how equality and climate intersect.”

Talking about climate change has gone mainstream in corporate America and regulators have begun demanding data from companies. Just last month, the SEC proposed rule changes that would force companies to disclose climate-related risks and metrics, which will be focused on greenhouse gas emissions. Salesforce, for its part, has long sought to disclose its climate data, believing that transparency improves the company’s overall impact, said DiBianca, who led the Salesforce Foundation for 17 years. Despite Salesforce’s head start, it’s an ongoing process.

“I think there’s no finish line to what the world needs to be a more just place,” she said. “Right now, it’s so much about the transition to the decarbonized economy.”

So, how does Salesforce come up with its numbers? When it’s something that’s not necessarily easy to estimate — like Scope 3 emissions from assets not owned by the company itself — “we tend to overestimate rather than underestimate,” said DiBianca. 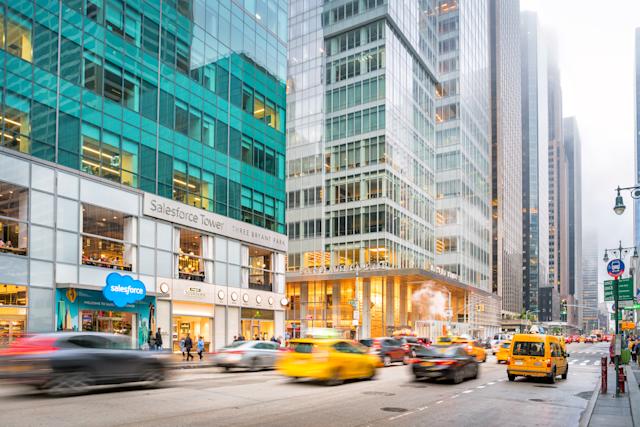 “We take the full power of Salesforce, we take what we know, and help these young founders grow their businesses,” she said.

DiBianca says looking ahead, obvious answers aren’t always the way to go. For example, at energy-intensive data centers, using strictly renewable energy isn’t necessarily ideal. To that end, Salesforce recently launched “Net Zero Cloud 2.0” in February and, for the data centers that support it, optimizing energy use is a multi-layered endeavor.

“It will always take energy to power our data centers, the question is where that energy is coming from,” she said. “Is it renewable energy? Is it wind, or solar?”

In the end, she said, for data centers, it’s “preferred” that they use some combination of renewable energy and offsetting other energy use.