Wege inflation inside of a tightening labor market is becoming more of a hot button issue within the confine’s of America’s biggest companies.

At least that’s the read in the early going of corporate earnings season.

According to Butters’ work, 60% of the 20 S&P 500 companies that have reported fourth quarter earnings have discussed a negative impact to their profits from labor inflation and shortages. To offset the labor challenges, Butters note 85% of the early reporters have said they are increasing prices. 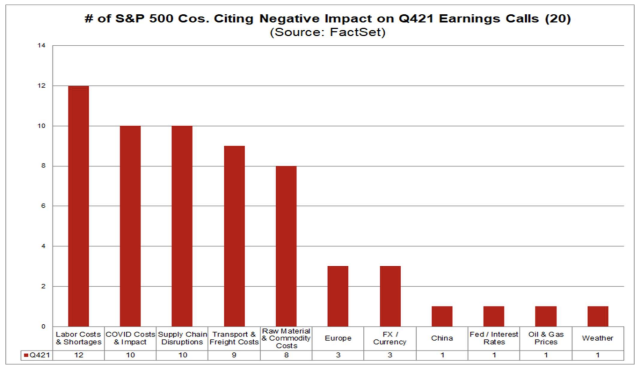 “The difficult labor market once again had the largest effect on our bottom line, representing an estimated $470 million in additional year-over-year costs. As I did last quarter, I’ll separate the effect of the labor market into two components: higher rates and network inefficiencies resulting from labor shortages,” FedEx CFO Mike Lenz told analysts on a mid-December earnings call.

Pressure on the labor line of companies continues to play out in eye-popping inflation being dumped on the plate of consumers.

The Bureau of Labor Statistics’ December CPI reading showed prices rose at a 7.0% year-over-year clip at the end of 2021, marking the fastest increase since 1982. Gains reflected strong increases in the prices of shelter and used vehicles, among other items. The headline increase matched economist estimates, and accelerated from November’s already elevated 6.8% increase.

Within the report, the food at home index rose 6.5% over the last 12 months, compared to a 1.5% annual increase during the last 10 years.

In order to get inflation under control, most economists think the Federal Reserve will hike interest rates seven times by the end of 2023. Others on the Street are more aggressive in their rate expectations.

“Our economists expect the Fed will begin its hiking cycle at the March meeting and hike a total of four times in 2022. They expect an additional three hikes in 2023 and three hikes in 2024,” Goldman Sachs strategist Ben Snider said.