CGAU, SAND, and KNT.TO are top for value, growth, and momentum, respectively.

Gold has long been regarded as a safe haven in times of market turmoil. Many investors have gained exposure to the precious metal by buying stocks of companies engaged in exploration and mining. Some of the major players in the gold industry include Canada-based Franco-Nevada Corp., Newmont Corp., and Australia-based Newcrest Mining Ltd.

These market performance numbers, and all statistics in the tables and company developments below, are as of Sept. 22, 2022.

Here are the top five gold stocks with the best value, fastest growth, and most momentum.

Value investing is a factor-based investing strategy that involves picking stocks that you believe are trading for less than what they are intrinsically worth, usually by measuring the ratio of the stock’s price to one or more fundamental business metrics. A widely accepted value metric is price-to-earnings (P/E) ratio. Value investors believe that if a business is cheap compared with its intrinsic value—in this case, as measured by its P/E ratio—then the stock price may rise faster than that of others as the price comes back in line with the worth of the company.

These are the stocks with the lowest 12-month trailing P/E ratio. 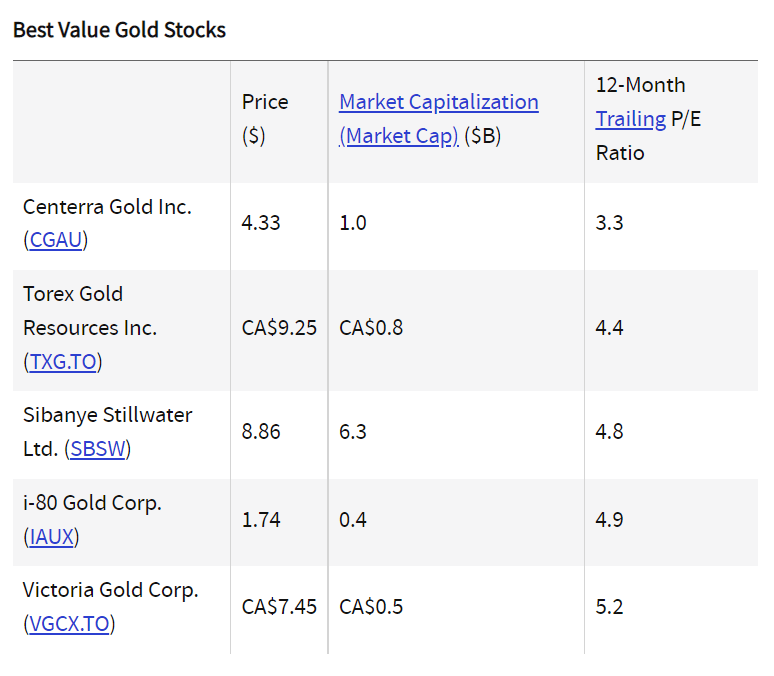 These are the top gold stocks as ranked by a growth model that scores companies based on a 50/50 weighting of their most recent quarterly YOY percentage revenue growth and most recent quarterly YOY earnings-per-share (EPS) growth. Both sales and earnings are critical factors in the success of a company. Therefore, ranking companies by only one growth metric makes a ranking susceptible to the accounting anomalies of that quarter (such as changes in tax law or restructuring costs) that may make one figure or the other unrepresentative of the business in general. Companies with quarterly EPS or revenue growth of more than 2,500% were excluded as outliers. 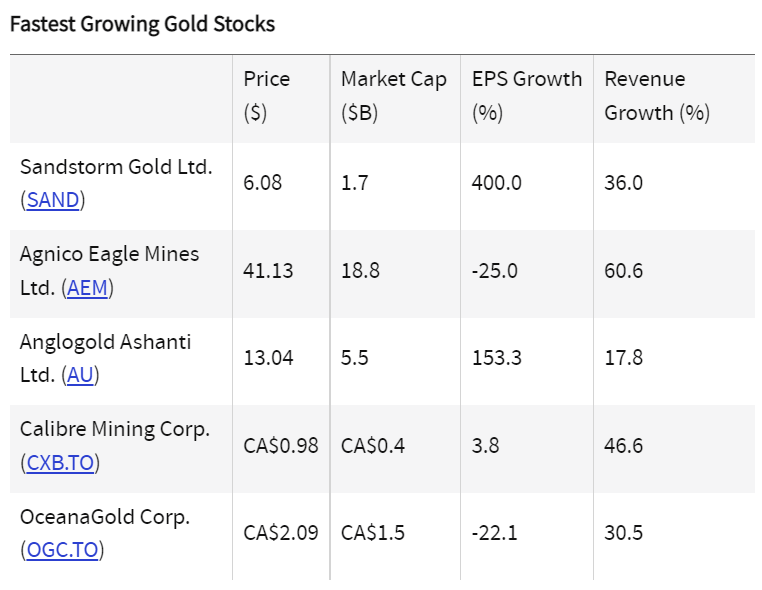 Gold Stocks With the Most Momentum

Momentum investing is a factor-based investing strategy that involves investing in a stock whose price has risen faster than the market as a whole. Momentum investors believe that stocks that have outperformed the market will often continue to do so because the factors that caused them to outperform will not suddenly disappear. In addition, other investors, seeking to benefit from the stock’s outperformance, will often purchase the stock, further bidding its price higher and pushing the stock higher still.

These are the gold stocks that had the highest total return over the last 12 months. 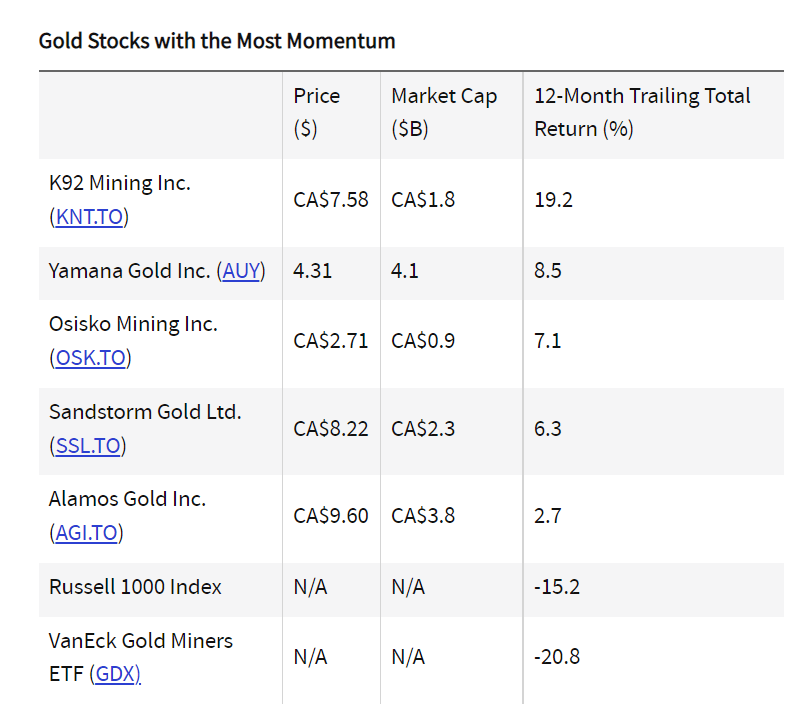 The Impact of the U.S. Dollar on Gold Stocks

The U.S. dollar, or greenback, has had a longstanding relationship with gold dating back to the introduction of the gold standard in the 1880s, where paper money was directly linked to a specific amount of the yellow metal. Although former president Franklin D. Roosevelt removed the gold standard in 1933, the Greenback still closely correlates with gold—and subsequently gold stocks—as the metal is priced in U.S. dollars.

Although the U.S. dollar and gold often have an inverse relationship, both can move in the same direction. For example, during periods of global uncertainty, both assets may rise as investors flock to safe-haven investments. Due to its finite supply, gold is seen as a hedge against inflation, while the greenback’s status as the global reserve currency makes it sought after during times of risk aversion.

Advantages of Holding Gold Stocks in Your Portfolio

Leveraged Upside and Diversification: Buying gold stocks allows investors to effectively take a leveraged bet on the yellow metal’s price, as miners can increase production and grow their sales when gold rises in value. Because gold stocks closely follow the commodity’s price, the sector also provides a partial hedge against inflation, helping to diversify a “risk-on” equity portfolio.

Gold Discoveries: Large discoveries can significantly increase gold mining stocks’ prices, particularly if a junior miner has a small market capitalization. For instance, Canadian junior explorer Enduro Metals Corporation (ENDMF) announced that it had intersected gold in one of its mines in May 2021. Subsequently, shares of the $32.43 million miner more than doubled over the next several months.