These Are The Best Robinhood Stocks To Buy Or Watch Now

Buying a stock is deceptively easy, but purchasing the right stock at the right time without a proven strategy is incredibly hard. So, what are the best Robinhood stocks to buy now or put on a watchlist? At the moment, General Motors (GM), Costco (COST) and Catalyst Pharmaceuticals (CPRX) are standout performers, at least relatively.

Unlike misfiring meme stocks such as GameStop (GME) and AMC Entertainment (AMC), these stocks offer a mix of solid fundamental and technical performance.

There are thousands of stocks trading on the NYSE and Nasdaq. But to generate big gains you have to find the very best. The best Robinhood stocks for investors will be those that offer a mix of earnings and stock market performance.

The CAN SLIM system offers clear guidelines on what you should be looking for. Invest in stocks with recent quarterly and annual earnings growth of at least 25%. Look for companies that have new, game-changing products and services. Also consider not-yet-profitable companies, often recent IPOs, that are generating tremendous revenue growth.

The Market Is Key When Buying Robinhood Stocks

A stock market rally that kicked off 2022 soon fell on its face. While the market battled back amid a better than expected earnings season, the previous uptrend failed amid disappointing inflation data. The market had been trying to battle back, with the S&P 500, the Nasdaq and the Dow Jones Industrial Average all powering off lows for the year.

The confirmed uptrend has resumed after the market rallied on a cooler-than-expected CPI report and action since has been constructive. Now is the time to get back into the market, though exposure should be increased in a measured fashion. Focus on fundamentally strong stocks coming out of sound chart patterns, such as those in the IBD 50. These names will tend to have rising relative strength lines. The stocks below are good candidates.

It is key for investors to keep their wits about them given the current challenging nature of the market. It is also key to stay on top of sell signals as not every trade will work out, even in an uptrend. Any stock that falls 7% or 8% from your purchase price should be jettisoned. Also beware of sharp breaks below the 50-day or 10-week moving averages.

Remember, there is still significant headline risk. Inflation remains a key issue while the Russia-Ukraine conflict is a wild card that has proved its ability to shake the market. Rising troubles in China due to rising Covid infections and unrest over lockdowns could also spook indexes.

Now let’s look at GM stock, Costco stock and Catalyst Pharmaceuticals stock in more detail. An important consideration is that these stocks are solid from a fundamentals perspective, while institutional ownership is also strong. They are also part of the Robinhood Top 100 Stocks, the platform’s most popular stocks among traders.

GM stock is trading in a buy zone after moving back above a cup-with-handle base ideal entry point of 40.20, MarketSmith analysis shows.

On a weekly chart, GM now has a handle with a 41.68 buy point. But a downward-sloping trendline gives another “early” entry around the still-valid 40.20 buy point on a daily chart.

General Motors stock is back above the key 50-day moving average, though much of the base formed below it. GM forged the handle right around the 200-day line.

The RS line is taking a pause once again after fighting back from a recent dip. It remains off highs for the year.

Stock market performance and earnings are moving roughly in lockstep. The stock has been rebounding of late but has more work to do to recoup its losses for the year. 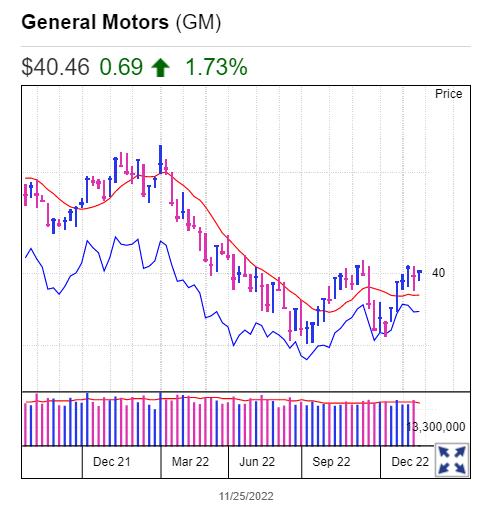 Big money has been buying up the stock of late, which is reflected in its Accumulation/Distribution Rating of B. In total, 48% of its stock is held by funds.

One key part of the CAN SLIM formula that GM is pursuing is the N, which stands for New Products. GM has said it hopes to phase out the sale of ICE light vehicles by 2035.

At a Nov. 17 investor day GM gave updated guidance. GM expects to produce 400,000 EVs in North America from 2022 to mid-2024 as its five assembly plants ramp up. By the end of 2025, General Motors plans to produce 1 million EVs annually in both North America and China.

GM estimates it will sell 44,000 electric vehicles in the U.S. this year for a loss. But CEO Mary Barra said at the event she expects new EV profits to be in-line with gasoline cars and trucks by 2025. GM’s calculations factor in federal incentives under the Biden administration’s Inflation Reduction Act that will effectively subsidize EVs.

The firm now expects adjusted automotive free cash flow between $10 billion and $11 million, up from its earlier guidance of $7 billion to $9 billion for the year.

For General Motors an EV ramp is key as it attempts to compete with Tesla (TSLA).

GM aims to deliver 400,000 EVs in North America through 2024. But its pricey new Hummer and Lyriq EV models sold less than 500 units combined last quarter, with an older but refreshed Chevrolet Bolt model comprising the bulk of its EV sales.

Next year, the automaker plans to increase Bolt EV production by nearly 60%. In 2023, GM also plans to launch the first all-electric versions of the Silverado truck, Blazer SUV and Equinox SUV crossover, all from its Chevrolet brand, which is known for value.

Along with earnings, auto industry forecasts are under close scrutiny. Investors and industry watchers are bracing for any signs of weaker demand as interest rates rise and recession fears grow. GM CEO Mary Barra said “demand continues to be strong,” echoing similar statements from both GM and Ford management earlier in October.

Costco is also one of the best Robinhood stocks to buy or watch now. At the moment it is one for the watchlist after it formed a new cup base. It has some way to go before it reaches the potential entry point of 564.85.

One bugbear is the stock’s relative strength line. It has been moving sideways of late. Nevertheless, Costco remains in the top 19% of stocks in terms of price performance over the past 12 months.

The stock is showing renewed strength. It has clambered back above the key 50-day and 200-day moving averages in short order. Rallying back above these levels is a positive development.

In late September, Costco reported quarterly earnings of $4.20 per share. This was a 12% increase on the previous year and was above analyst expectations.

Unlike rival Sam’s Club, Costco CFO Richard Galanti said during the Q4 earnings call that a membership fee increase is not yet coming.

“There are no specific plans regarding a fee increase at this time. We’re pleased with our growth in both top line sales and membership households over the last several quarters,” Galanti said. “We’ll let you know when something is about to happen.”

Costco currently has two tiers of membership at $60 and $120.

While Walmart and Target have been struggling with excess inventory as customers deal with inflationary pressures, Costco is demonstrating the benefit of its model.

Costco might be the only retailer selling both $1.50 hot dogs and $250,000 diamond rings under the same roof. You can also buy a tank of gas, a chicken coop or a funeral casket there while you’re at it. This is a huge part of Costco’s allure.

It sells a large variety of items inside a chain of nondescript warehouses and charges customers a $60 membership fee just to get in the door. Costco’s buy-in-bulk branding also makes it an ideal place for consumer stockpiling.

Catalyst Pharmaceuticals is actionable now after it cleared a cup-with-handle entry of 16.76 entry. Investors may opt to be more cautious given CPRX stock is significantly extended from the 50-day line.

After tumbling from Sept. 13 intraday to Sept. 23, shares have bounced back, forging a new consolidation.

The consolidation follows a strong run from a cup base in July, so upside may be limited for a while as it digests gains.

Catalyst Pharma has made a brilliant run following a breakout at 8.74, a rarity among low-priced stocks. 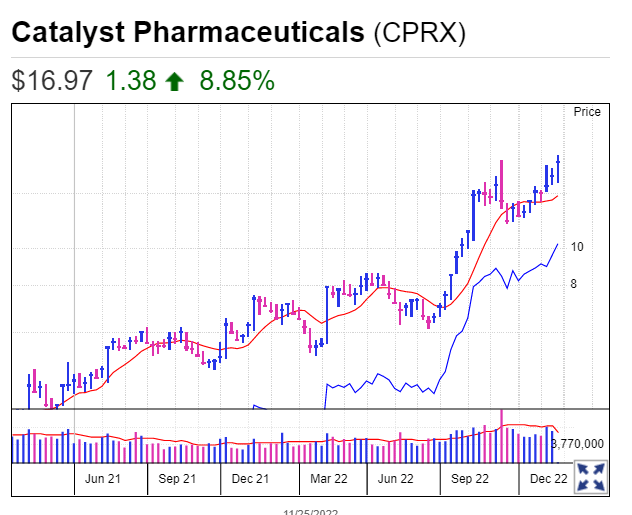 It soared after a solid earnings report. CPRX has moved as high as 91% above its 200-day moving average, which means its pullback was not surprising.

The biotech develops and commercializes therapies for people with rare debilitating chronic neuromuscular and neurological diseases.

The firm recently trounced Wall Street’s third-quarter forecasts. During the September quarter, sales surged more than 59% to a record $57.2 million, easily beating forecasts for $53.7 million, according to FactSet. Earnings popped 86% to 26 cents per share.

At the end of Sept. the firm said that the FDA had approved its supplemental New Drug Application to expand the age range for Firdapse tablets to include pediatric patients, six years and older. This is used to treat Lambert-Eaton myasthenic syndrome (LEMS).

The company also offers Ruzurgi for the treatment of pediatric LEMS.

Catalyst Pharmaceuticals is a member of IBD Sector Leaders, IBD’s most stringent and powerful screen.