These Are The 5 Best EV Stocks To Buy

EV stocks have multiplied in Tesla’s (TSLA) wake and as electric cars look to go mainstream — but not all are created equal. Some car stocks are more ready than others for an electric future. Here are the top-rated EV makers and EV-related plays.

The charts of most EV stocks are under strain. Broadly, both established automakers and startups are a speculative bet on electric vehicles, itself seen as a nascent field. They have suffered as a risk-off sentiment prevails in the current market, and as shortages of key components drag on.

The electric-car stocks and EV plays below have the best mix of fundamentals and technicals.

Tesla stock, the top auto and EV stock by market capitalization, has an IBD Composite Rating of 95 and an EPS Rating of 77. Tesla (TSLA) also earns an RS Rating of 94, meaning that it has outperformed 94% of all stocks in IBD’s database over the past year.

The IBD 50 stock offers an aggressive entry as it moves above 300 and snaps a downtrend from the April high. Investors also could use the short-term high of 314.64, set on Aug. 16, as an early buy point. 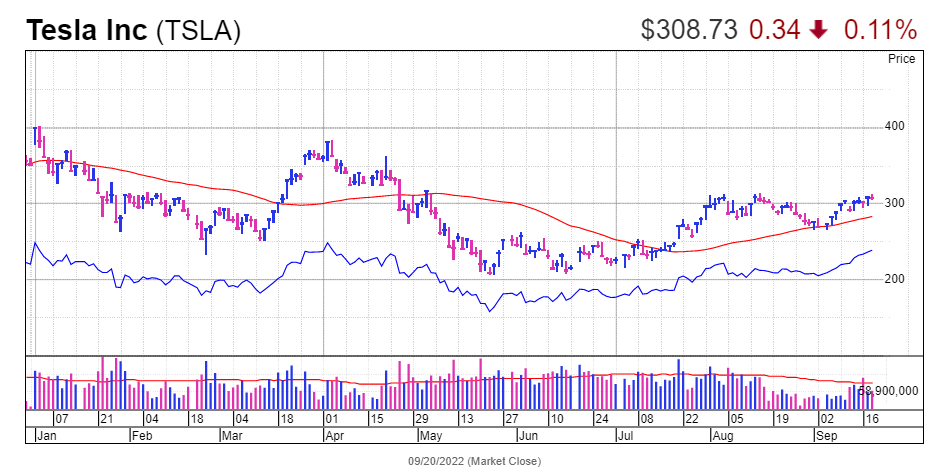 Tesla makes four models, primarily the Model 3 sedan and the Model Y crossover SUV. It also plans the Cybertruck, Semi and Roadster, for which launch dates have been pushed back. The global EV leader expects to grow vehicle deliveries 50% annually. In 2021, EV deliveries surged 87% to nearly a million. 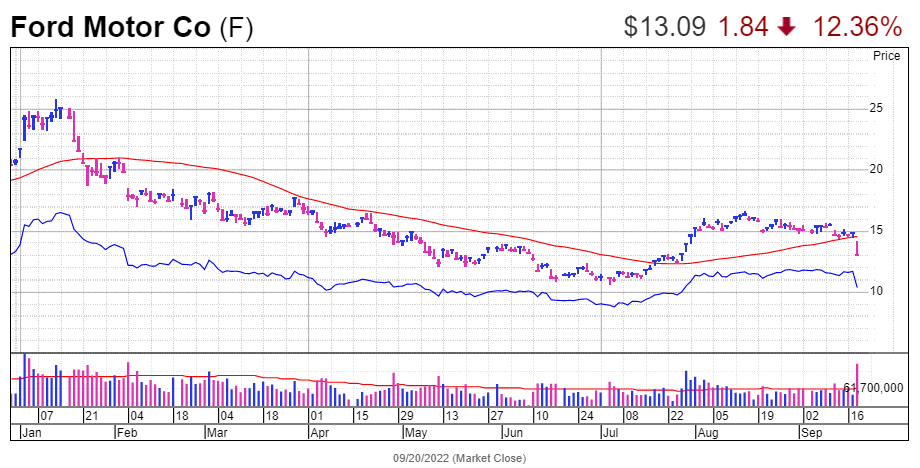 A semiconductor manufacturer, WOLF stock is seen as a play on the growth of electric vehicles. The company makes silicon carbide chips, which can handle higher voltages and are more power efficient than traditional silicon chips. That could mean faster EV charging and improved driving range. WOLF stock earns a spot on the IBD Leaderboard. Peer ON Semiconductor (ON) is on the IBD 50 list.

As investors look for a turnaround, Nio stock has staged a strong rally from its May low. It now shows a 24.44 buy point from a bottoming base. Shares rallied on expectations for a recovery in Nio deliveries. 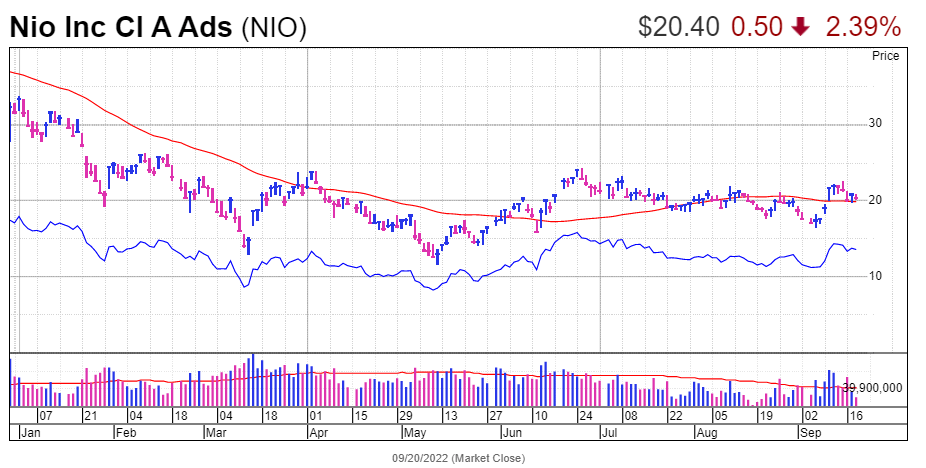 New Nio EVs and refreshed older models could fuel the Chinese EV startup’s return to growth. Nio is sometimes called the Tesla of China because of its premium, high-tech EV models. 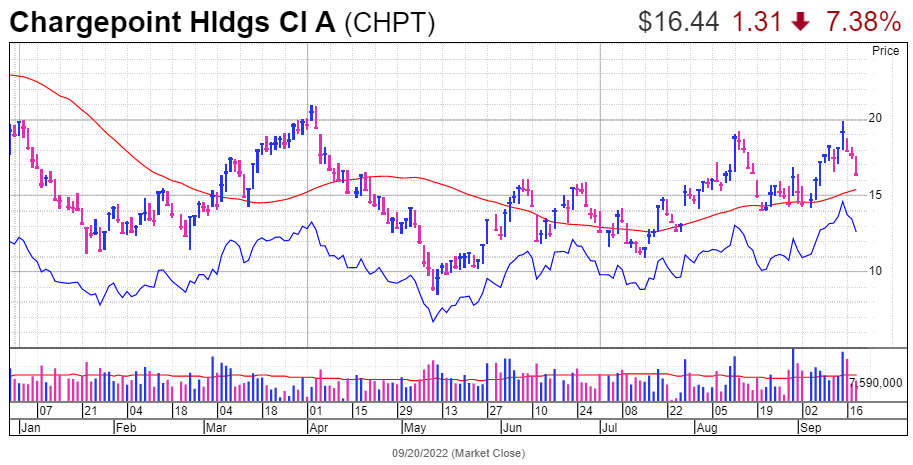 ChargePoint offers 200,000 public places to charge across its EV charging network in North America and Europe. It should benefit from the Inflation Reduction Act, which aims to boost EV charging infrastructure in the U.S. The dearth of public chargers is a bottleneck in the adoption of electric cars. 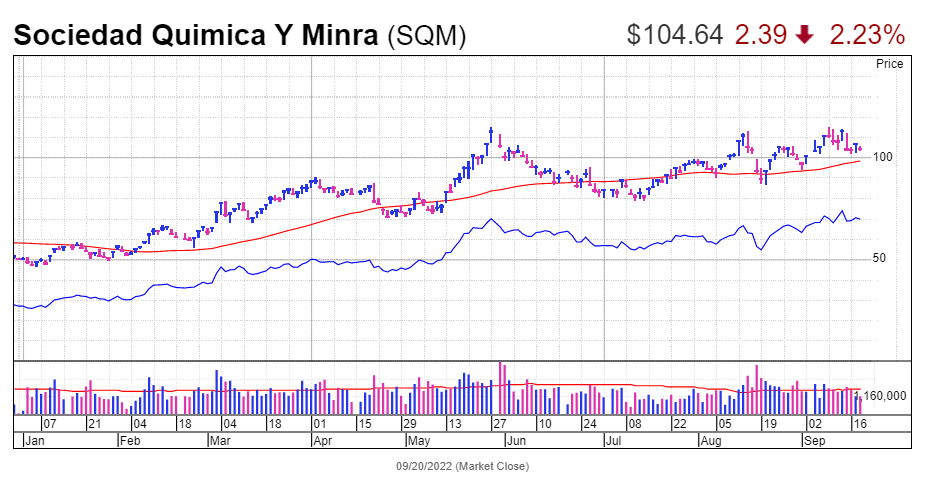 Chile’s SQM is riding the global adoption of electric vehicles, which use lithium batteries. Demand for lithium, a critical EV battery material, has been outpacing supplies, sending prices soaring.

Are EV Stocks A Good Buy?

Companies with two characteristics generally make the best candidates for stocks to buy and watch, according to CAN SLIM guidelines. First, they need a strong track record of earnings growth. Second, they should be technically strong and be shaping bullish chart patterns.

Most of the new EV startups have neither. Those EV stocks include Fisker (FSR), Canoo (GOEV), Faraday Future (FFIE), Lordstown (RIDE) and Xos (XOS). In fact, many of the startups aren’t producing electric vehicles yet.

The growing universe of EV stocks doesn’t end with carmakers. A constellation of other companies provide car batteries, car charging stations, electric motors and other EV-related products. Among them are ChargePoint (CHPT), EVgo (EVGO), Blink Charging (BLNK) and Wallbox (WBX).