These 2 Penny Stocks Could Rally to $15 (Or More), Says Roth Capital

There are few stock segments more polarizing than the ‘pennies.’ These are low-cost equities, typically priced below $5 per share, and they elicit two distinct responses from investors. Some buyers can’t get away from the pennies fast enough; while for others, these shares have a magnetic attraction. And no matter what any particular investor thinks of the pennies, it’s impossible to deny that these stocks present a fascinating picture of advantages and disadvantages.

On the plus side of that ledger, the penny stocks offer what is likely the market’s best possible combination of entry cost and potential gain. At their low price, investors can pick up more shares on a budget – and by starting so low, even a small gain in absolute value will quickly turn into a large gain by percentage of investment. However, it’s wise to remember that there could be a very good reason these shares are priced so low.

The key here is to find the difference between penny stocks priced low due to poor fundamentals, and those whose prices are low due more to bad luck or simple prevailing market conditions.

And that’s where investment banking firm Roth Capital comes in. The firm’s analysts, who specialize in the small-cap segment of the market, have picked out two penny stocks for particular attention. In Roth’s view, they both ripe for a surge to $15 or more.

We’ll start with Syros Pharma, a clinical-stage biotech company working on new small-molecule therapeutic agents. The company’s drug candidate programs are designed to control and modify gene expression as an approach for the treatment of cancer and genetic diseases. Syros currently has three programs at various stages of clinical trials.

The most advanced clinical candidate is tamibarotene, an orally dosed, selective retinoic acid receptor alpha (RARalpha) agonist. The drug candidate is under development as a treatment for genetic diseases defined by overexpression of the RARA gene; the drug targets a genomically defined subset of patients in this category. Tamibarotene is undergoing two clinical trials. The Phase 3 SELECT-MDS-1 trial focuses on RARA-positive patients with newly diagnosed higher-risk myelodysplastic syndrome (HR-MDS), while the Phase 2 SELECT-AML-1 trial is testing the drug in RARA-positive patients with newly diagnosed unfit acute myeloid leukemia (AML).

The company’s second drug candidate program is SY-2101, or oral arsenic trioxide (ATO), under development as a treatment for acute promyelocytic leukemia (APL) in newly diagnosed patients. The trial is expected to show pharmacokinetic and safety data from the dose confirmation trials by the middle of this year, and is scheduled to initiate a Phase 3 pivotal trials in 1Q23.

Syros also has an active Phase 1 trial program for SY-5609, an oral CDK7 inhibitor. This early stage trial is testing the drug candidate against several cancers, including relapsed/refractory metastatic pancreatic cancer, BRAF-mutant colorectal cancer, and relapsed/refractory hematologic malignancies. Data from this trial is expected late this year and on into 2023.

In addition to an active clinical program, Syros is fortunate enough to have a modest revenue stream, derived from collaboration agreements with Global Blood Therapeutics and Incyte Corporation. In its last reported quarter, 4Q21, Syros received $6.5 million from the former and $1.3 million from the latter.

As there are multiple potential catalysts on the horizon, Roth Capital analyst Zegbeh Jallah argues that its $0.95 share price reflects an attractive entry point.

“With three readouts ahead, we struggle to understand why Syros trades at [$0.95]… Recall, that ongoing is a Phase 2 (SELECT-AML) study of Tamibarotene + VenAza in ND unfit RARa+ AML patients, and data from the safety lead-in portion remains on track for 2H2022, which could be a major catalyst… Also recall that SY-2101 is being evaluated in a Phase 3-dose-confirmation study, and safety/PK data are on track for mid-2022. Safety, PK and dosage data were already established in a Phase 1 study, however, management wanted reassurance that the right dose will be moved into Phase 3, and the study also allows for a comparison of the oral vs IV ATO that has already been shown to be effective. Thus, we can expect additional PK to establish that the overall exposure profile makes sense for an oral drug, and the convenience of SY-2101 could be a game-changing for patients,” Jallah wrote.

In line with his optimistic take, Jallah rates SYRS a Buy. The analyst also sets a price target of $23, suggesting a whopping upside of 2,346% in the next 12 months.

Roth Capital is hardly the only Wall Street firm bullish on this stock, or a bit confused by the low price. Syros has a unanimous Strong Buy consensus rating, based on 6 recent analyst reviews. At $16.83, the average price target brings the upside potential to 1638%. 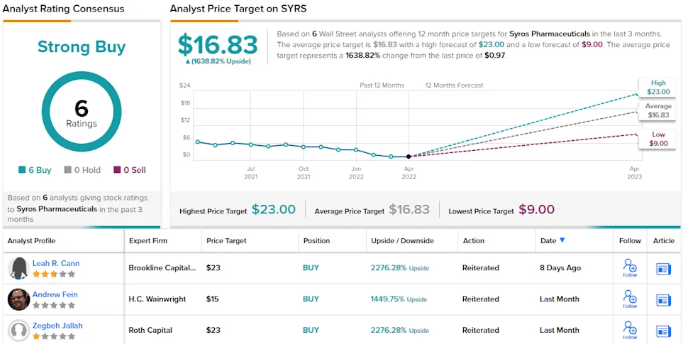 Now let’s change gears, and take a look at an agricultural company. Agrify is a leader in indoor growing systems, and provides advanced tech for cultivation and extractions solutions in the cannabis industry. The company’s chief product is its Vertical Farming Unit (VFU) system, a proprietary micro-environment-controlled indoor growing technology, which allows for higher yields per square foot, greater consistency of product, and a stronger ROI at any scale.

Agrify is set to release its 1Q22 financial results next month, but we can get a feel for the company’s status by looking back at the fourth-quarter results. The company’s top line came in at $25.3 million, up 481% from the year-ago quarter. The full-year revenue was up 395% year-over-year to $59.9 million. Agrify reported $377 million in new bookings for 2021, up 919% from the $37 million in bookings from 2020. Looking forward, the company has a work backlog totaling $837 million, up 1,319% from the previous year, and a strong indicator of future business.

Among the bulls is Roth Capital analyst Scott Fortune, who sees the TTK as the key to Agrify’s future success. He writes: “Our long-term thesis on AGFY remains intact and view 2022 as a year of execution for management to setup the pivotal 2023 inflection to high margin SaaS revenue. Converting the potential sales pipeline into TTK deals remains the primary driver for the company. We view the market demand for TTK’s as favorable with NJ coming online 2Q22, CT and NY potentially 4Q22, and additional licenses approved in IL and MA. We expect growing demand for cannabis derivative products to drive additional extraction growth, generating revenues from extraction solutions of $62M-$65M in ‘22.”

In line with this upbeat view, Fortune rates AGFY a Buy, and his $15 price target indicates his belief in ~311% one-year upside for the stock.

There is plenty of optimism for Agrify on Wall Street, as shown by the Strong Buy consensus rating. The stock has 4 recent analyst reviews, including 3 Buys and 1 Hold. The shares have a current trading price of $3.66, and their $11.75 average target implies ~222% upside from that level. 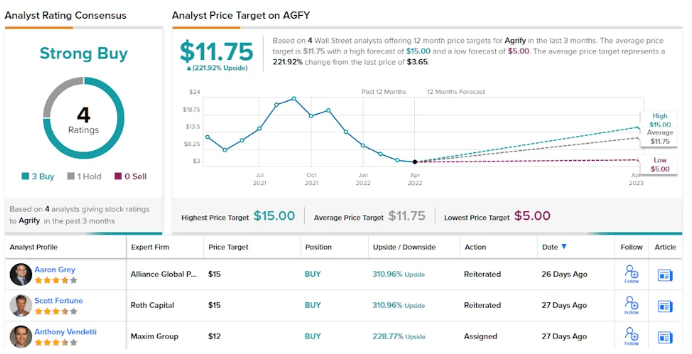