The outlook for stocks in 2023 is still in flux. Last year’s headwinds haven’t dissipated, so we’ll be dealing with high inflation, rising interest rates, the Russia-Ukraine war, and an increased risk of recession for the foreseeable future, and that has investors taking an interest in defensive plays.

The classic move, of course, is to move heavily into dividend stocks. These bring several advantages that can protect an investment portfolio during an unsettled economic period, including a reliable income stream, and potential to beat inflation through the dividend yield. It’s even possible to find dividend stocks that offer a combination of double-digit upside potential and payment yield – a solid combination that will maximize their defensive advantages.

Wall Street’s analysts are taking note of these, including some of the Street’s leading names. Nitin Kumar – one of the 5-star analysts with Mizuho Securities, and ranked among the top 25 analysts by TipRanks – has been searching the market for dividend champs – and he points out two stocks yielding 10% or better. That’s more than enough, on its own, to assure a positive real rate of return, but each of these stocks also brings over 20% upside potential to the table. Let’s take a closer look.

First up is Chesapeake Energy, an exploration and development company in the North American hydrocarbon industry – which is a fancy way of saying that it’s a company that looks for, and exploits, natural gas and petroleum deposits. Chesapeake has operations across North America, with particularly large assets in Pennsylvania’s Marcellus shale and Louisiana’s Haynesville formation. More than two-thirds of Chesapeake’s proven reserves are in natural gas, with significant amounts of petroleum and natural gas liquids also present. Chesapeake holds assets in the Eagle Ford formation of Texas, but is making efforts to divest from that position in order to focus on its high-profit holdings in Pennsylvania and Louisiana.

In its last set of reported financial results, for 3Q22, Chesapeake showed total revenues of $4.19 billion, more than doubling from the $1.63 billion reported in 3Q21. Following from the revenues, Chesapeake showed cash from operations of $1.3 billion and net income of $883 million. The company’s EPS came in at $6.12 per diluted share; the non-GAAP adjusted net income was $5.06 per diluted share, a gain of 112% from the prior-year quarter.

In addition to these sound results, Chesapeake had a Q3 free cash flow of $773 million. This was a company record, and was achieved even as the company’s share repurchases and dividend payments totaled more than $1.9 billion during the quarter.

Chesapeake’s last common share dividend was paid on December 1, and the combination of regular and supplemental dividend payments came to $3.16 per share. At that rate, the dividend annualizes to $12.64 and yields a sky-high 14%. This is almost double the last reported inflation numbers.

Extrapolating forward from this position, Kumar rates CHK shares a Buy, and sets his price target at $155, indicating confidence in a solid one-year upside potential of ~76%. Based on the current dividend yield and the expected price appreciation, the stock has ~90% potential total return profile.

Wall Street seems to be in agreement with Kumar on this one as all 8 of the recent analyst reviews on Chesapeake are positive, giving the stock its unanimous Strong Buy consensus rating. The shares are trading for $88.23 and their $145.88 average price target implies 65% upside for the coming year. 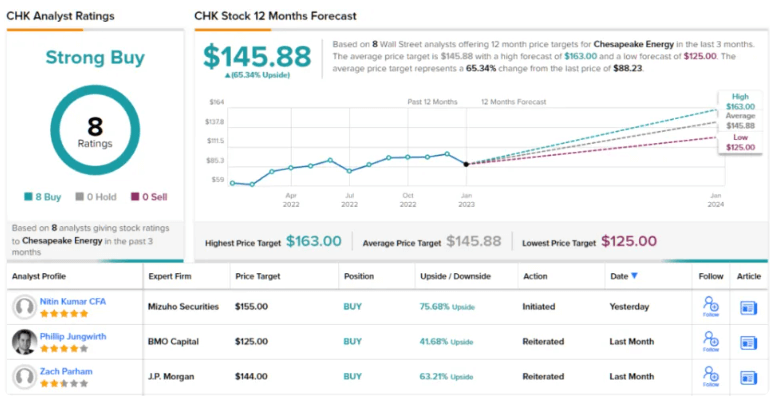 The next high-yield dividend stock we’re looking at is Pioneer Natural Resources. This firm is based in Irving, Texas, and like Chesapeake, it’s a hydrocarbon exploration and production company. Pioneer operates in the West Texas Permian basin, the world’s second-largest oilfield. Pioneer is a major asset holder in the region, and is a pure-play Permian producer.

During the third quarter of 2022, the last for which financial results have been released, Pioneer produced an average or 656,582 barrels of oil equivalent (BOE) per day. This was down slightly year-over-year, by 2.8% from 3Q21, but was still enough to generate over $6.09 billion in revenue, for a top-line gain of 36.5% y/y. Pioneer’s high revenue supported $2 billion in net income attributable to common shareholders, or $7.93 per share. In non-GAAP terms, these income numbers came to $1.9 billion, or $7.48 per diluted share. The non-GAAP EPS was up 81% from 3Q21.

Pioneer’s cash flow from operations in 3Q22 was $3 billion, and the company’s free cash flow was $1.7 billion. The company’s strong cash flows gave management confidence to continue its share repurchase program and dividend payments; during the quarter, the company bought back $500 million worth of shares, and declared a total dividend (base plus variable) of $5.71 per common share. The dividend was paid out on December 15.

At its current rate, the combined dividend payment annualizes to $22.84 and gives a yield of 10%. This is approximately 5x the average dividend yield found among S&P-listed companies.

All of this caught the attention of Mizuho’s Kumar, who laid out a bullish take on the stock. He writes, “We believe management will execute on its strategy of bringing forward value by focusing on higher-return inventory – a luxury they can afford in our opinion given their long runway of projects… This should refocus investors on the strong cash return program that is complemented by one of the largest reserve bases in U.S. shale…”

As indicated by his stance, Kumar rates PDX a Buy, while his price target, at $294, implies a one-year gain of 28%.

Overall, PDX stock has 16 recent analyst reviews, with a breakdown of 7 Buys, 8 Holds, and 1 Sell giving a Moderate Buy consensus rating. The average price target of $285.27 suggests 24% upside potential on the 12-month horizon. 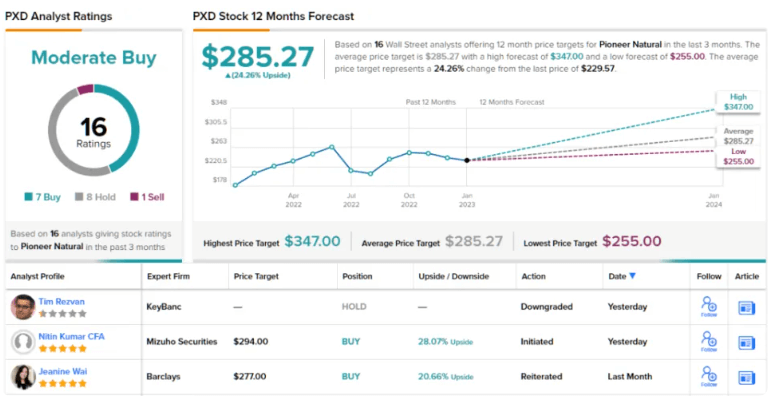