The stock market is depressed, and apparently that’s great

Markets have rallied nicely off the early March lows that were triggered by the start of Russia’s war on Ukraine, but they are still dealing with a bout of depression.

The percentage of individual investors who consider themselves bullish has averaged just 23.9% over the past 10 weeks, according to the American Association of Individual Investors (AAII). Truist co-chief investment officer Keith Lerner points out this is the lowest average level of bullishness since the June 2016 Brexit referendum and one of the least optimistic readings since the survey’s inception in 1987.

So what has this level of depression historically meant for the stock market in the months ahead? You guessed it, a rally!

Historically, these low levels on the survey have been followed by consistent and positive returns on a six- to 12-month basis for the S&P 500, Lerner notes.

Only in the land of investing does bad equal good (maybe it does in other places, who knows).

“Part of the market’s resilience can be attributed to depressed investor expectations, which suggests markets are already braced for and discounting some of the known challenges. Markets have also taken the recent shift in Fed policy in stride given investors were already pricing in an aggressive rate path. Historically, the first rate hike tends to inject volatility, but it does not typically end a bull market,” Lerner explains of the market’s recent show of force.

All of this bizarre hopefulness could turn on a dime in the current environment, however.

President Biden is off to meet with European leaders this week on the Russia-Ukraine crisis. Any headline from that event could send markets tanking, easily. Nike’s earnings are out after the close today — the company is a bellwether, so a poor conference call and outlook will not be taken well by investors (chatter on the Street is bracing for a Nike warning). Fed members will likely be talking to the media circuit following their meeting last week, too.

But barring a headline disaster, Defiance ETF co-founder Sylvia Jablonski perhaps best summarizes the mindset in the markets that could endure in the near-term.

“Investors are starting to see a tradeable bottom,” Jablonski said.

Back on the road: “Things” are coming back to New York City after two-plus years of the pandemic, and it’s great to see. For my profession, “things” often equate to thought-provoking, in-person events/meetings with interesting folks. Two that made their way onto my calendar recently. First, I spent some time with Diageo’s CEO Ivan Menezes and his team following an investor day in the city. We were taken around the company’s HQ (yes, there is a wraparound bar there) to see what the maker of Don Julio tequila, Guinness beer and other top brands is working on. I (and I think others in attendance) came away very impressed. The company is moving into super premium liquors (think $350 rare tequila that sells out instantly) and alcoholic hard seltzer-like drinks (hard seltzer players such as Boston Beer should be worried). Why Diageo has done well financially in recent quarters despite bars still being hampered by the pandemic truly came to life here. Based on what I saw and convos I had (and considering this could be a strong summer of going out), the stock looks too cheap at 21 times forward earnings. Below is some visual eye candy — the first paper bottle for Johnnie Walker. 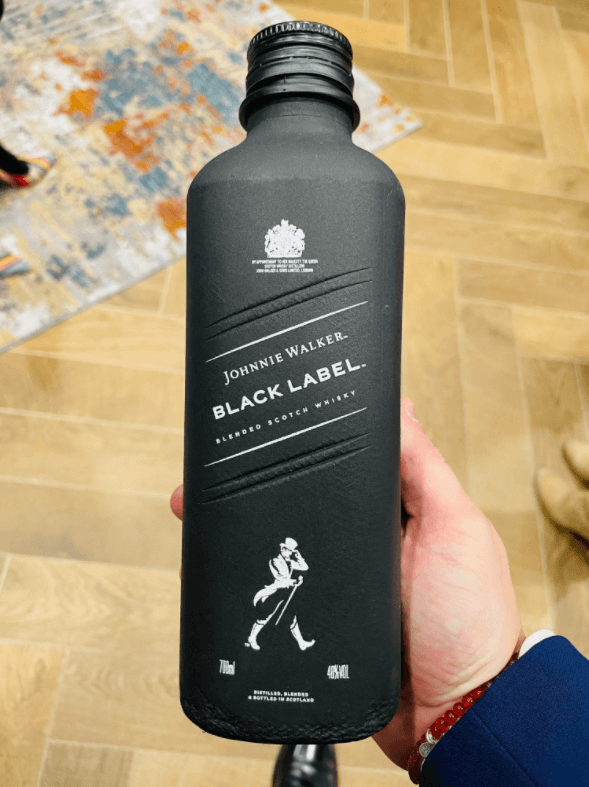 Another event I hit up was the CEO Summit — hosted by the always charismatic ServiceNow CEO Bill McDermott. I won’t get into too much detail on this event, except to say I chatted with several software bankers. My general sense is that (1) the sell-offs in high multiple software stocks like Snowflake (and others) may be nearing max exhaustion (useful chart from Jefferies’ Brent Thill below to put a finer point on this + see the Thoma Bravo for Anaplan $10.7 billion deal today); and (2) keep an eye on the performance of Amazon Web Services, its cloud dominance is being chipped away at, perhaps more than people think (Microsoft was called out consistently). 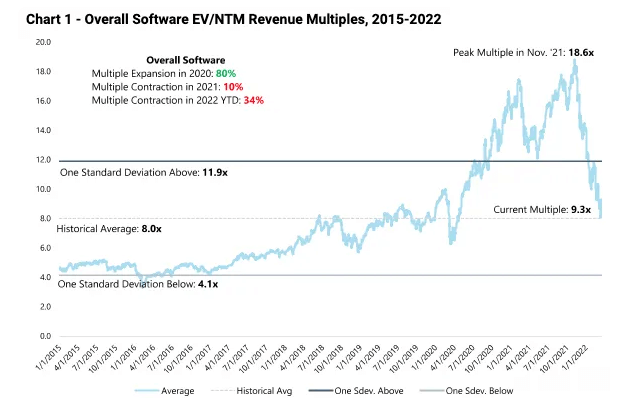 Charts of the day: Evercore ISI’s Julian Emanuel occupies this space alone today with two charts on the U.S. consumer. The first shows how consumer confidence is being rattled by the elevated cost of gas. And the other details how current consumer confidence levels suggest an economic slowdown is potentially on the way. The shaded red areas are periods of recession. 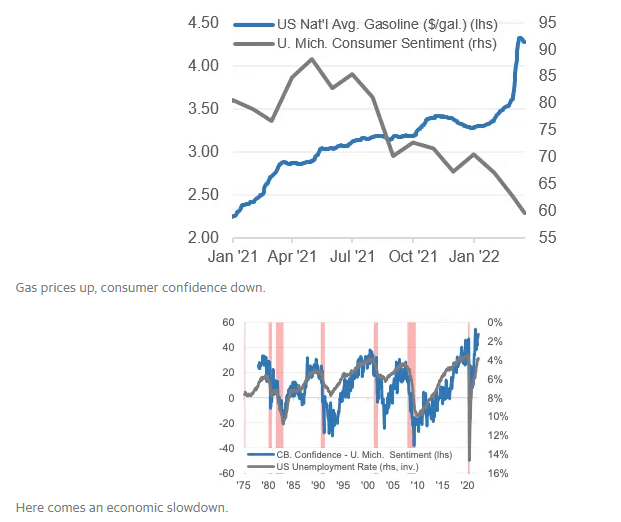 Influencers speak: Former Treasury Secretary Larry Summers has been warning about inflation for some time. “Ultimately we’re going to need 4-5% interest rates, levels they’re not even thinking of as conceivable. They’re recognizing that they’re behind the curve. They’ve still got a long way to go,” Summers told Bloomberg.

SoFi CEO Anthony Noto came out swinging on another potential deferment of student loan payments. “The Biden administration continues to waffle on the issue of federal student loan repayment and possible debt forgiveness,” Noto said in a blog post. Noto tends to be very measured, so this post caught me off guard — but it makes sense as SoFi is heavily involved in student loans.

Recession talk continues. “I’m higher, but I’m not much higher than 20%,” former top Obama administration economist Jason Furman told Insider on the odds for a recession.

And the hunt for Russian yachts continues. “Oligarchs help keep Putin in power, so they need to feel the heat for Putin’s war. That’s why we’re going after their yachts, their condos, and all the places they stash their wealth. And that’s why we’ve got to plug this hole in our bucket of sanctions,” said Senator Elizabeth Warren (D-MA) in a new tweet.

GameStop: Suffice it to say, our analysis of GameStop’s ugly quarter came with an aftermath of absurd tweets from the true believers in the name. Most of their tweets cannot be posted here. But I do want to throw this passionate group another analytical bone to devour. GameStop has 4,573 retail stores around the world. Despite that size, the company only spent $62 million for all of 2021 on capital expenditures (think money spent on new fixtures, lights, rugs, basic upkeep, etc.).