The third quarter was a record time for Tesla (TSLA) , the powerhouse that dominates the electric vehicle market.

The company, whose activities are closely watched because they are an important indicator of the health of the auto sector, announced on Oct. 2 new vehicle delivery and production figures higher than the previous quarter.

Tesla delivered 343,830 vehicles during this period, which ended on Sept. 30, according to a press release. This is an increase of 42.5% compared to the 2021 third quarter, a period during which Tesla delivered 241,300 cars.

If the 343,830 units are a record, it is nevertheless below the 364,660 vehicles anticipated by FactSet analysts.

Indeed, many experts expected the automaker to ramp up the delivery of new vehicles at the end of the quarter after it was held back by various events during the quarter at some of its four plants.

Tesla had, for example, temporarily suspended production in July at its Shanghai site in China to make updates in order to increase its production capacity. In Germany, the group, which opened its European factory near Berlin last March, suffered some setbacks. The group is ramping up in Austin, its fourth factory officially opened since April 7.

“Smoothing out crazy end of quarter delivery wave to reduce expedite costs & relieve stress on Tesla team,” Musk said on Twitter on Oct. 2, after a social media user asked if he could provide some color to the numbers.

He promised that Tesla would now favor a “steadier” delivery rate between quarters. The billionaire added that the end-of-quarter rushes were also at the expense of consumers. 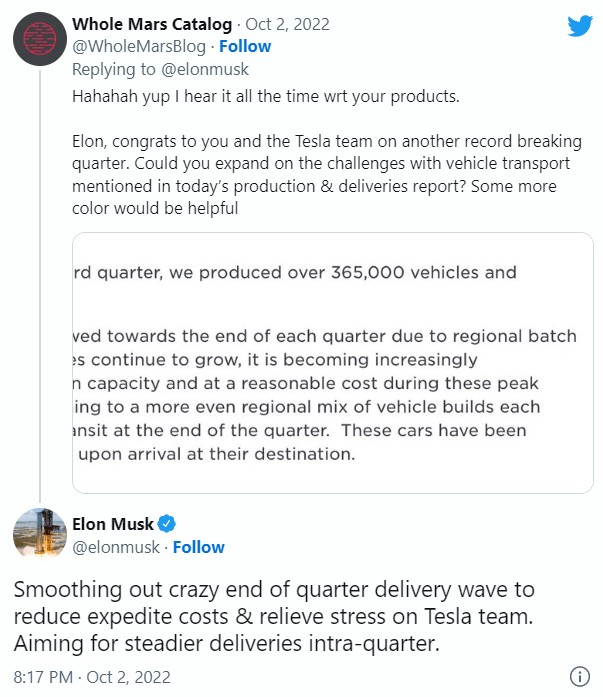 “That makes sense,” the user commented. “The end of quarter delivery wave is bad for the team, bad for customers, and also not cost effective. A more steady mix of deliveries throughout the quarter would be great. I’m sure Berlin and Austin will make that easier as they ramp.”

To which Musk added: “Customer experience suffers when there is an end of quarter rush. Steady as she goes is the right move.” 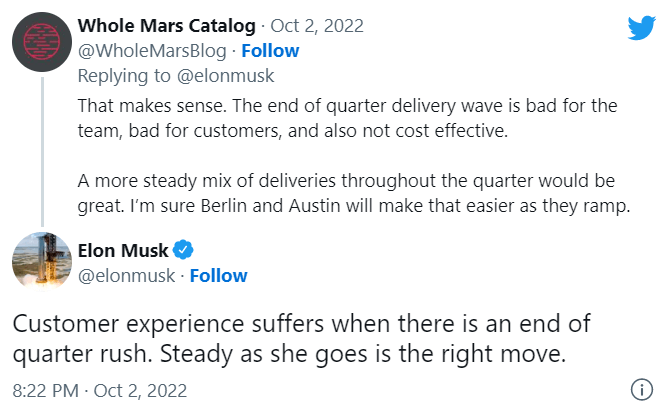 Tesla currently produces and markets four models: the Model S luxury sedan, the Model X luxury SUV/crossover, the Model Y mid-range SUV/Model, and the Model 3 entry-level sedan. Model Y and Model 3 accounted for 94.57% of deliveries in Q3. The vehicle manufacturer does not give additional details of deliveries by region or model.

The Austin, Texas-based group warned on Oct. 2, however, that they had encountered new logistics challenges and have added unexpected costs.

“As our production volumes continue to grow, it is becoming increasingly challenging to secure vehicle transportation capacity and at a reasonable cost during these peak logistics weeks,” Tesla warned.

It added that: “In Q3, we began transitioning to a more even regional mix of vehicle builds each week, which led to an increase in cars in transit at the end of the quarter. These cars have been ordered and will be delivered to customers upon arrival at their destination.”

These additional and unexpected costs fall when the disruptions in supply chains have not completely disappeared. China has still not suspended its zero covid-19 policy, which forces suppliers, for example, to temporarily close factories, causing a shortage of parts.