No Twitter (TWTR) deal for Elon Musk would mean more love and attention for his prized asset Tesla (TSLA) — at least that’s how investors are reading it on Tuesday.

Shares of Tesla popped 4% in pre-market trading as Musk’s deal for Twitter was thrown into fresh doubt after he suggested that the social media site has more fake accounts than the less than 5% that it has disclosed in securities filings.

In an early morning Tweet, Musk said “Yesterday, Twitter’s CEO publicly refused to show proof of <5%,” adding that “this deal cannot move forward until he does.”

Tesla’s stock has dropped 34% since Musk revealed a 9.2% stake in Twitter in early April, likely reflecting investors’ concern that the buyout saga is diverting Musk’s attention from the EV maker’s operations and future.

Since revealing that stake, Musk has behaved in typically erratic fashion. He first disclosed himself as a passive investor before pivoting to become an active one; he initially agreed to be on the board but changed his mind on that front, too. And since reaching a deal to buy Twitter for $44 billion on April 25, the CEO has repeatedly shown signs he’s having second thoughts.

The new tweet from Musk arrives after a tense exchange on the social media platform on Monday. 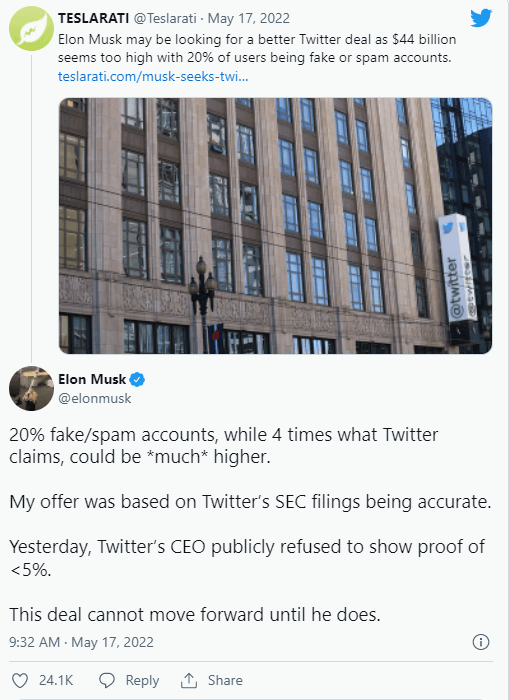 “We suspend over half a million spam accounts every day, usually before any of you even see them on Twitter,” Agrawal said in the 13-tweet thread. “We also lock millions of accounts each week that we suspect may be spam — if they can’t pass human verification challenges (captchas, phone verification, etc).”

Musk responded with a poop emoji.

Musk, the world’s richest person on paper, then followed up 14 minutes later with: “So how do advertisers know what they’re getting for their money? This is fundamental to the financial health of Twitter.”

Amid the uncertainty, Twitter shares have now given back all their gains since Musk disclosed his stake. Twitter shares currently trade at $36.30 based on pre-market levels Tuesday, below the $39.31 closing price hit prior to his stake being revealed.

Wall Street analyst believe the saga is weighing heavily on employee morale at Twitter, and its fundamentals.

“I can’t imagine [being an employee there]; it’s like living in a washing machine right now — you are in the spin cycle,” Jefferies analyst Brent Thill said on Monday. “We have seen senior executives leave. Companies we cover in the tech industry have hired executives out [of Twitter]. I think you are seeing execs check out — they don’t want to be in for the spin cycle. This will only make things worse.”