Tesla strong rally this week points to more gains ahead, according to Wedbush, with the U.S. electric vehicle maker primed to transform the auto industry after ending 2021 on a strong note.

“We’re seeing, it’s a $5 trillion market opportunity in terms of EV and it’s the biggest transformation to the auto industry since the 1950s,” Dan Ives, Wedbush’s senior equity analyst, told on Tuesday.

However, Tesla’s bull case going forward “continues to be expanding supply,” he added. “Based on all of our work in and around Austin, we think starting next week we’re going to get into the early stages of what I believe are cars rolling off the plant,” Ives said.

While there’s been no formal announcement of the Austin factory opening, all eyes are there on Berlin, opportunities some analysts view could expand capacity for the EV manufacturer. Wall Street is expecting an update on the company’s conference call later on this month.

“When you look at Austin in particular, it’s been very smooth in terms of the build out,” Ives said.

“Hiring has been very strong over the last few months, and that’s why Musk has made such a bet on Austin in terms of that being really the golden jewel of the ecosystem,” the analyst added. 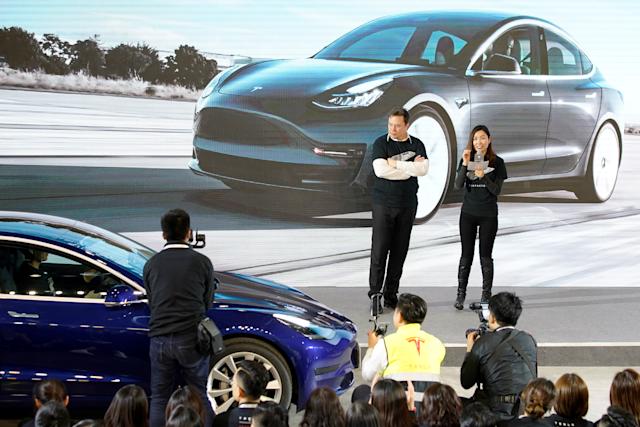 Meanwhile, Tesla’s sales numbers for December in China showed another record month of deliveries. The data confirm that almost half of Tesla’s record year of production and deliveries came from GigaFactory Shanghai.

Tesla sold 70,847 China-made vehicles in December, the highest monthly rate since it started manufacturing in Shanghai in 2019, data from the china passanger Car Association (CPCA) showed on Tuesday. Only 245 units were exported to other markets.

The automaker, which has been able to surmount supply chain woes experienced by rivals to post record quarterly deliveries, has seen a changing tide in China after recent backlash over the company’s showroom in China’s Xinjiang– a region at the center of U.S. genocide allegations.

Like other analysts, Ives believes China remains a growth opportunity for Tesla, expecting China to be “over 40% of deliveries for Tesla in 2022.”

China’s EV market is dominated by domestic brands, including BYD and Wuling – a local marque that’s part of General Motors (GM). According to Shanghai-based consultancy Automobility, Tesla is only the foreign brand in the top 10.

“It’s a tight rope in terms of China,” Ives said. “But if you look at what’s happening right now, the China growth story is actually accelerating for Tesla 2022, and that we believe is worth about 500 hours per share of the story. It’s something we believe is underestimated by the Street.”

Wedbush maintains an “outperform” rating on the stock, with a $1,400 price target and bull price target of $1,800.

And while more competitors jump into the EV space, Ives argued it’s “not a zero sum game” for Tesla.

“Ford’s gonna be successful at GM, Lucid, VW in Europe and of course, NIO in China, but overall in EV land is Tesla’s world,” the analyst explained. “Everyone else is paying rent at this point and that’s what we’re seeing” in the near term, Ives added.