Tesla Has a New Rival on the Rise

The figures are there to show that in the United States, Elon Musk’s company is unrivaled. Its market cap of $763.66 billion at the time of writing is pretty much uncharted waters for automakers.

GM (GM) – Get General Motors Company Report posts a market value of $50.77 billion, while Ford (F) – Get Ford Motor Company Report has a market capitalization of $47.42 billion despite thundering announcements about its ambitions in the electric market.

Newcomers like Rivian (RIVN) – Get Rivian Automotive Inc. Report and Lucid (LCID) – Get Lucid Group Inc. Report with a market cap of $26.06 billion and $32.03 billion, respectively, don’t even appear in Tesla’s rearview mirror.

The gap could widen further as the company opened two new production sites. — a factory near Berlin in Germany and another in Austin — which could enable it to convince even more skeptical or cautious investors.

The Challenger Is from Asia

In addition to investors, the Texan vehicle manufacturer is winning its bet to become the brand to turn to when you want to buy an electric vehicle despite strong competition. This year, most automakers in the US market started producing new models to compete with its Model 3 and Model S sedans and its Model Y and Model X SUVs/crossovers. But so far Tesla is still managing to keep ahead.

However, a rival is emerging and it is not the one we believe. Indeed, this rival is not GM, which has promised to produce over one million electric vehicles per year by 2025. Nor is it Ford and Volkswagen (VLKAF) , which have made Tesla their main target and are in a phase of announcements and production of new models to seduce deep America. Ford is counting in particular on the F-150 Lightning, the version of the legendary F-150 pickup.

This rival does not make a lot of noise and Elon Musk, the whimsical and charismatic CEO of Tesla, himself noticed it. This is the South Korean vehicle manufacturer Hyundai (HYMLF) .

Sawyer Merritt, a Musk fan and Tesla investor, recently shared a screenshot showing the top 5 automakers by market share in the electrical sector in the United States. In this ranking, Tesla is well in first place with 75.8% of the market share, followed by Hyundai with 9%, followed by Volkswagen with 4.6% and Ford 4.5%. The rest of the manufacturers complete the ranking with a combined 6.1%. 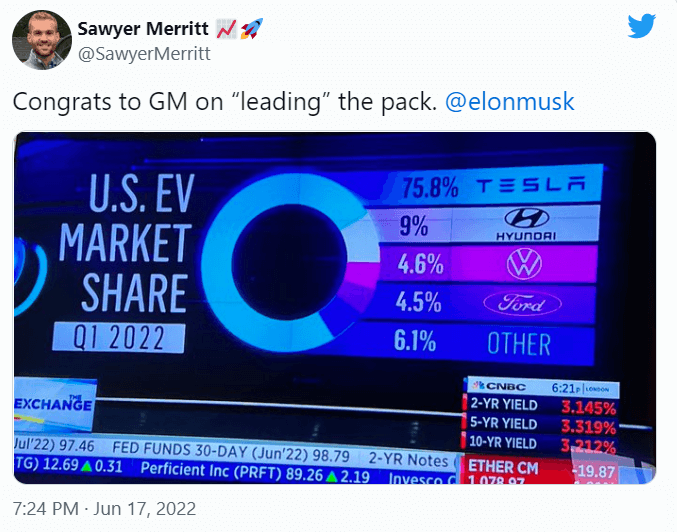 Musk, who is known for rarely uttering the names of Tesla rivals, commented on the post. He seems to have taken note of the progress made by Hyundai. 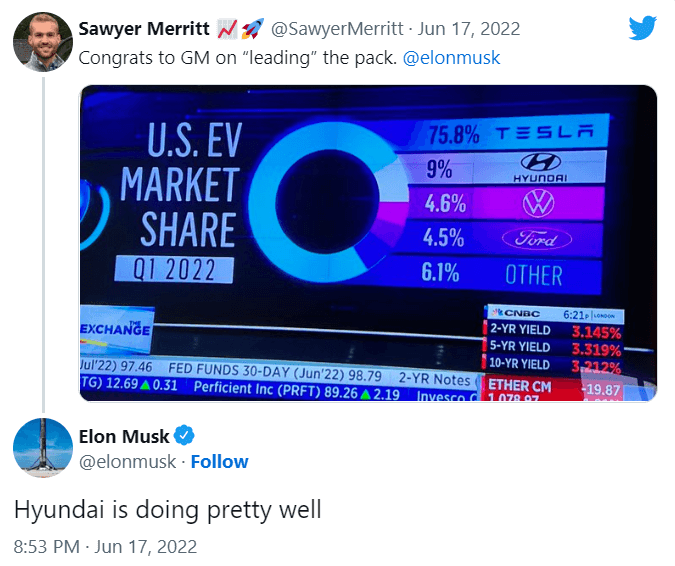 According to Experian, 158,689 EVs were registered in the United States in the first quarter, up 60% year over year. This means EVs now account for 4.6 per cent of the light vehicle market.

The company is followed by Kia Motors, whose majority shareholder is Hyundai with a controlling stake of about 34%, with 8,450 vehicles, or about 5.32% of all electric vehicles registered between January and March in the United States.

Kia notably took advantage of the launch of the EV6 to climb to the top of the rankings.

GM, which had suspended production of the Chevy Bolt and Chevy Bolt EUV because of a battery problem, had only 479 registrations.

Hyundai/Kia owes its success in particular to two models: the Ioniq 5 and the EV6.

It is a rule of the automotive industry: production models always differ quite significantly from the concept car from which they derive. Technical/industrial constraints, standards and cost logic explain it. The Hyundai Ioniq 5 has no use for this rule.

It looks like the vehicle that was sent into production is the concept car: pure lines, no frills and impressive style elements, like its luminous signature coming out of a video game.

Hyundai has opted for retractable flush handles. A long cap implanted behind the wheel covers two large 12.3-inch screens. The first for the instrumentation, the second for the infotainment system. The graphics are clean and modern, and the interface is overall very neat.

The EV6 and the Ioniq 5 are built on the same modular platform designed by Hyundai and Kia, which allow them to incorporate the same motors and batteries. They kind of have similar speed too.