Tesla Announces 3-For-1 Stock Split Date: Is Now The Time To Buy?

Tesla Stock Split: Is Now The Time To Buy?

Tesla (TSLA) shareholders approved plans for a 3-for-1 stock split on Aug. 4. Tesla stock will begin trading at the new split price on Aug. 25 and shares outstanding will increase to 4 billion. The Tesla stock split is seen as a way to increase demand for its shares.

In July, Tesla reported better-than-expected Q2 earnings. Shares soared 10% the next day. They have continued to climb ahead of the anticipated Tesla stock split news. On July 8, Tesla stock climbed above the 50-day moving average for the first time since early May. It’s now trying to get above its 200-day line, but it’s hitting resistance there. The stock is still well below prior highs.

Tesla stock dropped 6.6% in above-average volume the day after Tesla stock split vote. Shares currently are not at a proper buy point. On a daily chart, shares are in a long consolidation with a 1,208.10 buy point, according to MarketSmith chart analysis. A tight trading range around current levels potentially could produce an alternative entry for aggressive traders, but the stock needs more time. 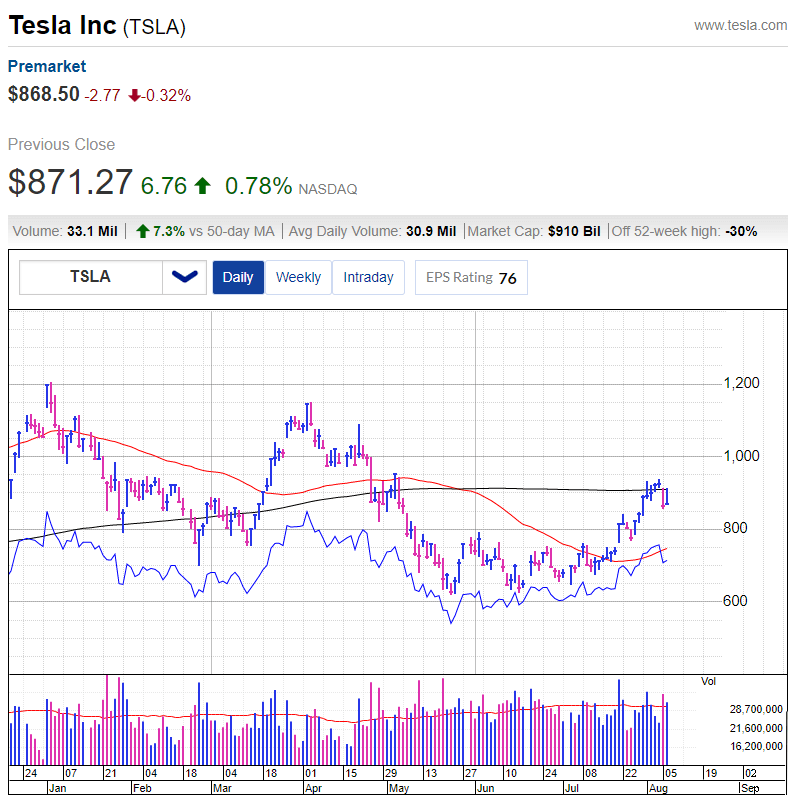 What Is A Stock Split?

A stock split is when a company splits an existing share into multiple new shares. If a company splits 2-for-1, the share price will be cut in half but the amount of shares outstanding will double. Firms usually do stock splits when a share price has increased substantially. The split brings down the price of the stock, which attracts a wider range of buyers. Investors who previously couldn’t afford a share might now be tempted. But a split does not change the current value of the company in any way.

Reverse stock splits can be used to reduce the number of shares outstanding. Companies that are in financial trouble will often announce a reverse stock split to prop up the share price and avoid delisting. So a company trading at $5 per share can initiate a 1-for-2 reverse split, resulting in a $10 share price. If the company had 100 million shares outstanding, that number would drop to 50 million shares.

What Do Stock Splits Do To My Investment?

As an investor, the monetary value of your holdings also will be the same amount after a stock split. You’ll just own more shares.

If you own fractional shares of a company, the same idea applies. If you own half of a share of a company and there’s a 2-for-1 stock split, your holdings would double. So you would own a whole share of that stock.

What if you own a stock that pays dividends? Usually any dividends after a stock split also will be reduced proportionally per share to account for the increase in shares outstanding. This leaves total dividend payments unaffected.

How Do Splits Affect Options?

Let’s say you have a call option on a stock and then a split is announced. What happens next?

If you hold an options contract of a split stock your contract will be recalculated so that it’s not affected by the split. It will show the new price and number of shares, but the overall value will not change. This is known as the process of “being made whole.”

From 2012 to 2021, stocks in the S&P 500 rose roughly 12% on average in the year following their stock splits according to data from Dow Jones. Those same figures showed that rates of stock splitting in the S&P 500 have ticked up in the last few years to their highest levels in nearly a decade.

Excessive stock splitting has been seen at market tops in the past, especially when tech stocks topped in 2000. For example, Qualcomm (QCOM) had a 2-for-1 stock split in May 1999. The company then declared a 4-for-1 stock split in December 1999. QCOM stock skyrocketed more than 840% after the announcement of that first stock split in 1999. Shares surged from an April 1999 price of 21 to hit an all-time high of 200 on the first trading day of 2000.

Many investors view stock splits as bullish. But sometimes a fast series of stock splits may be a warning sign to sell.

Stocks with higher prices tend to attract investors willing to pay for quality. While that might decrease the potential buying audience, it tends to increase the smart-money sponsors that are backing the stock.

However, early stock splits often are not a problem.

Stocks can and often do move higher after initial splits, particularly when they happen early in a bull market. But problems occur when companies enact multiple big splits — say, a 2-for-1 and a 3-for-1 — within a one- to two-year period. Those interested in the Tesla stock split should note that shareholders approved a 5-to-1 split in August 2020.

A stock split can be tempting for investors because it allows them to buy what was a previously more expensive stock at a much cheaper price. But investors should never buy a stock just because of a stock split. Make sure you do your research, check stock charts for the right time to buy, and focus on companies with top fundamentals that are leading price performers in their industry group.