U.S. equity futures ticked lower in post-market trading Monday after a sell-off in the earlier session that saw the Dow Jones Industrial Average fall into correction territory and the Nasdaq enter a bear market. Investors continued to jettison stocks and stockpile safe-haven assets as concerns over the economic consequences of Russia’s war in Ukraine intensified.

Futures tied to Wall Street’s main benchmarks dipped slightly heading into overnight trading. Contracts on the Dow, S&P 500 and Nasdaq were each down about 0.3% Monday evening.

Energy prices spiked over the weekend and into Monday amid talks Western nations may add an import ban on Russian crude oil to their growing list of financial penalties against Moscow. Reuters reported the U.S. may follow through on an embargo without the participation of allies in Europe after President Joe Biden held a conference call with the leaders of France, Germany and the United Kingdom Monday seeking their support for a Russian oil ban.

Russian energy products comprise only 7.9% of total petroleum imports, including crude oil, in the U.S., but European countries rely more heavily on Russian crude oil and natural gas for energy.

WTI crude oil futures marked their most volatile day of 2022 on Monday — oscillating nearly 13%, while Brent crude oil futures hit $137 per barrel, the highest price since July 2008. Meanwhile, gold futures rallied past $2,000 per ounce for the first time in 18 months. 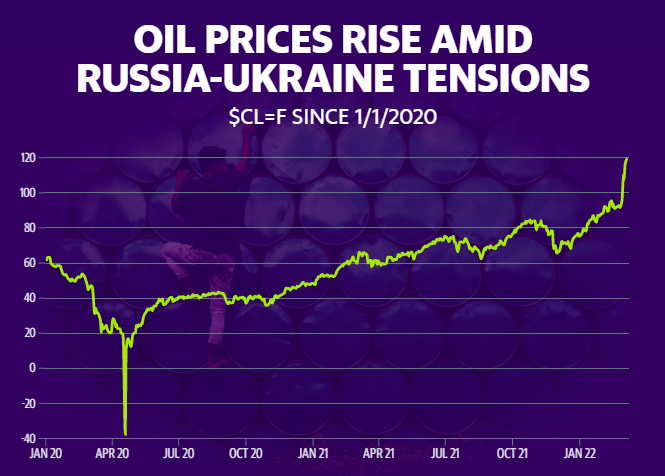 “What we’re seeing is the reminder that volatility is a feature of financial markets,” Brown Brothers Harriman chief investment strategist Scott Clemons told. “I would be very nervous about energy, not only because of how it’s done, but as a reminder, geopolitical unrest like this can lead to a spike in oil prices — and they can be quite scary — but they can also resolve rather quickly.”

“We’re seeing a lot of energy companies that have run away far on the upside anticipating not just elevated prices of the underlying commodity but extended elevated prices,” Clemons said. “That is certainly a possible outcome if this prolongs and disruptions continue, but oil can go right back down as quickly as it went up if there is a quicker resolution to these unrests in Ukraine than markets currently anticipate.”

The exacerbating crisis in Ukraine has raised worries a dent in global trade flows and further supply chain disruptions could push inflation even higher. The Bureau of Labor Statistics’ latest CPI print due out Thursday could show an annual jump of as much as 7.9%, according to consensus economist estimates.

The geopolitical turmoil is expected to derail the Federal Reserve from an aggressive first bump in interest rates — investors had previously considered the likelihood of a 50 basis point rate hike — with Fed Chair Jerome Powell signaling a potential move of 0.25% at the Fed’s policy meeting on March 15 and 16 in congressional testimony last week.

“Of course, a policy mistake is possible, but we believe the Fed will manage interest rate adjustments with the economic impacts of the war in Ukraine,” Comerica Wealth Management Chief Investment Officer John Lynch said in a note. “Fed Chair Jerome Powell appears poised to tackle inflation and is prepared to take the steps necessary to support consumers from surging energy prices.”