Snap (SNAP) is getting hammered. Shares of the social media/camera company, which were trading as high as $83.11 in September 2021, have since plunged amid rising inflation, the war in Ukraine, and Apple’s privacy changes.

Shares of Snap collapsed a stunning 74.5% year-to-date as of Monday, falling to $12 ahead of the close of markets in New York.

Snap suggested the pain could continue, warning in a Securities and Exchange Commission filing last month that it will likely fall short of its Q2 guidance when it reports its current quarter earnings.

Snap — which has 332 million daily active users — is far smaller than rivals Instagram, which continues to ape the ephemeral messaging app’s myriad features, and TikTok, which already has more than 1 billion users. While shares of ad-reliant tech companies are plummeting across the board, Snap seems to be taking the most brutal beating. 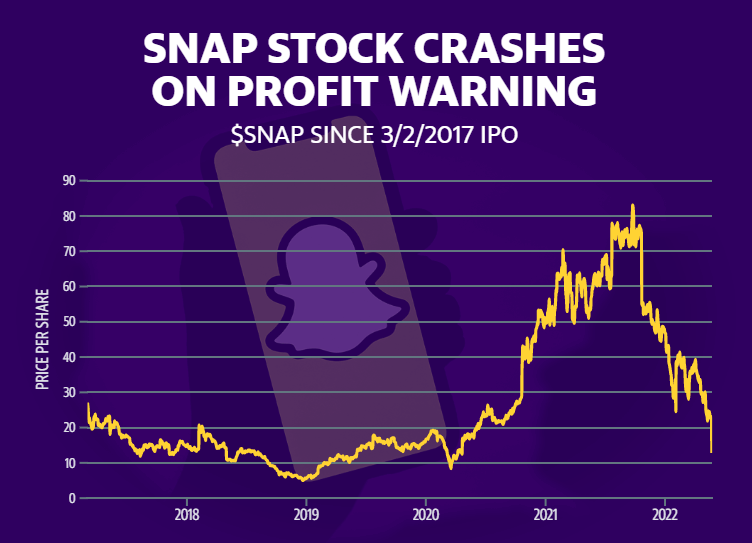 Google (GOOG, GOOGL) is also getting smacked, but its shares have dropped just 22.9% year-to-date, falling below the broader S&P 500, but still faring better than Snap. Heck, even Facebook and Instagram parent Meta (META) — down an incredible 47.8% year-to-date — is beating out Snap.

That’s not to say that Snap isn’t doing well on a fundamental level. In its Q1 2022 earnings report, Snap notched an 18% year-over-year increase in daily active users (DAUs) and a 38% year-over-year jump in revenue to $1.06 billion.

Still, that kind of growth was slower than its Q1 2021 performance, when Snap saw DAUs grow by 22% year-over-year and revenue skyrocket by 66%.

CEO Evan Spiegel acknowledged the slow-down in Q1 2022, praising the company for continuing to grow despite a challenging macro environment.

Snap is facing the same headwinds as other industry players including the war in Ukraine, inflation, the specter of rising interest rates, and Apple’s iOS privacy changes.

Called App Tracking Transparency, or ATT, that change from Apple allows users to opt out of letting apps track their movement across different apps and websites. By preventing apps from tracking users across the web, ATT makes it harder to target users with specific ads. As a result, advertisers no longer have a clear understanding of who sees their ads and how effective their campaigns are.

While Snap CBO Jeremi Gorman told investors during the company’s Q1 earnings call that it is working to improve ad targeting, the process will take time. For their part, Snap investors might flee sooner rather than later.