Shopify: Deliverr Acquisition Would Be a Good Move, Says Analyst

According to a source in the know, Shopify (SHOP) intends to acquire Deliverr, a privately held company which offers a fulfillment solution for e-commerce businesses. The purchase is expected to cost around $2.5 billion and could be concluded over the next couple of weeks.

And the analyst thinks it will make a fine addition to Shopify, providing it with an “immediate shot in the arm.”

“Since its founding in 2017, Deliverr has successfully scaled its asset-light fulfillment solution to over 80 warehouses, and has integrations built for many of the major marketplaces and e-commerce platforms,” explained the analyst. “The acquisition would provide SFN with immediate access to over 80 partner-operated warehouses, as well as critical and proven fulfillment software.”

Additionally, with Deliverr’s employees and management team in tow, Shopfiy stands to benefit from “valuable fulfillment experience.” By pairing its planned first-party fulfillment centers with Deliverr’s, Shopify will be able to create a hybrid model that would enable it to exert “control over fulfillment capacity.”

Between early 2020 and late 2021, the number of warehouses on Deliverr’s network rose from 30 to 80, an increase of more than 160%. Working on the assumption that by the end of 2024 capacity on the Deliverr network could “at least double,” Pfau thinks Shopify could gain first-party and partner capacity to fulfill more than 10% of U.S. GMV. “We view this as a meaningful percentage,” explained the analyst, “as we believe it is unlikely that even when at scale over 50% of Shopify’s U.S. GMV would be fulfilled through SFN.”

Accordingly, Pfau reiterated an Outperform (i.e., Buy) rating on SHOP stock. The analyst has no fixed price target in mind.

The rest of the Street does have a price target and it is a bullish one; at $986.6, the figure suggests shares will appreciate by 114% in the year ahead. The ratings, however, paint a less conclusive picture; based on 15 Buys vs. 14 Holds, the analyst consensus rates this stock a Moderate Buy. 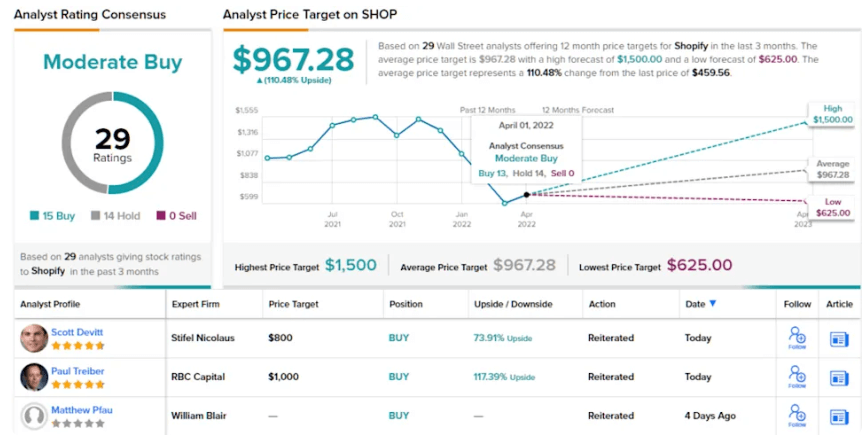