Ocean shipping rates on major trade routes have fallen by more than half since the beginning of this year, a potential sign of easing inflation pressures and alleviated supply chain logjams.

Data from Freightos shows the cost to ship a 40-feet container from China to the U.S. West Coast is around $4,300, down almost 72% from mid-January.

In comparison, a container shipped from Asia to Europe costs around $7,800, 40% less than at the start of the year. The rate for both key routes still remains elevated from pre-pandemic levels.

“The unprecedented pandemic-led boom in freight rates has peaked,” Jonathan Roach, a container shipping analyst at London-based Braemar, wrote in a report this week. 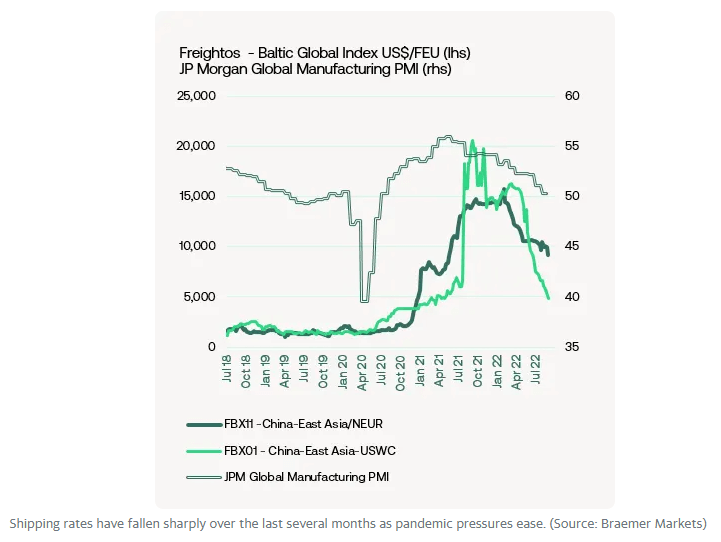 “We’re not expecting rates to surge next year. They’re going to probably fall down towards pre-pandemic levels, maybe slightly higher for the additional levies [that] will be charged for cleaner shipping,” told Roach.

Roach said new ships will be deployed over the next two years, as shipping groups have “invested heavily” in container fleet growth after profits soared in recent years.

Freight rates from China to the U.S and Europe both rose north of $20,000 last September due to supply-chain disruptions, port backlogs, and a surge in cargo. Over the past two years, shippers have shifted cargo to the ports in the Atlantic and Gulf of Mexico in hopes of avoiding congestion that clogged West Coast ports. The port of New York and New Jersey said it has seen rise of 34 percent in cargo volume compared to pre-pandemic levels.

As shippers diverted freight to eastern ports, congestion moved along with it. Data from Flexport shows that vessels remain at anchor in New York, Savannah, Georgia, Houston, Texas, for more than a week. 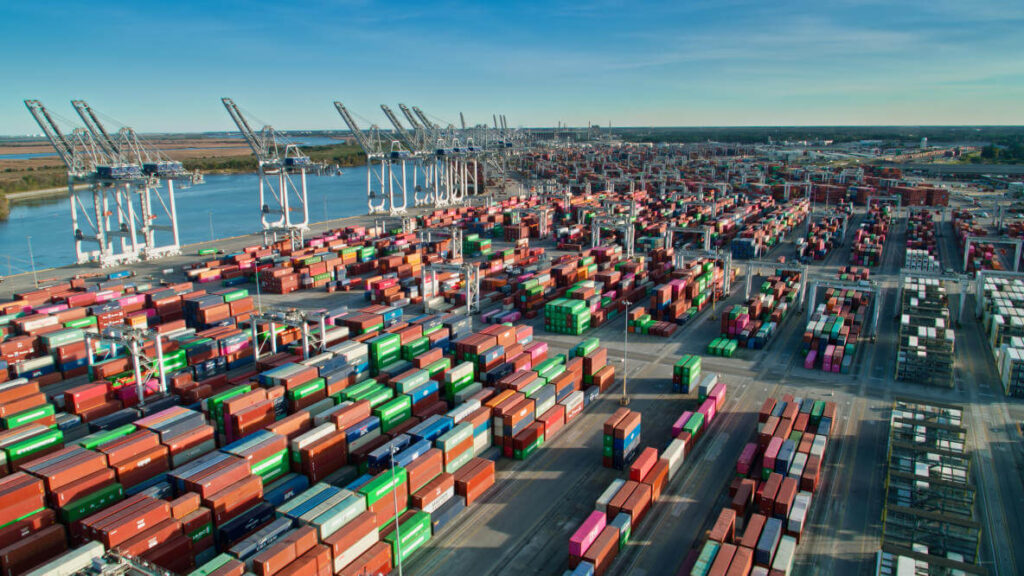 And industry analysts and shipping companies predict shipping rates will continue to drop for the rest of the year and into 2023.

Some large importers like Walmart decided to take matters into their own hands over the last couple years, even chartering their own vessels instead of waiting for ocean carriers to have space in order to keep shelves stocked. Now, Walmart and other retailers are faced with bloated stockrooms and consumers pulling back from a two-year spending spree as inflation bites.

Deutsche Bank’s Amit Mehrotra sent a note to clients back in August about the “sonic boom” of high inventories, writing: “Whether it’s the wrong inventory or a pull forward of peak season… it still represents [shelves] that don’t need to be restocked.”

“The main driver [of lower prices] is a decrease in demand for ocean freight and what’s driving the decrease in ocean freight is probably a number of things,” told Judah Levine, head of research at Freightos. “The number one thing might be inflation… people are spending less on more discretionary things.”

“This really isn’t peak season. This is kind of a non-peak season because everybody shipped beforehand,” Levine added.

In a speech this week, Federal Reserve Vice Chair Lael Brainard highlighted elevated inventory levels and profit margins from the boom in spending last year as potential positives in the central bank’s fight to bring down inflation.

“Reductions in markups could also make an important contribution to reduced pricing pressures,” Brainard said. “Last year’s rapid demand growth in the face of supply constraints led to product shortages in some areas of the economy and high margins for many firms.”