Prediction: 3 Growth Stocks That Could Be Worth $1 Trillion by 2030

A down market can be the best time to find new opportunities and put money to work.

In the hit movie The Social Network, which recounts the founding story of Meta Platforms’ (META -9.37%) Facebook, a key character tells a young Mark Zuckerberg that his company is headed for a billion-dollar valuation. Suddenly, earning a million dollars feels like a stale achievement for the start-up.

Back in 2004 (when the movie is set), that was a wild thought — especially since the tech bubble had burst just a few years earlier. But a lot has changed since then and now there are four U.S. companies with market valuations exceeding $1 trillion, and a few more with clear potential to join them.

Let’s take a closer look at three stocks with real potential to be trillion-dollar companies by 2030, delivering strong gains for investors along the way (spoiler alert: Zuckerberg’s Meta Platforms is one of them).

Tesla (TSLA -4.04%) is no stranger to the $1 trillion valuation. The electric vehicle powerhouse temporarily crossed the threshold more than once in the second half of 2021, though the broader sell-off in the technology sector since then helped pull its stock back down into the billions. The company is currently valued at around $952 billion. 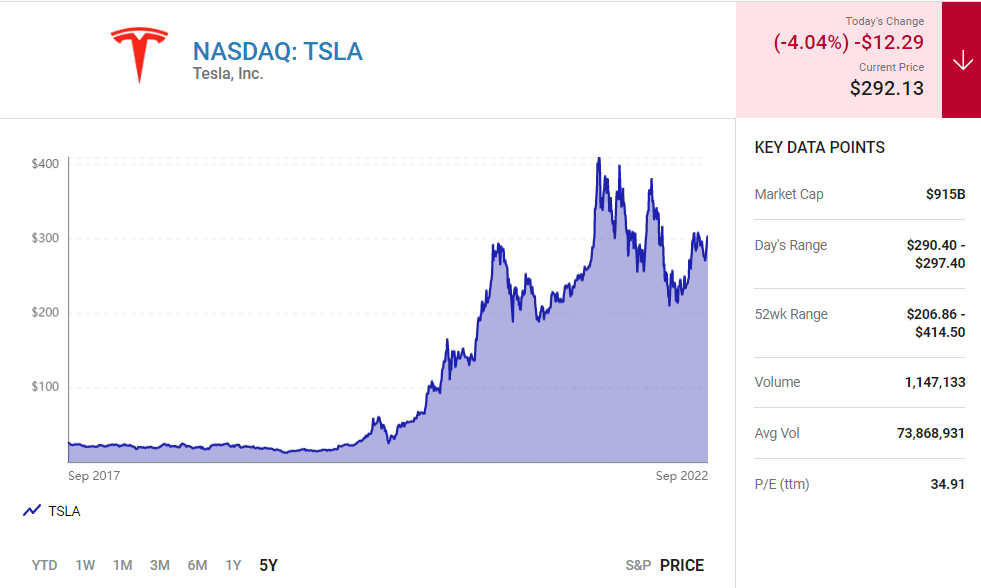 Tesla as a company amassed incredible momentum as a manufacturer of electric vehicles (EVs). It’s a global leader in EVs and recently doubled its production capacity to 2 million cars annually as new factories in Austin and Berlin came online. 2022 is a transition year as those facilities ramp up, but analysts predict they could drive Tesla’s annual revenue to $120.6 billion in 2023, more than double the $53.8 billion it generated in 2021.

By 2030, Tesla’s CEO Elon Musk said he’d like to see Tesla producing 20 million EVs annually, with 10 to 12 additional gigafactories coming online between now and then. Plus, its robotaxi business is slated to come online in 2024, which could reshape the mobility industry using Tesla’s fully autonomous self-driving technology. That alone could be a $2.1 trillion opportunity by 2030, according to one estimate.

Tesla is already a profitable company with the highest gross margin in the automotive industry, meaning it’s likely to have access to all the capital it needs to continue rapidly expanding. If the company truly does grow its production capacity tenfold by 2030, its market valuation will likely breeze well past $1 trillion.

Like Tesla, Meta Platforms also briefly exceeded $1 trillion in valuation in 2021. That market valuation plunged more than 56% on a few troublesome quarterly reports and some generally tough stock market conditions. All is not lost, but its next trip to the trillion-dollar club will likely be built on its efforts to build out the metaverse. 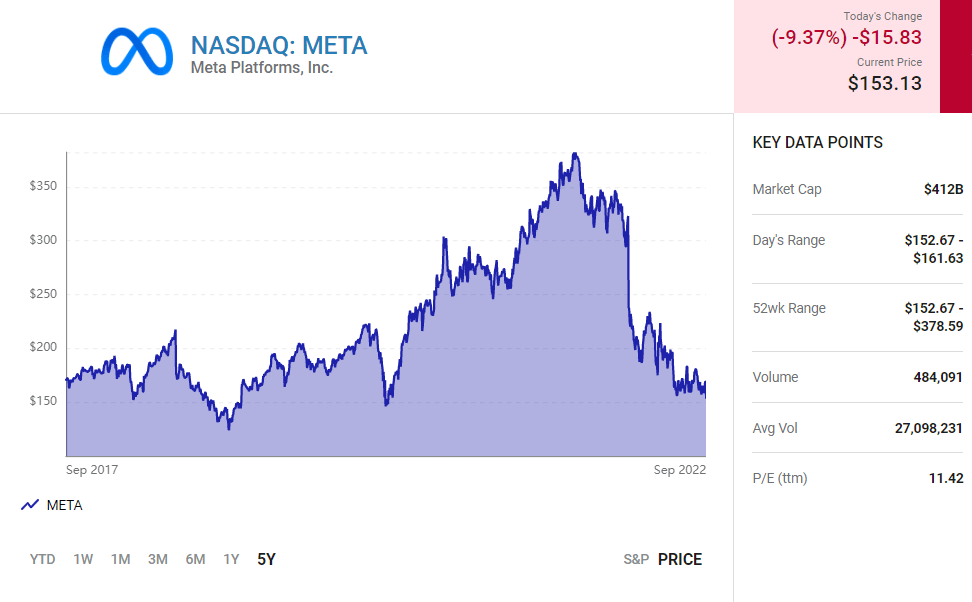 Meta is the parent company of Facebook, Instagram, and WhatsApp, a trio of social networking platforms that cater to more than 3.6 billion monthly users. The company faced some growth challenges recently related to Meta’s user base, which grew to the point where it is getting harder to grow much more.

Meta is focusing more on new ways to generate revenue and less on user acquisition. The metaverse might hold the key here. CEO Zuckerberg estimates Meta’s initial iteration of the metaverse could attract 1 billion users, each with the potential to spend hundreds of dollars on digital goods and services. The company bet heavily that this concept will be the future of social and professional networking, spending over $15 billion on the project so far to get it up and running.

If it succeeds, Meta could tap into as much as $30 trillion in potential value over the next decade. At the moment, Meta’s stock trades at a price-to-earnings ratio of just 14, well below the Nasdaq-100 tech index’s ratio of 25.3. If Meta stock simply rose enough to trade in line with the rest of the technology sector, its market valuation would reach $817 billion, so it’d be knocking on the door of the $1 trillion mark even before the metaverse is fully up and running.

Nvidia (NVDA -9.47%) has more opportunities to generate $1 trillion in valuation than just about any other company. Its primary operations revolve around the semiconductor industry, which is expected to grow to $1.5 trillion in annual value by 2030. And it’s also developing new revenue streams that take on both Tesla (it has built its own autonomous self-driving technology) and Meta (it has an advanced 3D rendering tool, called Omniverse, used to develop virtual worlds). 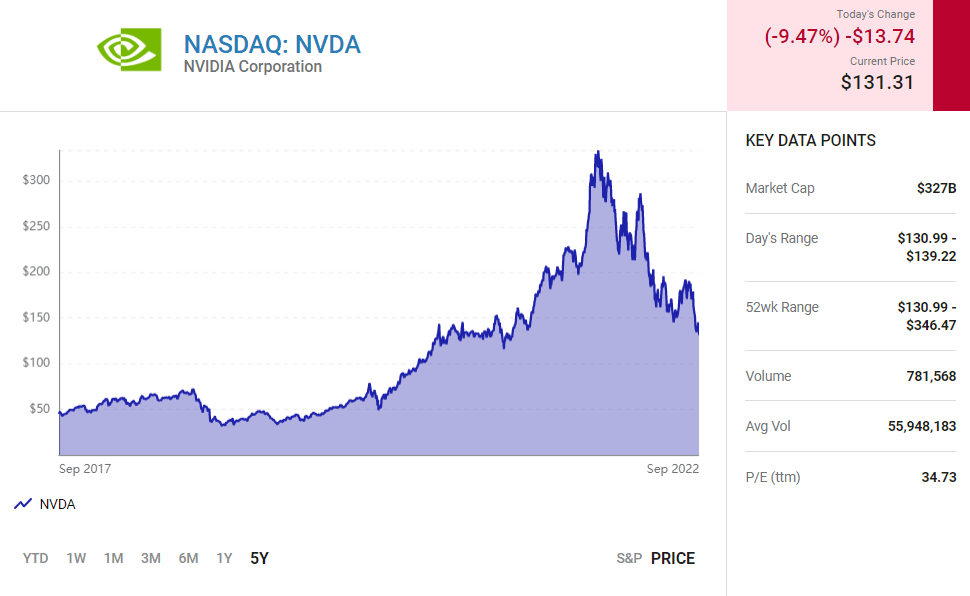 Semiconductors are the advanced computer chips used to power everything from consumer electronics to the data centers that facilitate cloud computing technology. Nvidia is a global leader in the space, with chip sales accounting for about 87% of its $6.7 billion in total revenue during the second quarter of fiscal 2023 (ended July 31). Its artificial intelligence chips have turned the data center from a place to store information to a hive of machine learning, producing valuable insights for customers.

But Nvidia is currently transitioning from solely a hardware maker to a platform computing company, and its smaller segments might be its most exciting.

Its automotive business unit is home to Nvidia Drive, an end-to-end autonomous solution for car makers wanting to develop vehicles with self-driving capabilities. Nvidia has already signed up more than 35 manufacturers and built a sales pipeline of $11 billion, but it has the potential to turn this into a multitrillion-dollar opportunity by 2030. Mercedes-Benz, one of the early adopters, will roll out new cars with Drive autonomous technology from 2024.

Nvidia is valued at just $358 billion today, meaning it has a longer road to a $1 trillion valuation than either Tesla or Meta, but that doesn’t mean it’s less likely to get there given its game-changing technology.