The pound slumped to its lowest level of 2021 against the dollar (GBPUSD=X) on Thursday as the prospect of the US Federal Reserve tightening policy faster than expected boosted the greenback.

Sterling touched lows of $1.3304, its lowest since December 2020, as the US central bank hinted at wrapping up its stimulus programme and raising interest rates earlier than anticipated to counteract rising inflation.

Uncertainty over when the Bank of England (BoE) might raise interest rates is also weighing on the pound.

On Wednesday night, the minutes of the Fed’s most recent meeting pointed to some policymakers wanting a faster taper than the current $10bn (£7.5bn) in US treasuries and $5bn in mortgage-backed securities.

Instead they are looking to move towards ending its bond-buying scheme sooner as inflation in the US hit a 30-year high of 6.2% last month. It also comes as the labour market is tighter than at any point since the financial crisis.

“Various participants noted that the (policy-setting) committee should be prepared to adjust the pace of asset purchases and raise the target range for the federal funds rate sooner than participants currently anticipated if inflation continued to run higher than levels consistent with the committee’s objectives,” it said.

“Participants noted that the committee would not hesitate to take appropriate actions to address inflation pressures that posed risks to its longer-run price stability and employment objectives.” 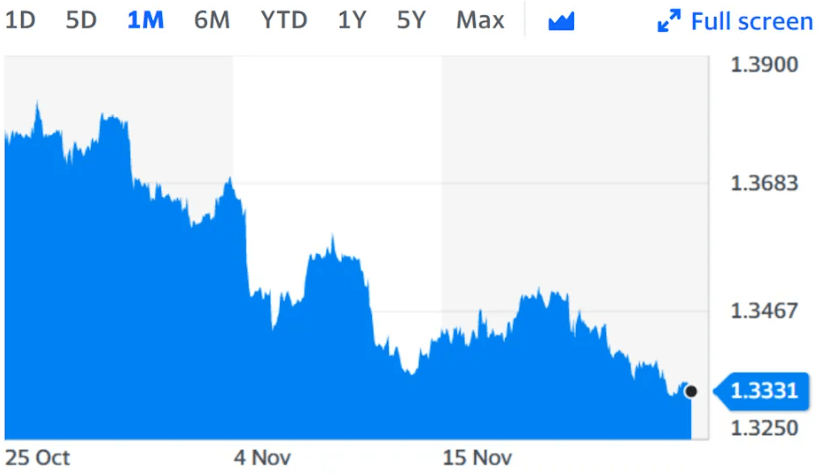 Meanwhile, the euro also weakened on the back of the news, trading at its lowest level against the dollar (EURUSD=X) since July last year. It was also near a 21-month low against the pound (EURGBP=X).

The US dollar index is currently hovering around its highest level since July 2020, and also pushed to its best level against the Japanese yen in nearly five years. It has now risen by more than 6% since its low in late May, just six months ago.

Michael Hewson of CMC Markets said: “We already know the likes of James Bullard of the St Louis Fed and Raphael Bostic of the Atlanta Fed are some of the more hawkish voices on the Federal Open Market Committee (FOMC), and they now appear to be being joined by some previously dovish voices.”

“This shift is already being vocalised by the likes of Mary Daly of the San Francisco Fed who said she was open to accelerating the pace of the taper program in comments made yesterday.”

“She has in the past tended to lean towards the dovish side in recent commentary, so this shift is particularly notable, and suggests the calculus is shifting on the FOMC.”