Petroleo Brasileiro SA or Petrobras PBR ended deal talks with Ultrapar Participações SA over the divestment of its Alberto Pasqualini (“REFAP”) refinery in Rio Grande do Sul and associated assets as part of its extensive divestiture program.

In January, the company announced that Ultrapar was leading the talks to obtain the refinery, which has a processing capacity of 208,000 barrels per day (bpd). Despite several efforts, the companies failed to meet certain conditions to complete the refinery’s sale and purchase process. Notably, there would be no penalties for either party and Petrobras would relaunch the refinery sale process in the future.

This is the third refinery sale process that failed after Petrobras offered eight refineries for sale as part of its downstream divestiture program. REFAP joins the company’s Presidente Getulio Vargas (“REPAR”) and the Abreu e Lima refineries, the sales of which were both put off after failing to attract sufficient bids. The three refineries constitute nearly 50% of the 1.1 million-bpd of domestic refining capacity.

Petrobras sold just two of the eight refineries in its planned divestitures program. The company suspended the sale of the REPAR refinery, which was included in its divestiture program, as offers were too low. The divestment plan was hampered by the falling domestic fuel prices and the company incurred significant downstream losses from government-capped prices through 2014.

Petrobras confirmed that the sales processes remain in progress and negotiations are ongoing for other refining assets, including the REGAP, LUBNOR and SIX refineries. The divestments would enable Petrobras to raise additional money and reduce debt.

Petrobras is the largest integrated energy firm in Brazil and one of the biggest firms in Latin America. Its activities include exploration, exploitation, and the production of oil from reservoir wells, shale and other rocks. It comprises refining, processing, trading and transportation of oil and oil products, natural gas, and other fluid hydrocarbons beside other energy-related operations.

Shares of the company have outperformed the industry in the past six months. Its stock has gained 28.5% against the industry’s 7.2% decline. 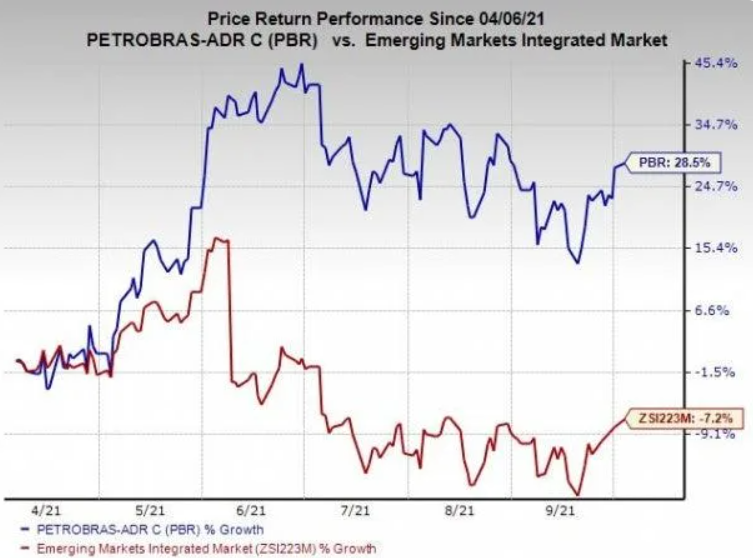 In the past 60 days, the Zacks Consensus Estimate for Whiting Petroleum’s 2021 earnings has been raised by 15.1%.