Patents reveal what Apple Car could finally look like

The Apple Car could have Siri integration, a customisable driver dashboard, and “adaptive doors”, according to visualisations based off patents the iPhone giant has submitted.

Car leasing company Vanarama used aesthetics from existing Apple hardware – the iPhone and the MacBook – with ideas the company has already filed. While patents do not guarantee that a feature will be included in the vehicle, they are a clear indication of the types of technology that a company is researching.

The most notable Apple idea Vanarama spotted was patent EP2581248B1, which details how the traditional car dashboard could be completely changed.

The position of controls – heating, music, and driver information – could be able to customised based on driver preference. Vanarama envisage this on an enormous screen that stretches from the passenger door to the driver door. 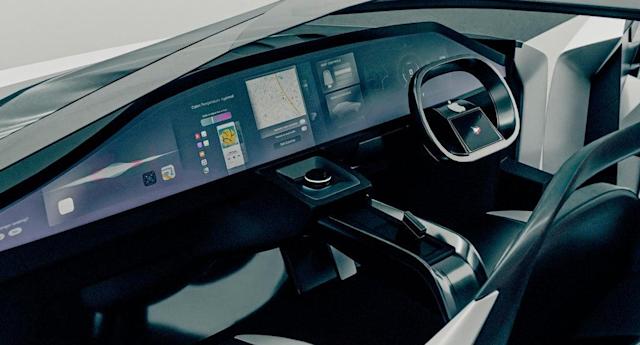 Other patents suggest that Siri would be heavily integrated – with a specific car version that would monitor the road and cabin conditions – and Apple has also registered a “pillarless structure” that would not have any clear boundaries and “adaptive doors” with scooped windows that increase headroom when getting in and out of the vechicle.

On the outside, Vanarama have given the Apple Car retractable door handles that resemble the iPhone side buttons and the frosted white finish from the iPhone 4.

The position of controls can be fully customised depending on driver preference, with an almost infinite number of combinations.