November jobs report: What to know this week?

As investors return from the Thanksgiving-shortened trading week, focus will shift to the U.S. labor market.

The Labor Department’s monthly jobs report due for release on Friday is set to provide an updated snapshot of the strength in hiring and labor force participation in the U.S. economy. Consensus economists are looking for a half-million jobs to have returned in November, with the pace of hiring slowing only slightly from October’s 531,000 gain. The unemployment rate is also expected to improve further to 4.5% from October’s 4.6%, reaching the lowest level since March 2020.

“We expect non-farm payrolls to have risen by 500,000 in November, but the growing risk of a winter COVID wave and a dwindling supply of available workers will weigh on jobs growth soon,” wrote Paul Ashworth, chief North America economist for Capital Economics, in a note last week.

“Employment growth can’t continue at this pace for much longer unless the labor force stages a more notable recovery. If anything, labor supply could worsen over the coming months as the federal vaccine mandate covering 100 [million] workers begins on January 4,” Ashworth added. “That suggests wage growth will remain strong, and we expect a 0.4% [month-over-month] rise in average hourly earnings in October.”

On a year-over-year basis, average hourly earnings are expected to rise by 5.0%, accelerating even further after October’s already marked 4.9% rise and representing the fastest wage growth rate since February.

Growing average wages and a tight labor market — while a positive for consumers and their ability to spend — has also stoked concerns over persistent inflation. Last week’s Personal Consumption Expenditures (PCE) deflator from the Bureau of Economic Analysis for October showed an annual jump of 5.0% in the index, or the biggest rise since 1990. And the core PCE, or the Fed’s preferred inflation gauge stripping out volatile food and energy prices, rose by 4.1% year-over-year — the most in three decades.

Other recent data have homed in on the tight labor market and presaged a potentially strong November jobs report. Last week’s initial jobless claims fell to a 52-year low of 199,000, taking out both the prior pandemic-era low and pre-pandemic average for new first-time filings. This served as yet another point underscoring the steep competition for labor among U.S. employers, with companies attempting to hire and retain their existing workforces amid widespread labor shortages.

Even given these lingering scarcities, the labor force participation rate has yet to return to pre-pandemic levels. The civilian labor force was still down by nearly 3 million participants compared to February 2020, with lingering concerns over the virus and a desire by many working-age individuals to seek out new roles with better flexibility and benefits still keeping many individuals on the sidelines of the workforce. Consensus economists expect the labor force participation rate to tick up only slightly in November to reach 61.7%, growing from October’s 61.6% but coming in well below the 63.3% rate from February 2020. 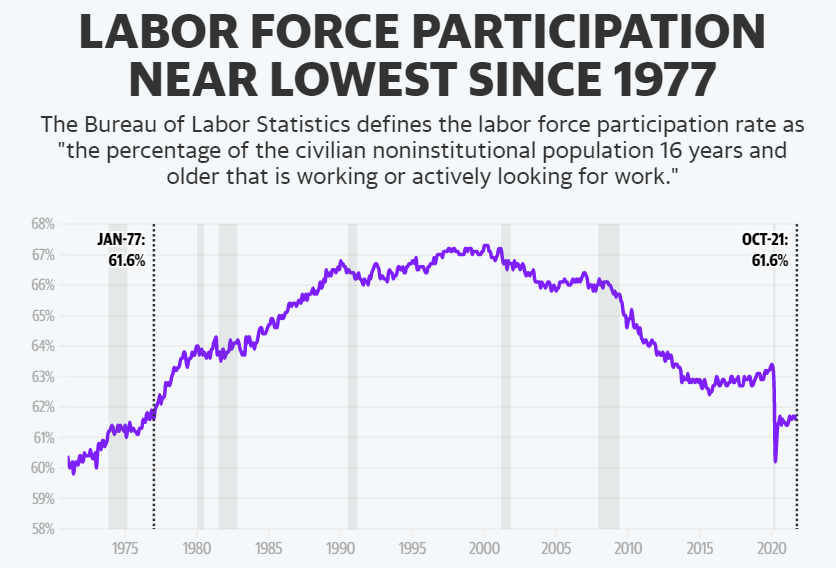 Returning the economy back to pre-pandemic labor force participation levels and ensuring job gains are seen equitably across different groups has become a key focus for the Federal Reserve. And the distance still left to make up on these fronts has also been the biggest factor keeping the Fed ultra-accommodative with its monetary policy support, even after a parade of hotter-than-expected inflation reports that would appear to warrant a more hawkish policy tilt and a quicker-than-expected hike to interest rates. Fed Chair Jerome Powell’s renomination to remain as head of the central bank further suggests the Fed’s focus on the labor market as a critical informing factor for monetary policy will remain.

“Market views for future Fed rate increases have been pulled forward aggressively in response to evidence that elevated inflation pressures are likely to persist for longer,” wrote Deutsche Bank economist Justin Weidner in a note last week. “However, as Chair Powell’s November press conference made evident, prospects for the labor market to return to maximum employment remain a critical consideration for when the Fed will eventually begin to actively tighten monetary policy.”