Nasdaq Bear Market: 3 Remarkable Growth Stocks Down Over 90% That Can Double Your Money by 2025

These beaten-down innovators have industry-changing potential.

Since the beginning of 1950, the benchmark S&P 500 has endured 39 separate double-digit percentage declines. Investors might not enjoy the fact that stocks can go down, but it happens more often than you might realize.

It’s been an especially difficult year for the growth-focused Nasdaq Composite (^IXIC). The index that’s largely been responsible for lifting the broader market to new heights has plunged as much as 38% from its November 2021 all-time high. That firmly entrenches the Nasdaq in a bear market.

On the bright side, history has repeatedly shown that buying the market’s big drops is a smart move. Innovative businesses that offer industry-changing potential can deliver big gains when the next bull market inevitably arrives.

What follows are three remarkable growth stocks beaten down more than 90% from their respective all-time highs that can double your money by 2025.

The first phenomenal growth stock that has the tools and intangibles necessary to generate triple-digit returns for investors over the next three years is telemedicine giant Teladoc Health (TDOC -3.09%).

Since peaking in February 2021, Teladoc’s shares have plunged by 91%. Though valuation has certainly played a role, Teladoc has primarily been pummeled after grossly overpaying for applied health signals company Livongo Health. The $18.5 billion deal has largely been written down, which is why Teladoc’s year-to-date net loss is so unsightly. 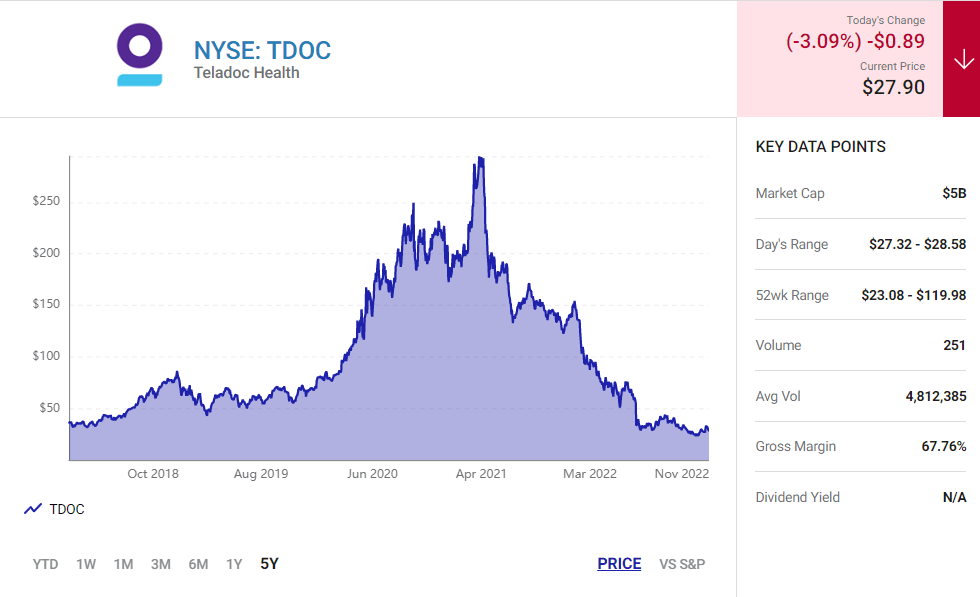 But there does appear to be light at the end of the tunnel for what’s been a nightmare for shareholders. The bulk of one-time expenses tied to the Livongo deal have been written down, which should clear a path to a much cleaner income statements from Teladoc moving forward.

More importantly, Teladoc has macro and company-specific factors working in its favor. In terms of the former, we don’t get to control when we get sick or what ailment(s) we might develop. There will always be demand for virtual visit services, no matter how well or poorly the U.S. economy or stock market is performing.

On a company-specific basis, Teladoc Health is completely changing how care is administered. Skeptics might refer to telemedicine as a fad that was aided by the COVID-19 pandemic. However, Teladoc was growing sales by an average of 74% per year in the six years leading up the pandemic.

With losses expected to narrow in 2023, don’t be surprised if Teladoc Health bounces back in a big way and ultimately doubles by 2025. 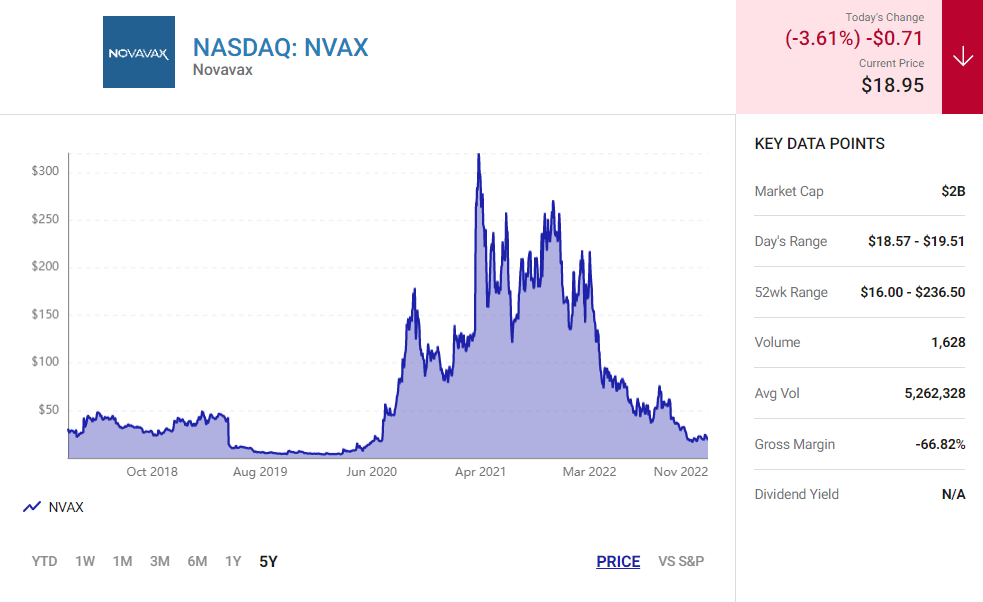 A second remarkable growth stock that’s been beaten to a pulp by the Nasdaq bear market, but is poised to rebound, is biotech stock Novavax (NVAX -3.61%). Shares of the company have plunged 94% since peaking in February 2021.

Novavax was one of a handful of drugmakers that soared because of the COVID-19 pandemic. Unfortunately for Novavax, its emergency-use authorization filing was delayed on multiple occasions in the U.S., and the company struggled to ramp up production of its vaccine. In short, it missed an opportunity to grab potentially billions of dollars in sales from primary series vaccinations — especially in developed markets.

While Novavax’s misfortunes can’t be overlooked, the company does have clearly defined catalysts working in its favor. To begin with, Novavax brings differentiation to the table. The company’s vaccine, NVX-CoV2373, is a protein-based vaccine designed to teach a person’s immune system how to fight back against COVID-19. People who’ve not wanted to take a messenger-RNA-based vaccine now have an alternative with the Novavax vaccine.

What’s more, NVX-CoV2373 is one of only three COVID-19 vaccines to hit the elusive 90% vaccine efficacy level. This should make it a popular choice for initial vaccines and booster shots moving forward.

However, the most-exciting thing for Novavax is the realization that its drug-development platform works. Having successfully developed a vaccine for COVID-19, the company can focus its attention on variant-specific COVID-19 vaccines or combination vaccines, such as influenza/COVID-19. Getting that first approved/emergency-use authorized treatment out of the way is a big hurdle cleared.

Lastly, Novavax ended September with $1.28 billion in cash and cash equivalents. This should be more than enough to further its clinical programs and provide a relatively sturdy floor beneath its current share price. With plenty of opportunities in Novavax’s future, look for this biotech innovator to double your money by 2025. 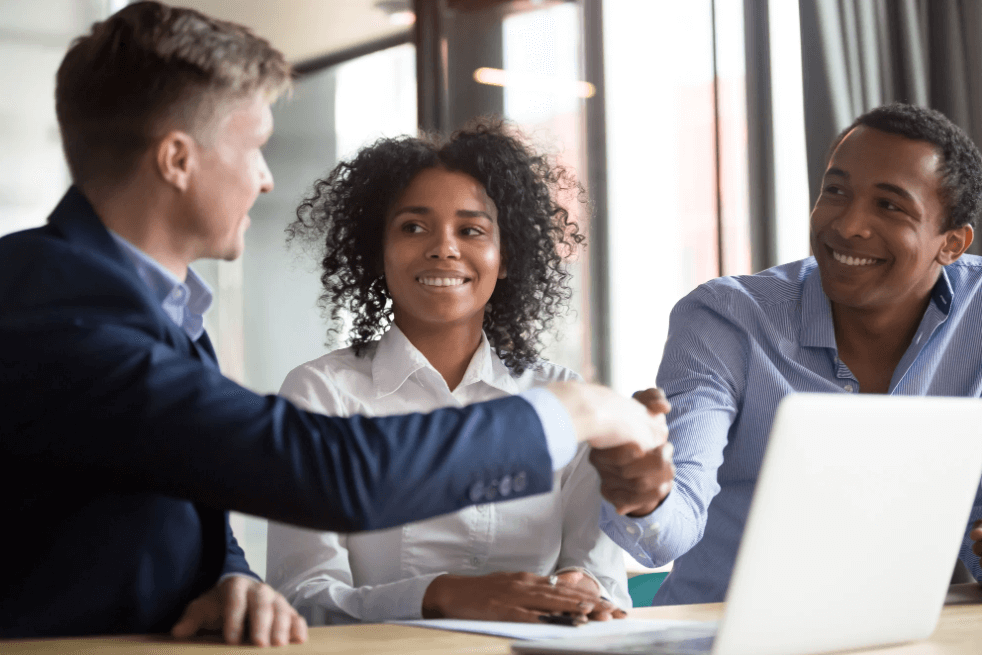 A third remarkable growth stock that’s been taken to the woodshed during the Nasdaq bear market, but has the potential to double your money by 2025, is cloud-based lending platform Upstart Holdings (UPST -3.38%). Upstart’s shares have plummeted by an almost unfathomable 95% in 13 months.

The glaring issue for Upstart is the Federal Reserve’s hawkish monetary policy shift. With the Fed having no choice but to aggressively raise interest rates to bring down the prevailing inflation rate, loan demand has fallen off a cliff. To add fuel to the fire, loan delinquencies and charge-offs are at higher risk of climbing when the U.S. economy weakens. Yet even with these headwinds, Upstart’s innovation has industry-disrupting potential.

For decades, loans have been vetted using stodgy metrics like credit scores. Upstart is expounding on this process by leaning on artificial intelligence (AI) and machine-learning. The company’s automated software is grower smarter and more efficient at processing and approving loans over time. During the third quarter, 75% of all loans it processed were entirely automated. That helps save its 83 bank and credit union partners time and money. 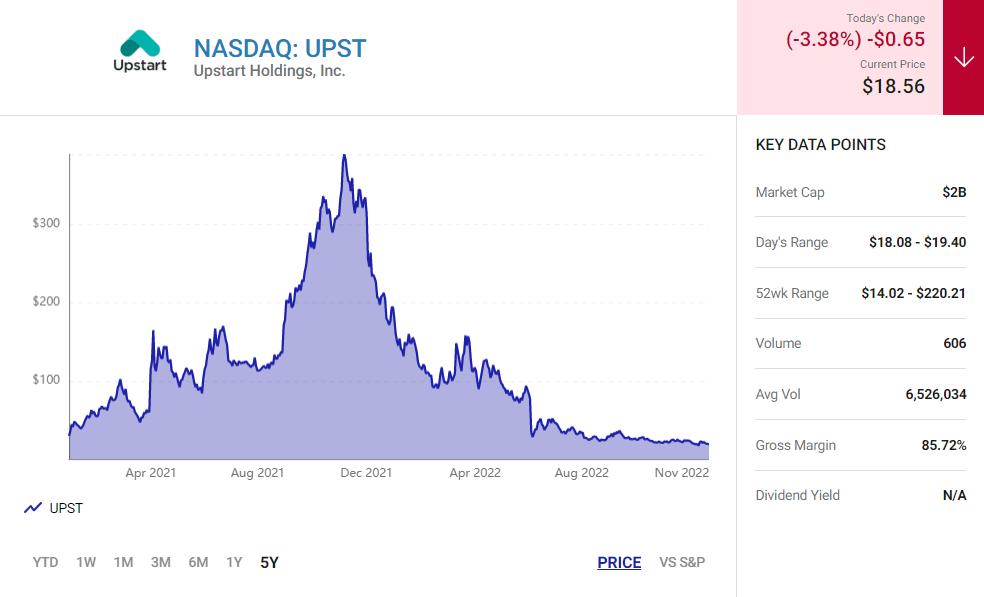 Although it could be a bumpy couple of months until interest rates and bond yields peak, Upstart has the technology in place to double your money by mid-decade.