US equities face much sharper declines than many pessimists expect with the specter of recession likely to compound their biggest annual slump since the global financial crisis, according to Morgan Stanley strategists.

Michael Wilson — long one of the most vocal bears on US stocks — said while investors are generally pessimistic about the outlook for economic growth, corporate profit estimates are still too high and the equity risk premium is at its lowest since the run-up to 2008. That suggests the S&P 500 could fall much lower than the 3,500 to 3,600 points the market is currently estimating in the event of a mild recession, he said.

“The consensus could be right directionally, but wrong in terms of magnitude,” Wilson said, warning that the benchmark could bottom around 3,000 points — about 22% below current levels.

The strategist — ranked No. 1 in last year’s Institutional Investor survey — isn’t alone in his view that earnings expectations are too optimistic. His counterparts at Goldman Sachs Group Inc. expect pressure on profit margins, changes to US corporate tax policies and the likelihood of recession to overshadow the positive impact from China’s economic reopening.

One of the factors driving Wilson’s bearish view is the impact of peaking inflation. US stocks rallied last week amid signs that a modest ebbing in price pressures could give the Federal Reserve room to potentially slow its interest-rate hikes. Wilson, however, warned while a peak in inflation would support bond markets, “it’s also very negative for profitability.” He still expects margins to continue to disappoint through 2023.

Deutsche Bank Group AG strategists led by Binky Chadha also expect US earnings to decline in 2023. Still, they said stocks could rally through the fourth-quarter reporting season, supported by a year-end selloff and low investor positioning.

That view is at odds with findings of the latest MLIV Pulse survey, which showed market participants are bracing for a gloomy season to push the S&P 500 lower over the next few weeks. Earnings start in earnest on Friday with reports from the big banks including JPMorgan Chase & Co. and Citigroup Inc. 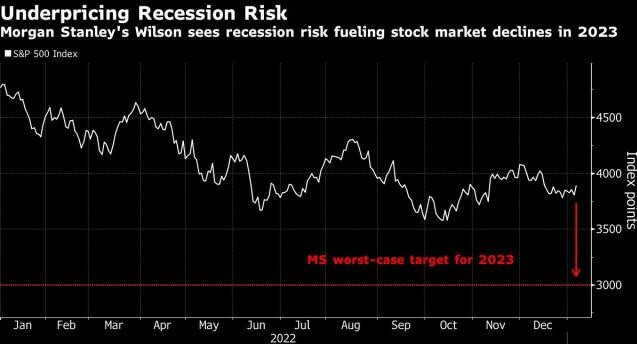