Bitcoin bull Michael Saylor says Meta should have stayed around longer in the crypto space.

“The mistake [they made] was not getting into the crypto space. They wasted many, many years of their time with the project they invested in,” the MicroStrategy CEO and founder said on.

This week, Diem — Facebook’s one-time crypto venture — said it sold its assets and intellectual property to crypto bank Silvergate Capital. Sale price: $182 million. The sale effectively ends Facebook’s push into the crypto space as it focuses resources on building out the metaverse.

Adds Saylor, “They have not embraced bitcoin. That is the problem.”

Well, that is one problem indeed in terms of Meta’s lack of diversification, which could have been helped by a push into crypto. The other ones being Apple iOS privacy changes and the surging TikTok, as seen through the prism of a shockingly bad fourth quarter and outlook from Meta.

Daily active users fell by 1 million. Operating profit margins in the Family of Apps segment declined 600 basis points from the prior year.

Meta shares were rocked to the tune of 25% on Thursday’s session. 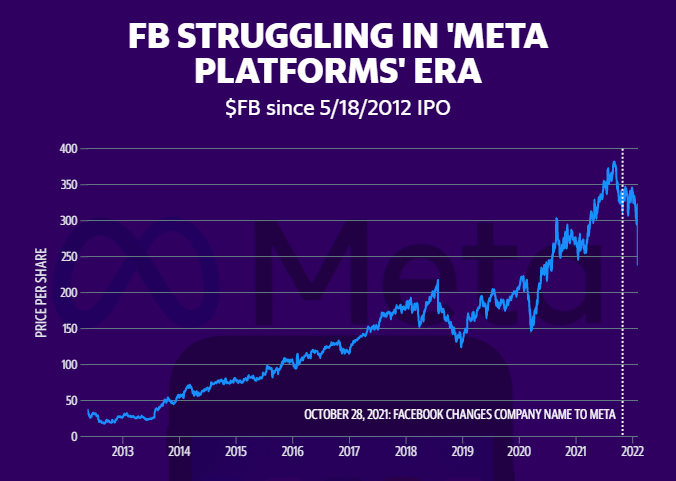 The company warned the Apple iOS changes would hit revenue by a whopping $10 billion this year.

“There is now a dramatic fundamentals gap between Google and Facebook. And one could argue that Facebook is now facing a Netflix-like negative inflection point,” warned EvercoreISI tech analyst Mark Mahaney.