Rising costs, debt-ridden balance sheets, and a renewed focus on profitability weighed on the embattled sector as investors quickly punished companies struggling to turn a profit.

Netflix (NFLX) shares are down about 50% on the year, while companies like Warner Bros. Discovery (WBD) and Spotify (SPOT) have sunk more than 60% with Roku (ROKU) plummeting a whopping 80%.

Disney (DIS), once a Wall Street darling, also slid 45% on the year, and the stock is heading toward its worst year since 1947 after the much-anticipated “Avatar” sequel missed opening weekend expectations to cap off a challenging year for the House of Mouse.

In this year alone, the stock market wiped a whopping $500 billion-plus in market capitalization from the world’s biggest media, cable, and entertainment companies with more pain expected in 2023 amid higher interest rates and an unfavorable macroeconomic environment.

So, what exactly happened — and what could happen next? 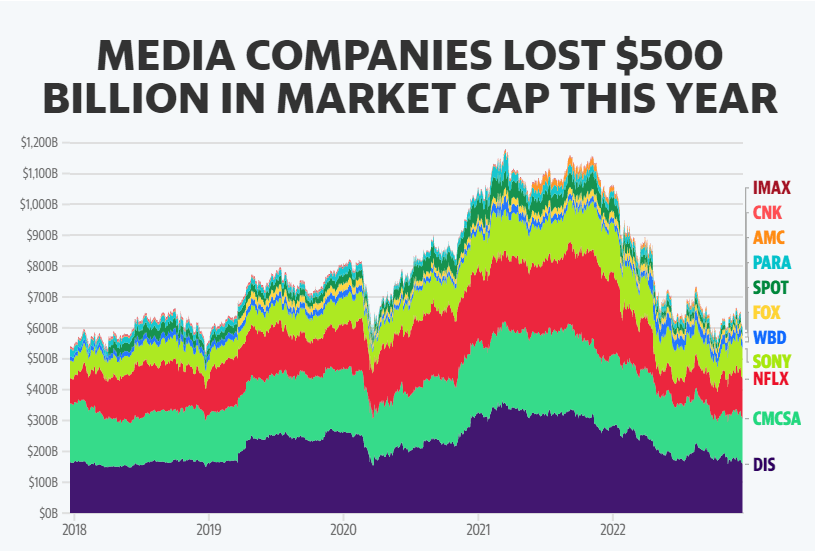 Wall Street’s profit push: ‘Time to be a real company’

2022 was a clear “soul searching” year for media after the industry experienced a bumpy ride throughout the pandemic with record highs and jarring lows.

As the “stay at home” trade ran its course, peak subscriber penetration levels in the U.S. and Canada resulted in streaming companies quickly seeing growth flatten.

Netflix, the long-time leader of the streaming wars, lost subscribers for the first time in its history as its market cap sank from more than $267 billion at the end of 2021 to roughly $130 billion. 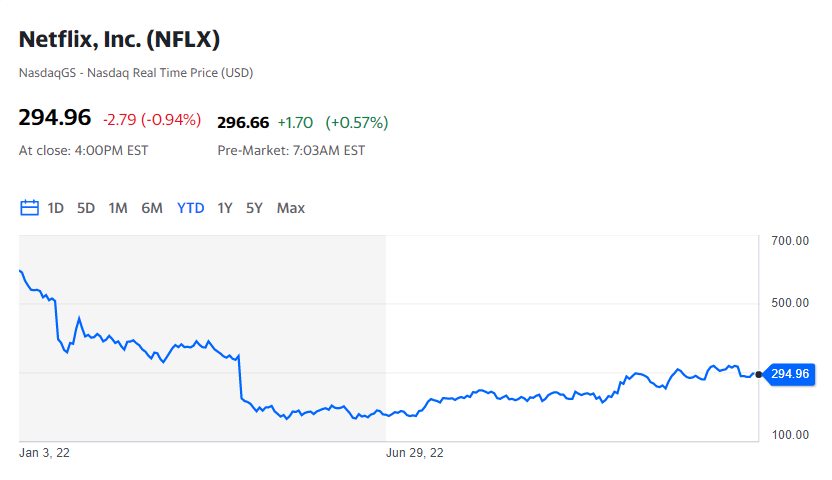 Stalling subscriber growth has led to heightened criticism of production budgets, which have sharply increased as competition intensifies. Netflix committed $18 billion to content alone in 2022 while Disney upped its budget by $8 billion this year to $33 billion.

Among companies that have begun to pivot from linear to streaming (excluding platforms like Netflix, Amazon, and Apple), direct-to-consumer content spending jumped from $2.7 billion in 2019 to $15.6 billion in 2021, according to Wells Fargo data, cited by Variety.

That number is expected to balloon to nearly $24 billion this year — despite mounting streaming losses.

Warner Bros. Discovery, which has seen its market cap cut in half amid its messy restructuring efforts, reported free cash flow of negative $192 million in the third quarter, compared to $705 million in positive cash flow the year prior. The company now plans to take on $3.5 billion in content impairment and development write-offs by 2024.

Amid the race to profitability, advertising has become one potential bright spot for investors — despite the global slowdown in ad spending.

Netflix rolled out its $6.99 offering in November, while Disney+ followed one month later at a price point of $7.99. Wall Street analysts remain largely bullish on the profitability aspects of ad tiers, while advertising experts have referred to the debuts as a make-or-break moment for the media industry.

“It is absolutely a pivotal moment for the industry,” Kevin Krim, CEO of advertising measurement platform EDO, previously told.

“I think what we have learned as an industry is that there’s a limit to the number of consumers out there that will pay,” Krim said. “Advertising is a really smart way to subsidize those subscription fees.” 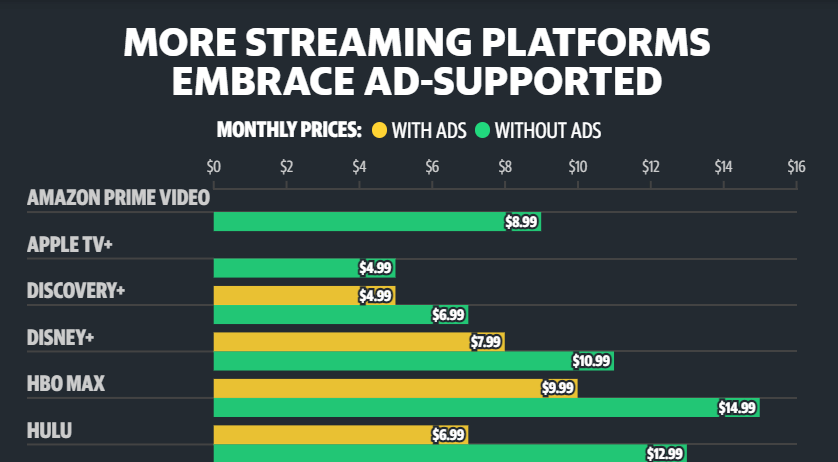 Industry experts agree offering lower-cost, ad-supported options serve as an important hedge against churn — something all streamers want to avoid amid increased competition.

Christian added data will be a big driver (and potential money maker) when it comes to more targeted advertising in 2023: “Data can drive up the pricing of the different ads they’re pushing on the platform.”

Still, the benefits of ad-supported will likely take time to mature. 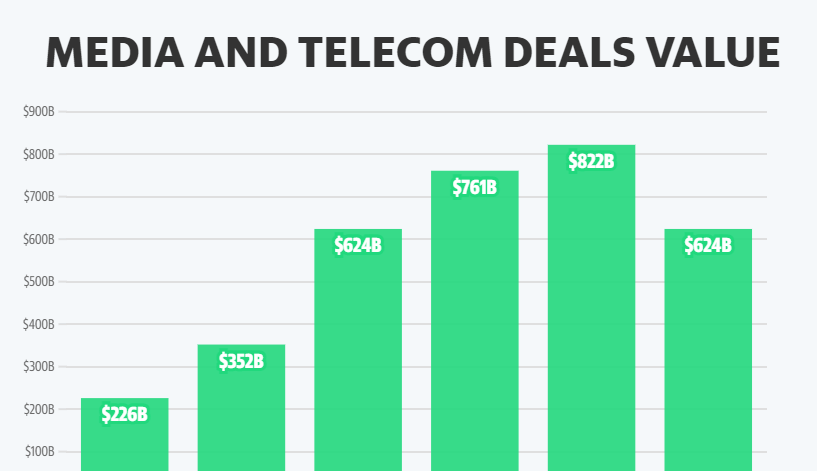 Coupled with a greater focus on content spend and advertising, investors should also expect more media merger activity next year.

Possible acquisition targets in 2023 and beyond include the embattled Warner Bros. Discovery.

Lionsgate’s film and TV studio, which the entertainment giant plans to spin off into a separate company, will also be for sale, while AMC Networks (AMCX) continues to undergo a restructuring that could result in an acquisition.

Needham’s Laura Martin wrote in a recent client note Paramount could be attractive to unload, while smaller players like WWE (WWE), Curiosity Stream (CURIW), and Chicken Soup for the Soul (CSSE) will likely sell due to their size.

Disney CEO Bob Iger, who returned to the media conglomerate to much fanfare in November, will also face a slew of decisions — including what to do with notable assets like Hulu (sell it to Comcast?) and sports behemoth ESPN (spin it off?). 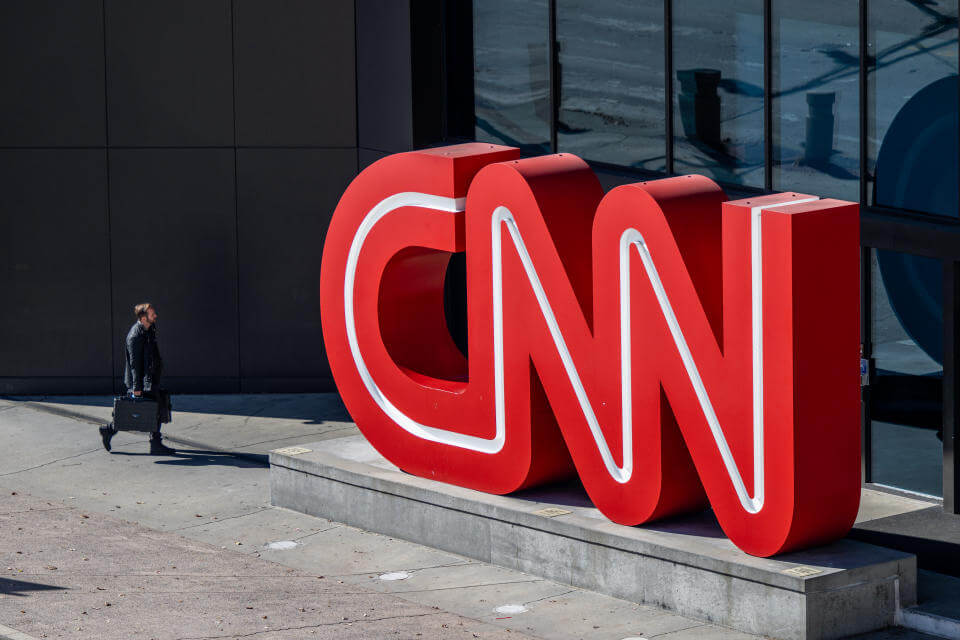 Amid greater profitability concerns, media giants have enacted mass layoffs and hiring freezes in an attempt to stop the bleeding. More than 3,000 jobs have been cut through October this year, according to data from Challenger, Gray & Christmas, cited by Axios.

Netflix laid off about 150 positions of the streamer’s 11,000 workforce in May, blaming the headcount reduction on “slowing revenue growth” and a greater depletion in spending.

Earlier this month, Warner Bros. Discovery revealed prominent Discovery executives will be exiting the company after it axed CNN+, nixed more CNN staffers and slashed 14% of its HBO Max workforce this year.

So far, the company has eliminated a reported 1,000-plus jobs across units as WBD CEO David Zaslav doubles down on restructuring efforts, which have also included scrapped projects and programs.

Paramount Global began to cut jobs in November, targeting its ad sales group, according to Deadline, while AMC Networks (AMCX) announced plans to lay off about 20% of its U.S. workforce amid CEO Christina Spade’s exit.

Similarly, Comcast’s cable unit made job cuts in November, while Roku (ROKU) slashed 200 jobs, or 5% of its workforce, shortly after its third quarter earnings results. 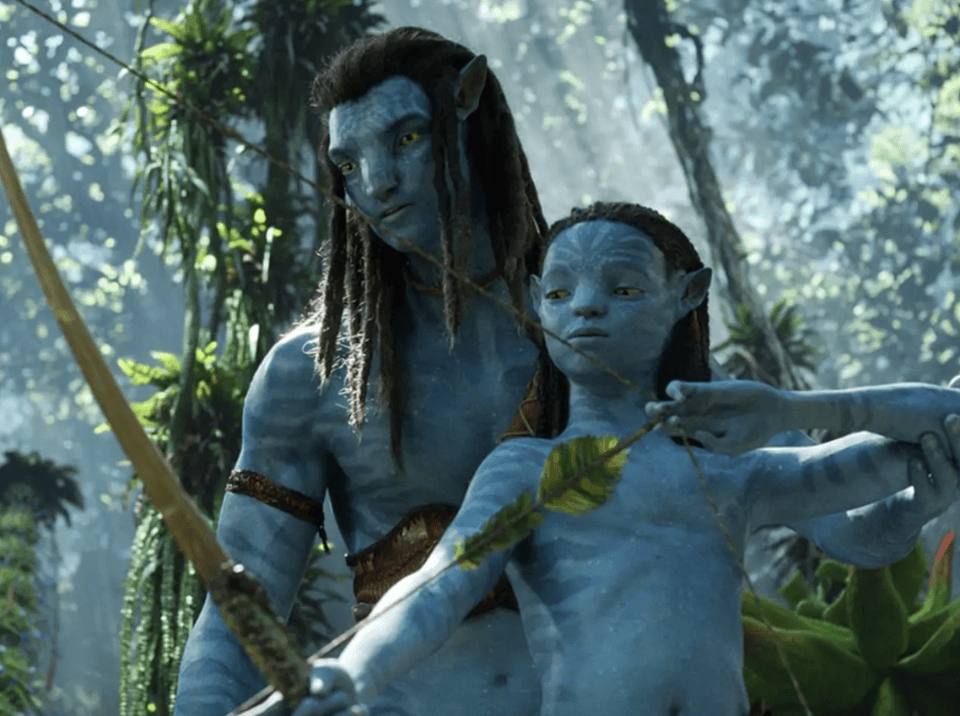 The theatrical industry continued to recover from pandemic losses in 2022 — although whether a complete comeback will be made remains to be seen.

Still, Disney’s “Avatar: The Way of Water” secured just $134 million in domestic markets over its three-day opening weekend, missing expectations and sending Disney shares to their lowest level since March 2020.

Despite the miss, theater executives championed the debut, surmising the movie will steadily add box office dollars over the holidays and well into 2023.

Streaming giants have embraced the theatrical, as well, with Netflix’s “Knives Out: Glass Onion” enjoying a successful limited theatrical release over Thanksgiving week, while Amazon will reportedly invest $1 billion to produce 12 to 15 movies a year exclusively for theaters.

Overall, the domestic box office is estimated to bring roughly $7.4 billion for the year, according to Box Office Pro. Although that number still lags pre-pandemic figures by about 30%, there is hope that next year’s more beefed-up release schedule will help close the gap.