The market moves came amid confirmation that the labor market remains very tight and a reiteration from the Federal Reserve that it has a “ways to go” before the central bank could declare victory in its fight with inflation.

All of last week’s developments are related in a pretty complex way. But it all ultimately boils down to one thing: Demand in the economy is very strong.

“We are taking forceful steps to moderate demand so that it comes into better alignment with supply,” Fed Chair Jerome Powell said on Wednesday.

Yes, broad measures of economic growth are cooling, and expectations for corporate earnings growth have been deteriorating. But these trends belie what continues to be very strong underlying demand.

Economic activity would be hotter and corporate sales would be more robust if businesses had more workers on staff to address all of the demand. This is corroborated by the fact that there were a whopping 10.7 million job openings as of September, or nearly two job openings per unemployed person. 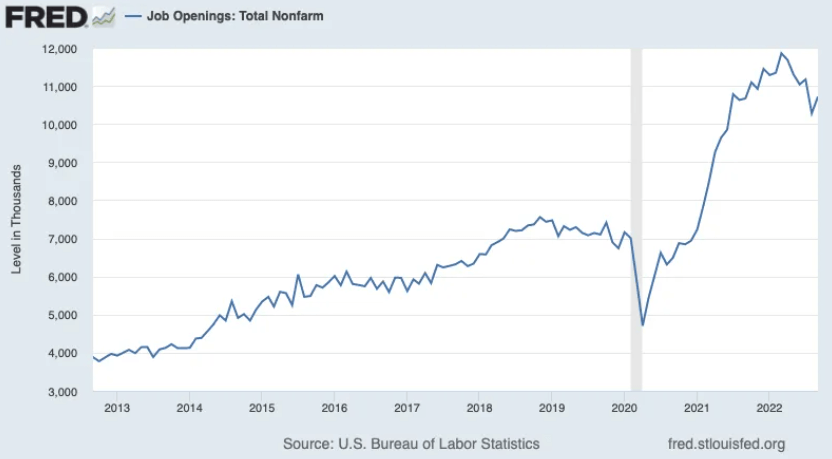 Overall, 61% reported hiring or trying to hire in October, down 3 points from September. Fifty-five percent (90% of those hiring or trying to hire) of owners reported few or no qualified applicants for the positions they were trying to fill (down 2 points). Thirty percent of owners reported few qualified applicants for their open positions (up 3 points) and 25% reported none (down 5 points from September’s 48-year record high).“ – National Federation of Independent Business“ There are still challenges in hiring qualified workers…“ – Institute for Supply Management Services PMI“Overall labor market conditions remained tight, though half of Districts noted some easing of hiring and/or retention difficulties. Competition for workers has led to some labor poaching by competitors or competing industries able to offer higher pay.“ – Federal Reserve Beige Book

From Goldman Sachs’ analysis of Q3 earnings calls: “Most firms continue to hire in order to satisfy strong levels of customer demand.“

Unfortunately, while these job openings represent a massive tailwind for the economy, they also explain why we continue to have high inflation. That’s because employers have to raise wages aggressively to recruit and retain workers, which forces them to raise prices on what they’re selling to offset higher costs.

At the same time, higher wages and continued job growth puts more money in the pockets of more and more consumers, further fueling demand amid tight supply. All this is reflected by a metric called the index of aggregate weekly payrolls — the product of jobs, wages, and hours worked. Think of it as the total nominal spending capacity of the workforce. According to the Bureau of Labor Statistics (BLS), this metric increased by 0.2% month-over-month in October to a record high of 176.7, reflecting a 8.0% jump from a year ago. Before the pandemic, the annual growth rate was trending at around 5%. 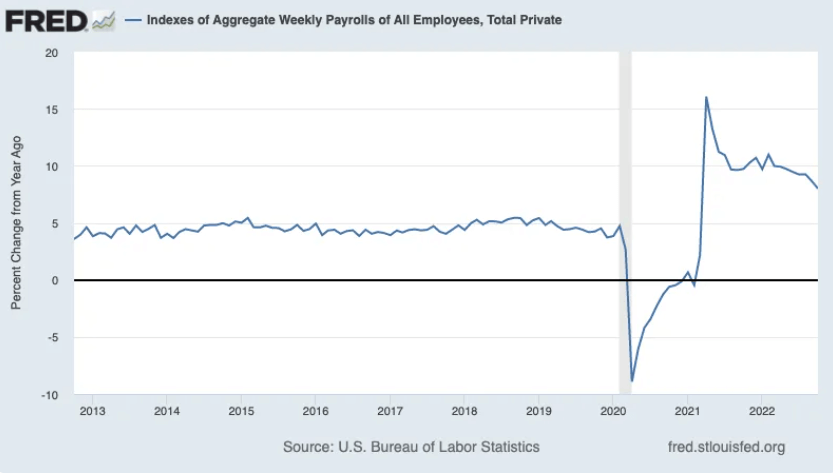 In the Fed’s eyes, rising wages and job growth — which continue to fuel demand — are all bad news in the context of inflation. And so it continues to tighten monetary policy aggressively, even if it means economic “pain.”

“The broader picture is of an overheated labor market where demand substantially exceeds supply,” Powell said. “We keep looking for signs that sort of the beginning of a gradual softening is happening and maybe that’s there, but it’s not obvious to me because wages aren’t coming down.“

In its effort to bring down inflation by slowing the economy, all the Fed can really do is intervene in the financial markets by tightening financial conditions. And tighter financial conditions manifest in the forms of rising interest rates, a stronger dollar, and falling stock valuations.

So as long as we get data that signals inflationary pressures — like Tuesday’s report showing job openings have increased — the Fed will continue to act in ways that are unfriendly to the financial markets and the economy. 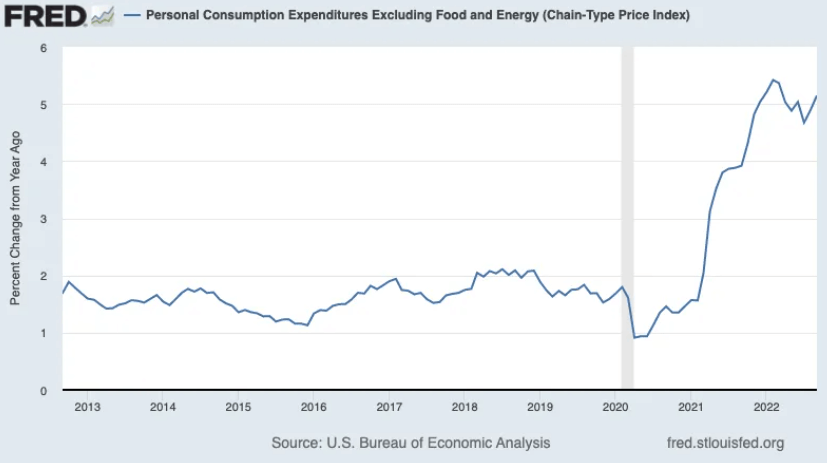 Fed-sponsored demand destruction may not be the only way out of the inflation problem.

The solution could certainly come from the supply side — such as a lot of open jobs getting filled enabling companies to produce more goods and services, or food and energy price pressures ease amid de-escalation in Ukraine.

But there’s actually a ton of evidence to suggest supply chains have already improved significantly. And there’s also evidence companies could be reining in prices as reflected by the fact that corporate profit margins remain near record highs.

Then why aren’t prices coming down faster? Paul Donovan, chief economist of UBS Wealth Management, wrote about this in an op-ed for the Financial Times on Wednesday:

… Companies have passed higher costs on to customers. But they have also taken advantage of circumstances to expand profit margins. The broadening of inflation beyond commodity prices is more profit margin expansion than wage cost pressures.How is this happening? Two forces have combined. Despite negative real wages, consumers have carried on consuming. Strong post-pandemic household balance sheets have allowed lower savings and increased borrowing to offset the sorry state of real wages. The resulting resilience in demand has given companies the confidence to raise prices faster than costs.

In other words, companies aren’t cutting prices because consumers have the financial capacity to pay up. This is the unfortunate downside of all this hiring, and it’s why all the excess savings consumers have accumulated is actually an economic curse.

Donovan also argued that “the power of storytelling has conditioned consumers to accept price rises.” Indeed, the Fed and others have been very vocal about how inflation is tied to wage growth.

“And consumers seem to be buying stories that seem to justify price increases, but which really serve as cover for profit margin expansion,” Donovan said.

Perhaps another way out of this inflation problem is to shift the narrative consumers are hearing, which could put corporations under more pressure to cut prices. From Donovan:

“… higher unemployment and lower wages are not the only possible cure for it. Policy has more routes to lower inflation if the cause is about profits. Of course, higher unemployment and lower wages would weaken demand and squeeze profit margins. But any softening of demand — for instance through slowing the leverage of household balance sheets — would also affect pricing power…”

To put it more explicitly, consumers could push back by actively cutting back on spending.

This is the kind of thing that risks sending the economy into recession. But this end result of demand destruction is exactly how the Fed is trying to bring down inflation — the Fed is just aiming to destroy demand by putting people out of work and giving companies more leverage to not raise pay aggressively.

If consumers (it doesn’t have to be everybody) cut back on spending (a little can go a long way), then they can destroy demand on their own terms and not the Fed’s. Rather than having the Fed forcefully taking away some people’s ability to spend, consumers who are able to could voluntarily cut back. (They could start by cutting back at companies who’ve been raising prices while publicly celebrating their resilient profit margins.)

There were a few notable data points from last week to consider: 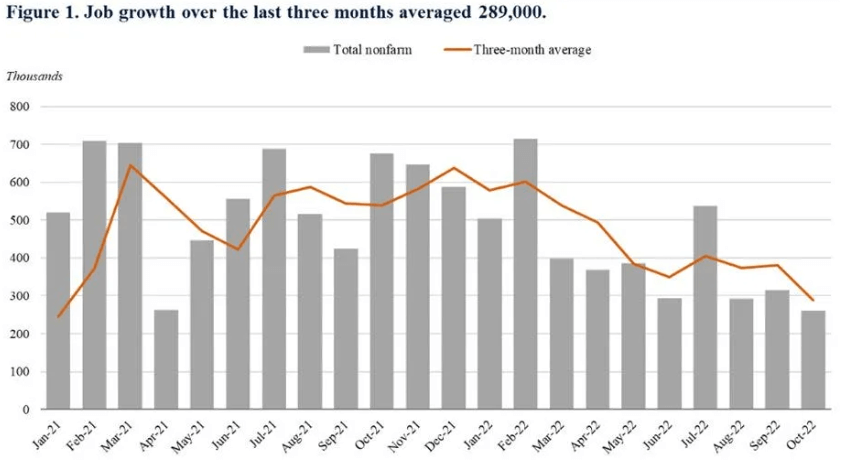 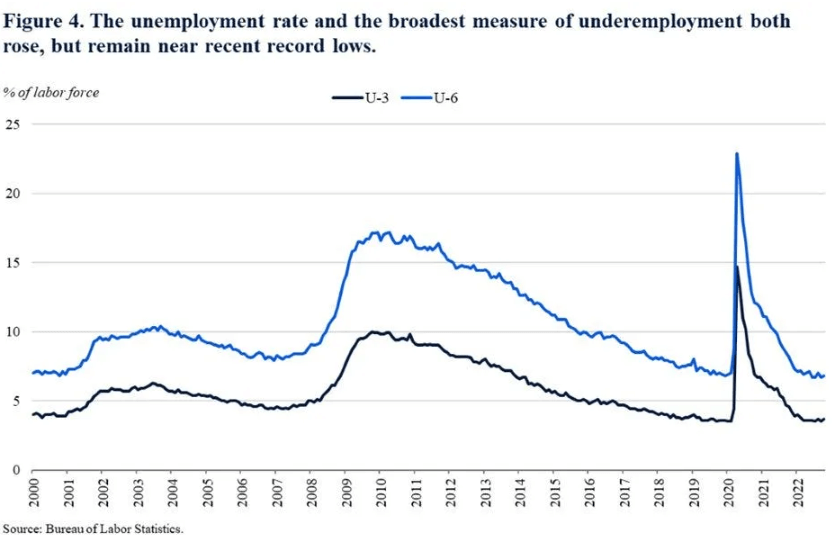 Wage growth continues to cool with average hourly earnings for all private sector workers and non-managerial workers growing at a decelerating pace. 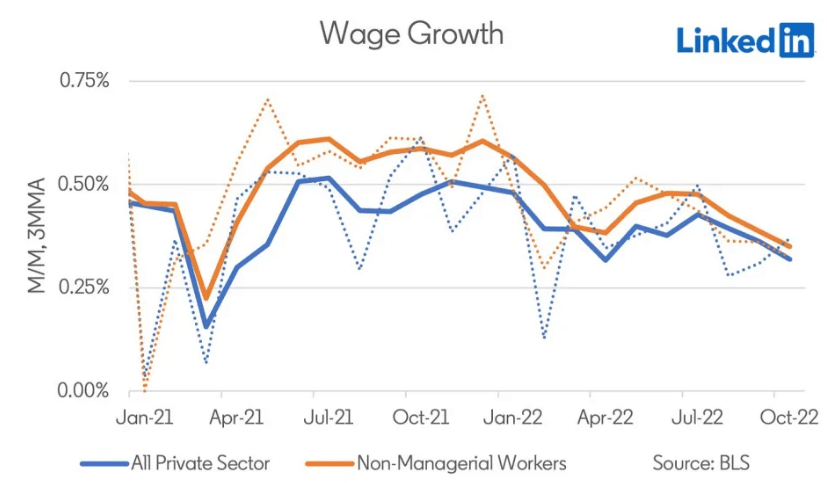 💸 Changing jobs gets you a bigger raise. From payroll processor ADP: “Job changers continued to record double-digit, year-over-year pay increases, but momentum in those gains is ebbing. For these workers, annual pay growth edged down for the third-straight month, to 15.2% in October from 15.7% in September. For job stayers, pay gains were 7.7%, in line with recent months.“

📈 Job openings rise. According to BLS data released Tuesday, U.S. employers had 10.7 million job openings listed in September, an unexpected increase from the 10.3 million openings reported in August. However, it remains below the record high of 11.9 million openings in March. Overall, job openings can explain everything happening in the markets and the economy right now. 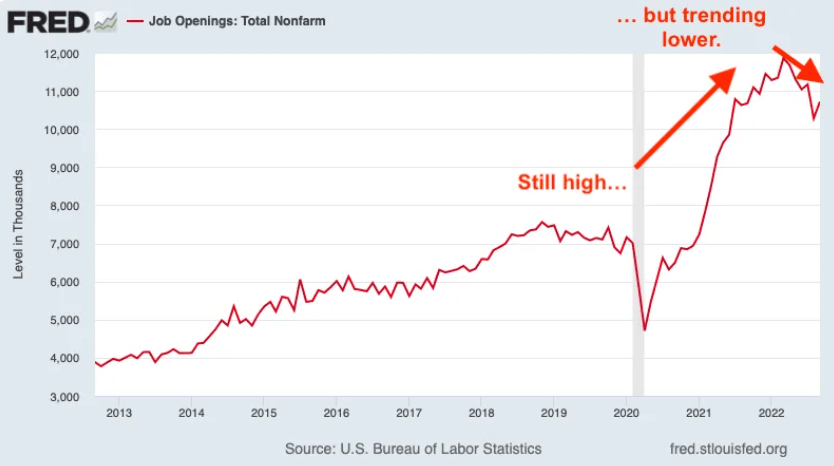 💪 Layoff activity remains low. According to BLS data, there were 1.3 million layoffs in September. While there’s no question this represents a lot of people going through a challenging time, this figure reflects just 0.9% of the number of people employed during the period. While some of this may be explained by labor hoarding (read more on this here), the elevated level of job openings suggests companies are looking to add workers, not lay them off. 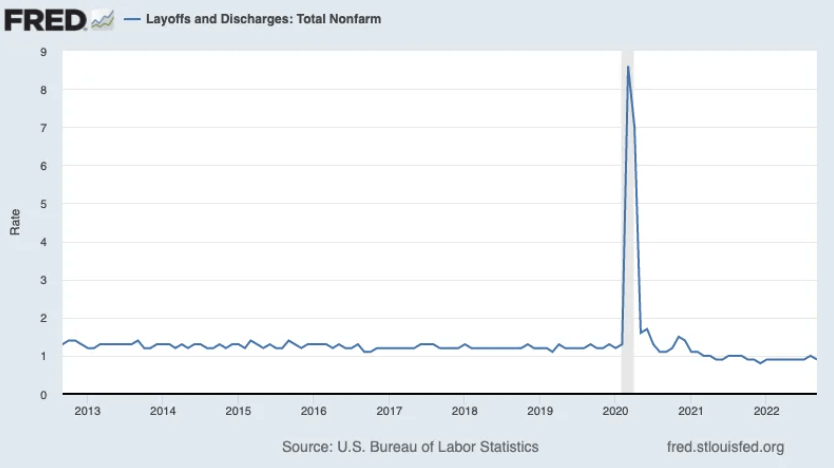 👍Unemployment claims remain low. Initial claims for unemployment benefits declined to 217,000 during the week ending Oct. 29, down from 218,000 the week prior. While the number is up from its six-decade low of 166,000 in March, it remains near levels seen during periods of economic expansion. 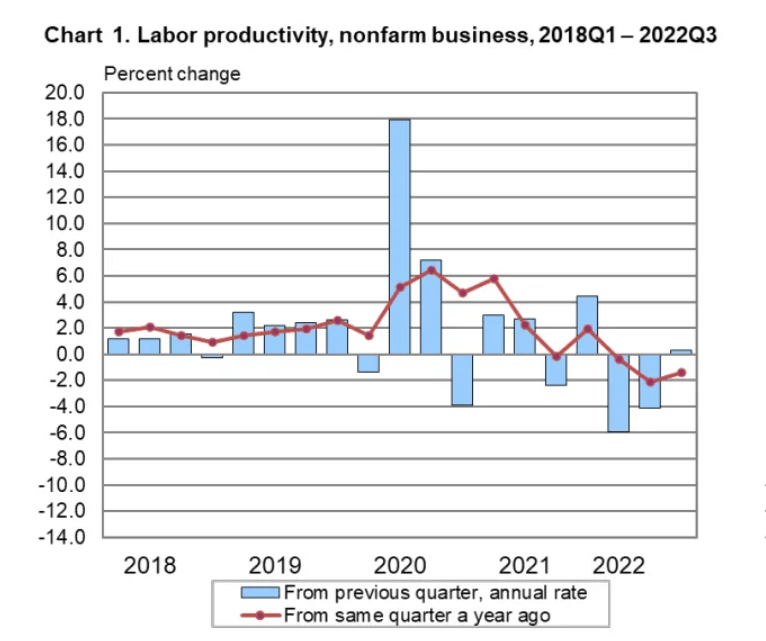 🛠 Manufacturing cools. The ISM’s Manufacturing PMI fell to 50.2 in October from 50.9 in September. A reading above 50 signals expansion, which suggests manufacturing activity continues to expand but at a decelerating rate. 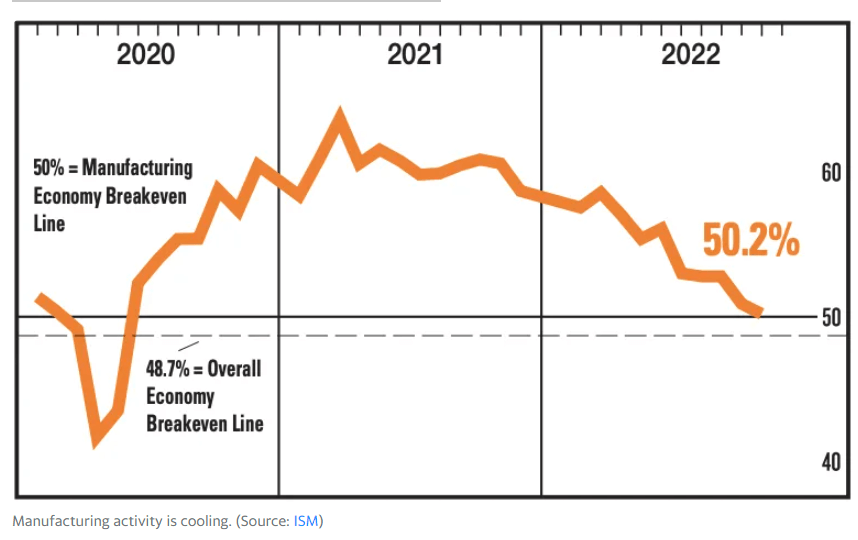 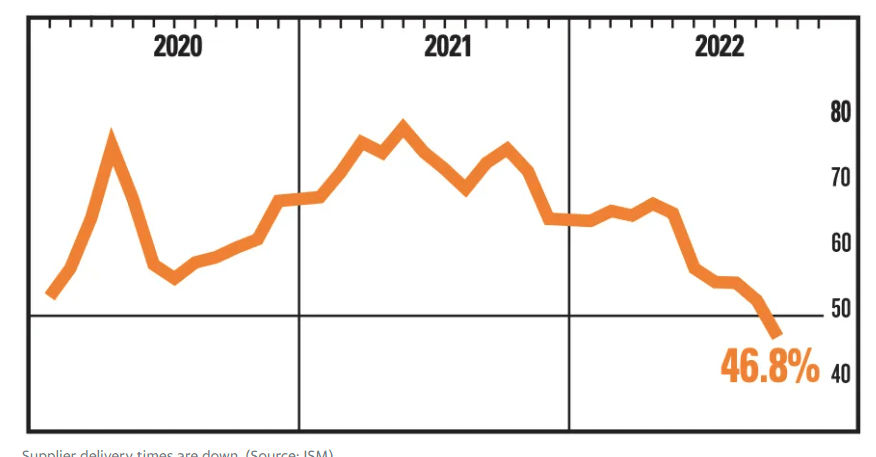 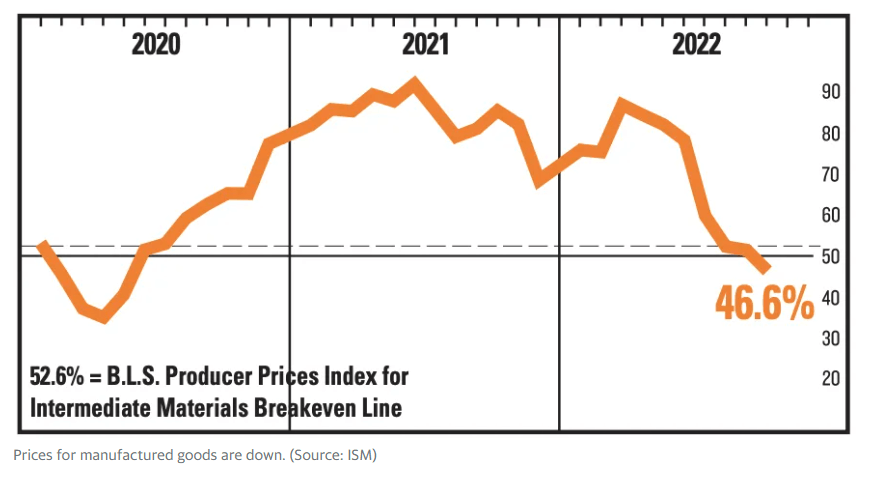 📈 But services prices are up. According to the ISM’s Services PMI, prices for services increased at an accelerating rate in October. The divergence between goods prices and services prices may be a reflection of the ongoing trend of consumers spending more money “doing stuff” and less money “buying stuff.” 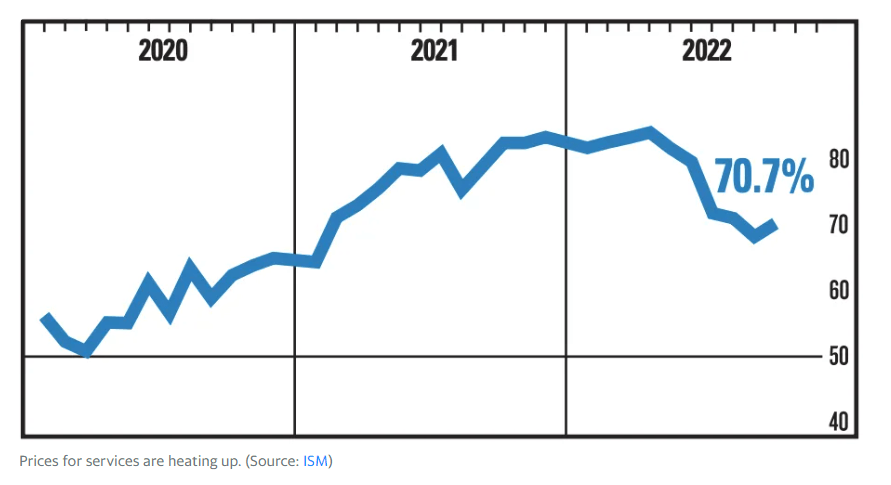 🚗 Auto sales pick up. From Calculated Risk: “Wards Auto estimates sales of 14.90 million SAAR in October 2022 (Seasonally Adjusted Annual Rate), up 10.4% from the September sales rate, and up 12.7% from October 2021… The impact of COVID-19 was significant, and April 2020 was the worst month. After April 2020, sales increased, and were close to sales in 2019 (the year before the pandemic). However, sales decreased late last year due to supply issues. It appears the ‘supply chain bottom’ was in September 2021.“ 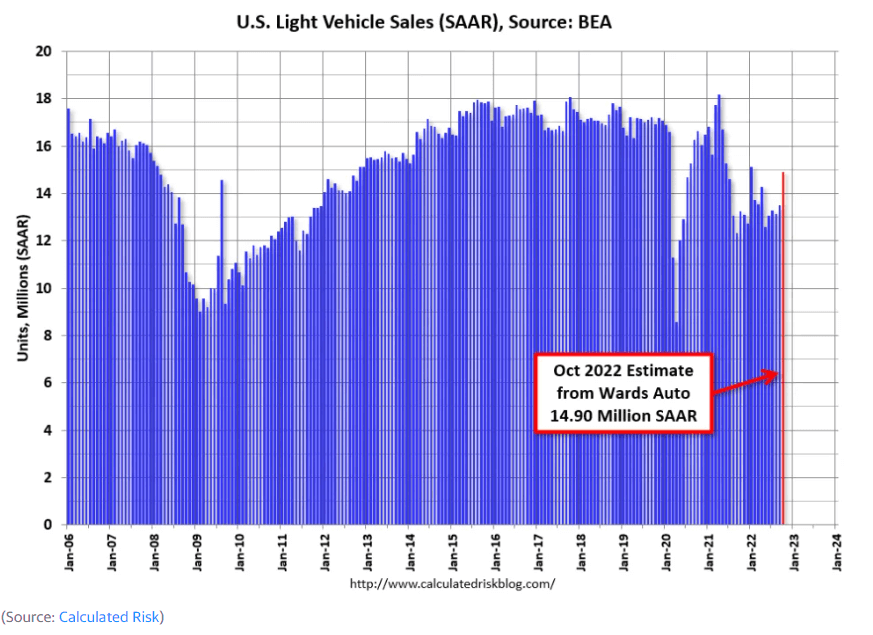 📈 Credit card interest rates are going up. The average variable credit card rate is now 18.77%, the highest since February of 1993, according to [Ted Rossman, senior industry analyst at Bankrate.com]. ‘It will soon blow past the all-time record of 19.00% set in July 1991,’ he said. At the start of the year, the average credit card charged 16.30%. 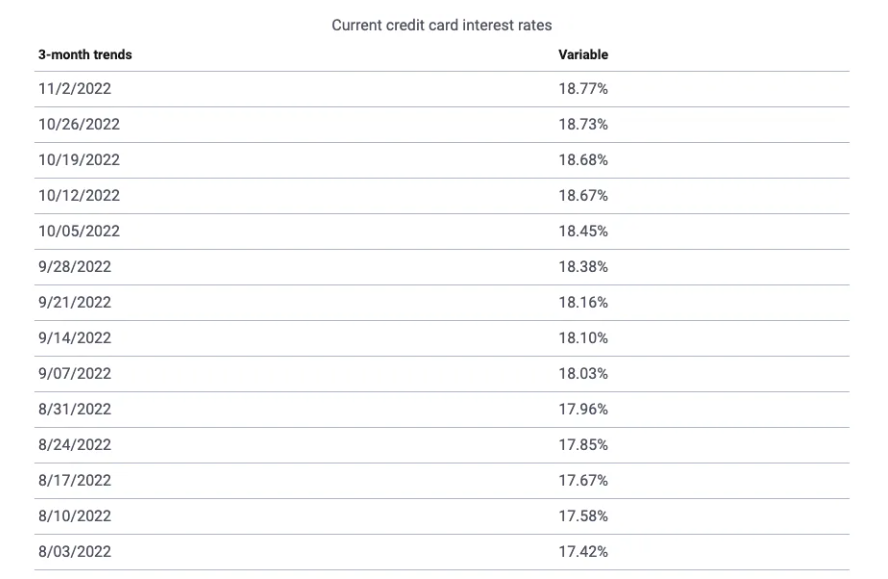 Putting it all together 🤔

The economy is slowing.

The good news is that there’s enough underlying demand that it’s supporting the labor market.

The bad news is that job growth and rising wages are helping to keep inflation high.

As such, the Fed continues to tighten monetary policy, which means the market beatings will continue and the risk the economy sinks into a recession will intensify.

There’s still a strong case to be made that any downturn won’t turn into economic calamity given that the financial health of consumers and businesses remains very strong.

And long-term investors should remember that recessions and bear markets are just part of the deal when you enter the stock market with the aim of generating long-term returns. While markets have had a terrible year so far, the long-run outlook for stocks remains positive.