Is Ford Stock A Buy Or Sell Ahead Of Earnings?

Ford Motor (F) began the new decade with optimism as it emerged to compete in the era of smart vehicles and clean energy. The automaker is investing heavily in new technologies to keep pace in autonomous vehicles, ride sharing and electric cars. But does all that effort make Ford stock a buy right now?
The unveiling of the Mustang Mach-E in November 2019 was a key milestone in the company’s pivot toward what it called “the digital future.” The Ford Mustang Mach-E, an all-electric crossover, made its commercial debut in the U.S. in late 2020. Ford is beginning production of the Mach-E, a competitor to the Tesla (TSLA) Model Y, in China as well.

Ford’s investment in electrification helped push shares to a 140% gain in 2021. That led to Ford briefly surpassing General Motors (GM) in market cap for the first time in five years. But where does Ford stand now? If you’re thinking about buying shares, it’s key to analyze the fundamental and technical picture first.

Ford plans to slash 8,000 jobs to fund EV spending. Those cuts will mainly come from Ford’s internal combustion unit, Bloomberg reported. Ford stock rose on July 21 after the news as the automaker announced a slew of moves to reach its ambitious production targets. In addition to rumored labor cuts, Ford also confirmed that it had secured 100% of the battery cell capacity needed to support its annual target of 600,000 electric vehicles globally by late 2023.

In June, Ford announced plans to invest $3.7 billion to boost EV and gas-engine vehicle production. That money will go into retooling and upgrading factories in Michigan, Ohio and Missouri. Ford’s investment is also expected to create 6,200 union manufacturing jobs.

The Detroit automaker’s latest spend to expand EV production reflects Ford’s growing investment in the electric vehicle market. In mid-March, Ford extended a deal with Volkswagen (VWAGY) that would double European EV production to 1.2 million cars by 2023. The automaker also made initial agreements with SK Battery and Koc Holding to build an EV battery plant in Turkey.

In February, Ford boosted its EV spend by $20 billion. That investment added to the $30 billion Ford already earmarked for electric vehicles through 2025. Those investments were followed by the separation of the company’s EV and gas units. The growing investments in the EV segment come amid soaring sales of Ford electric models. The company had to close orders for its hybrid 2022 Maverick pickup truck due to overwhelming demand. Orders for the 2023 Maverick will resume in the summer.

Ford auto sales grew in Q2 despite an overall industry slump. Overall, Ford sold 483,688 vehicles last quarter. That’s a gain of 1.8% year over year. Though the auto maker missed analyst expectations of 5.1% sales growth, it bucked a 21% decline for the automotive industry as a whole.

Monthly EV sales totals also continued to climb, surging 77% last month, though still from a relatively low base. Ford sold 4,353 EVs in June. Those numbers include 1,837 units of the F-150 Lightning all-electric pickup in its first full month of sales. More than 75% of those who reserved the Lightning EV, a rival to the upcoming Tesla Cybertruck. Additionally, Mustang Mach-E EV sales fell 21% in June, but are up 36% year to date.

Ford looks to be positioned for a strong EV sales month in July. Dealer stock for both the F-150 Lightning and Mustang Mach-E is higher, Ford said in a July 5 release.

Ford Q1 earnings fell 46% to 38 cents per share excluding items. Revenue also declined 5% from last year to $34.5 billion. The automaker saw net profit weighed down thanks to a loss in valuation of its stake in Rivian. Ford was an early backer of the EV startup and initially benefited from Rivian’s IPO surge. But Rivian stock quickly conceded those gains and is down 70% on the year. Ford executives said that Apr. 27 earnings suffered mainly due to a mark-to-market loss of $5.4 billion on its Rivian investment. Ford stock edged up slightly after-hours.

Operating performance also continued to be hampered by production pauses due to the ongoing chip shortage and supply challenges. Whole shipments of vehicles decreased 9% from a year ago to 970,000 cars. That contributed to lower pretax profits in North America and other key markets, including Europe and China.

Ford maintained its outlook for the year despite a bumpy Q1. Executives anticipate a full-year 2022 adjusted EBIT of $11.5 billion to $12.5 billion, up 15% to 25% from last year. CEO Farley also hinted in an Apr. 27 earnings release that there would be changes ahead to make the company more profitable as competition heats up in the EV market.

“There are big things that we do extremely well, like turning out high-demand vehicles at scale,” Farley said. “And others, in both existing and aspirational areas, where we need to improve — and will.”

Ford officially delivered its first electric pickup truck in late May, though it’s unclear how quickly production and deliveries will ramp up. The F-150 Lightning model received 200,000 reservations when it was first announced last May. Ford held a Lightning production launch event on April 26.

The truck’s initial $40,000 price tag has it set to vie with the Tesla Model 3 sedan which retails for $48,000. The Elon Musk-led car company will not begin producing its Cybertruck until at least 2023.

The F-150 Lightning launch is viewed as a pivotal moment in Ford’s turnaround. The automaker has invested billions in its transition to electric vehicle production.

Last month, Ford said that it would split the company’s EV business and gas-engine business in a major company reorganization. The Wall Street Journal reported that both operations will be kept in-house, “with separate names and their own leadership structures and profit-and-loss statements.” Ford stock jumped on the news.

To determine whether Ford stock is a buy now, fundamental and technical analysis is key.

The IBD Stock Checkup tool shows Ford stock has an IBD Composite Rating of 20 out of a best-possible 99. It remains far below the top tier of 90-plus-rated leaders, in terms of the most important fundamental and technical stock-picking criteria.

Ford stock has a weak EPS Rating of 19 out of 99. The rating compares quarterly and annual earnings-per-share growth with all other stocks. In the midst of transition, Ford has a spotty earnings track record. The company has reported more than its share of quarterly earnings declines over the past decade. However, estimates are pointing to growth.

IBD ranks the carmaker No. 11 among its automotive industry peers. The automakers group is No. 145 out of the 197 industry groups tracked by IBD. It’s ideal to focus on top stocks found in the top 40 IBD groups.

Ford stock surged 140% in 2021, hitting a long-term high in early January. But shares have fallen significantly since then, hitting a 52-week low on June 17. Shares recently climbed back above their downward sloping 10-week line on July 19 on EV battery news. That’s the first time Ford stock has been above that key support level since January.

Ford’s relative strength line — which measures a stock’s price performance vs. the S&P 500 — has pulled back significantly after spiking higher to start 2022.

IBD’s research shows the importance of focusing on stocks outperforming the market. 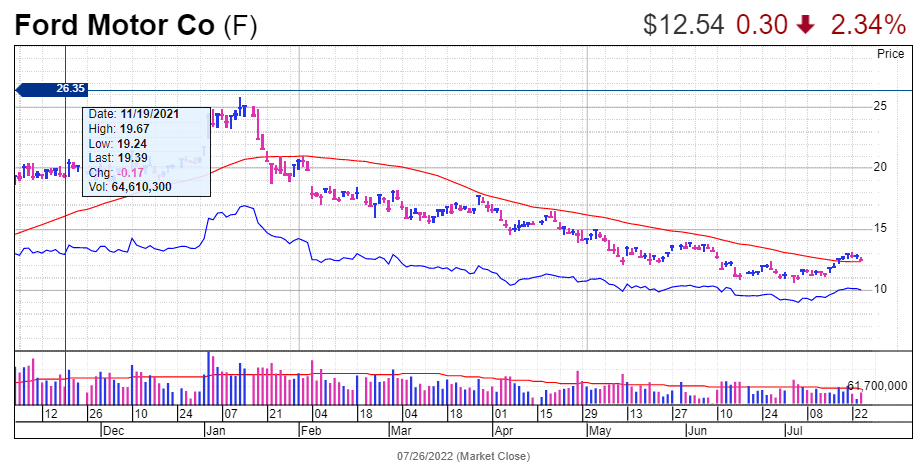 Ford stock raced higher in 2021 and into the new year, but retreated sharply during the recent market correction.

While shares have reclaimed their declining 50-day line, Ford stock is still 50% off its 52-week highs and well below its 200-day moving average. Unless Ford has a blow out earnings report, investors would do well to wait and see if Ford can sustain an upward move and build a proper base before thinking about buying.