Fresh weakness in Apple’s stock may offer a rare buying opportunity into the iPhone maker, says one money manager.

“We actually like Apple, and we are adding to our position,” said Victoria Fernandez, Crossmark Global Investments chief markets strategist, on Yahoo Finance Live, adding Apple’s fundamentals are “strong.”

Traders are taking the other side of that call on Thursday.

Apple’s stock fell more than 3% Thursday on a report from Bloomberg that the tech giant was indicating to component suppliers it may order fewer units than planned due to weakening consumer demand. The company had reportedly already cut iPhone orders for the year to 80 million from a prior target of 90 million.

Investors believed that cut to be due to the COVID-19 supply chain bottlenecks hitting corporate America rather than waning consumer interest in the new crop of iPhones. But, the Bloomberg report casts fresh doubt on that thesis.

Apple’s stock had been one of the hottest names in the market amid the latest stretch of broader market COVID-19 driven volatility as traders viewed the name as a safe-haven. Shares had gained an impressive 12% from Nov. 11 to Nov. 30. The Nasdaq fell 1% during the same span.

Headed into the latest news, Apple’s stock had risen in 11 of the previous 13 trading sessions. 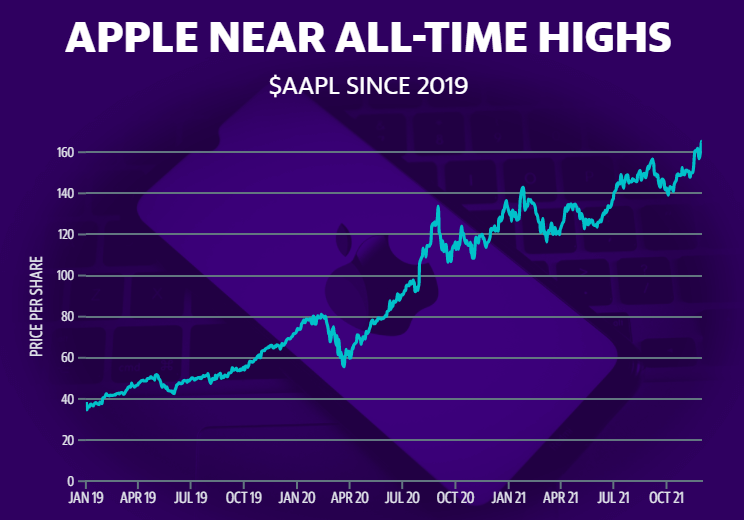 To be sure, the Apple bulls remain aplenty on Wall Street even on iPhone demand concerns.

“Our iPhone 13 checks continue to be much stronger than expected with our belief that Apple is now on pace to sell north of 40 million iPhones during the holiday season despite the chip shortage headwinds. The focus of the Street has been on the lingering chip shortage for Apple (and every other tech and automotive player), however the underlying iPhone 13 demand story for Cupertino both domestically and in China is trending well ahead of Street expectations in our opinion,” said Wedbush tech analyst Dan Ives in a research note this week.

Ives said Apple is his top tech stock pick, and believes it has the potential to reach $200 a share over the next 12 months.