Inflation: Higher income Americans are pulling back on spending

You might expect high-income households to fare relatively well during challenging economic periods. But they too are changing the way they spend as inflation eats away at purchasing power.

Some of Walmart’s sales gains came from inflation, which is driving up prices of food and other items. It also got a boost as families across income levels shopped at its stores and website.Chief Financial Officer John David Rainey told CNBC the retailer’s reputation as a discounter is attracting more middle- and high-income shoppers. About three-quarters of Walmart’s market share gains in food came from customers with annual household incomes of $100,000 or more.

This is not an anomaly.

According to The Bank of America Institute, spending among households earning more than $125,000 has declined over the last three consecutive months. 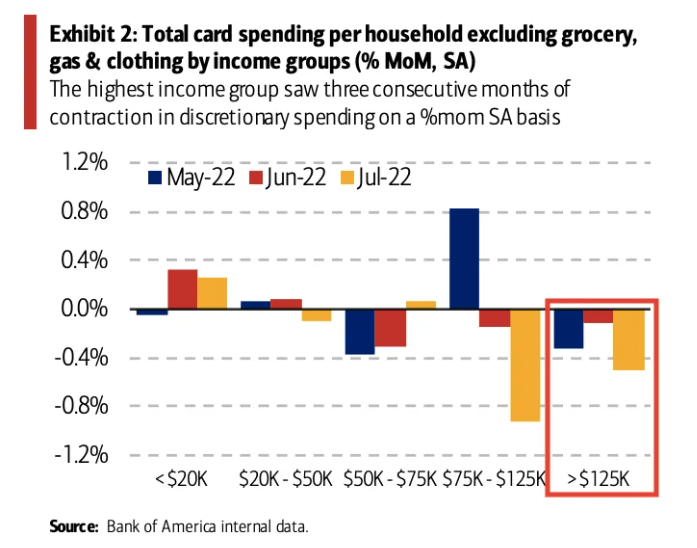 BofA notes that the deterioration in spending for higher-income households was more pronounced in discretionary categories (emphasis added):

While folks in the high-income demographic enjoy higher income, they tend to hold a greater share of their wealth in financial assets like stocks. And stocks have been getting slammed with the Federal Reserve tightening financial conditions.

“Discretionary services spending such as travel spending tends to be the most sensitive to household financial conditions,” BofA analysts said. “As such, negative real wage and deteriorating sentiment likely weighed on travel spending for the higher income consumers.”

The University of Michigan’s Surveys of Consumers observed in preliminary August results a divergence in sentiment among different income groups (emphasis added).

All components of the expectations index improved this month, particularly among low and middle income consumers for whom inflation is particularly salient. The year-ahead economic outlook rose substantially to just above its average reading from the second quarter 2022, while the two other expectations index components remain at or below their second quarter averages. At the same time, high income consumers, who generate a disproportionate share of spending, registered large declines in both their current personal finances as well as buying conditions for durables.

“Interestingly, jewelry spending per household remains strong for the higher income households on both %YoY and level basis,” BofA analysts observed in their July data.

“One possible explanation is that jewelry spending could be benefitting from the wedding boom this year,” they added. “According to wedding planning site The Knot, the total number of weddings is expected to reach 2.6 million in 2022, compared with 2.2 million in 2019.“

So wedding and bridal jewelry appears to be like french fries — regardless of the what’s going on in the economy, people will spend in these categories.

If BofA is right, then the strength in wedding jewelry is more than offsetting what appears to be going on in high-end watches. From Nicholas Colas, co-founder of DataTrek Research, in an email to subscribers on Friday:

If you go to the Rolex corporate website, you will see that a no-frills Daytona costs $14,550… Rolex Daytonas have been in high demand for many years, as much because of the brand and watch’s appeal to A-list celebrities as its own technical merits… The chart below shows “gray market” (used and new watches sold outside official dealer channels) prices for Daytonas over the last 5 years. Just before the Pandemic Crisis (December 2019), they were going for about $21,000 (44 percent over retail). A year later (December 2020), the price was slightly higher ($22,000). In 2021, Daytona prices increased quickly and reached $40,000 (170 pct above retail) in March 2022. Now, prices are starting to drop. A Daytona can be yours for about $36,000. 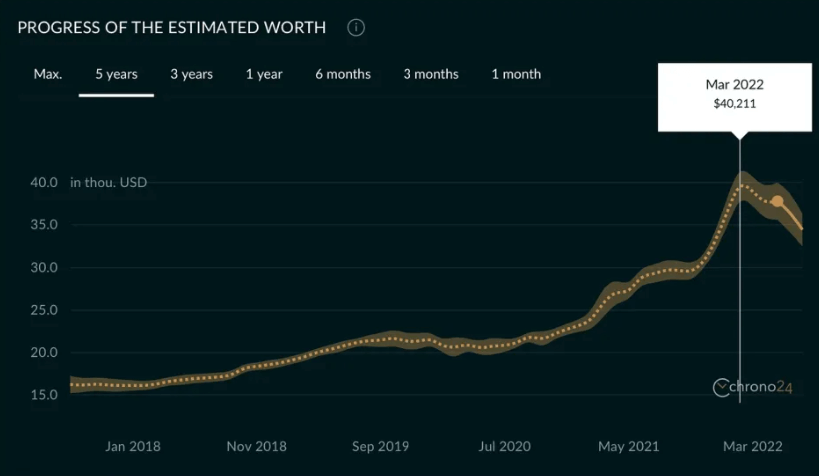 While the market price for a Rolex Daytona is still up from year-ago levels, it has come down in recent months. Kinda like stocks, which tend to be a bigger part of the wealthy’s portfolios.

“[T]he root cause of post-Pandemic Crisis Daytona inflation is high financial asset prices and confidence among the world’s wealthy that these would remain elevated,” Colas wrote.

Regardless of how you feel about people who earn more than you, it’s encouraging to see that even the richest folks are cutting back on spending during a time when slower spending will help bring down high inflation.

While inflation may have a long way to go before it reaches comfortable levels, it at least appears that tighter financial conditions and the cooling economy are helping to bring down prices.