Inflation data, Black Friday sales: What to know this week?

This holiday-shortened week, investors will receive a hefty set of new economic data and earnings results. New inflation reports will be especially closely watched, and preliminary data on Black Friday sales will help serve as an early gauge of holiday shopping strength for retailers.

But before these market holidays, one of the key pieces of economic data will be the Personal Consumption Expenditures (PCE) deflator for October out on Wednesday from the Bureau of Economic Analysis. This will help further show how inflation has evolved in the U.S., and will likely show yet another elevated print on U.S. price pressures.

The core PCE, which excludes more volatile food and energy prices and serves as the Federal Reserve’s preferred gauge of inflation, is also expected to pick-up in October and rise by 4.1% over last year. This would also represent the fastest rise in about three decades.

These heightened inflationary readings have added to investors’ concerns that rising prices could ultimately dampen the economic recovery by curbing consumer spending and prompting a faster-than-expected monetary policy tightening by the Federal Reserve. Though retailers’ quarterly results so far have largely reflected better-than-expected sales trends, consumers have been reporting increasing anxiety over the impacts of inflation on their finances. The University of Michigan’s preliminary November Surveys of Consumers showed sentiment fell to its lowest level in a decade, mostly due to a spike in inflation expectations.

A number of Federal Reserve officials have maintained that present levels of inflation will ultimately ease over the coming months, especially as the supply chain-related disruptions contributing to rising prices start to unwind. San Francisco Fed President Mary Daly, a voting member of this year’s Federal Open Market Committee, said that a preemptive move on raising rates to try and stem inflation now could have unintended consequences down the line.

“Monetary policy is a blunt tool that acts with a considerable lag,” Daly said during public remarks at the Commonwealth Club of California last week. “So, raising interest rates today would do little to increase production, fix supply chains, or stop consumers from spending more on goods than on services. But it would curb demand 12 to 18 months from now.”

The annual Black Friday shopping extravaganza is set to take place this week as the holiday shopping season ramps up.

Many retail analysts are expecting this end-of-year shopping season to jump, compared to last year, and set fresh highs, with pent-up consumer demand and still-elevated savings levels from government stimulus earlier in 2021 helping to fuel spending. However, a major question remains how well retailers will manage to meet this demand, given lingering supply chain disruptions, tight inventory levels and labor shortages heading into the peak holiday shopping period. These supply-side concerns could deter companies from offering major markdowns as they try to pass on higher costs to consumers and preserve margins.

“The discounts aren’t as deep as they were in the past. My guess is you’re seeing 5 to 10 percentage points less discounting going on in the environment,” Steve Sadove, Mastercard senior adviser and former Saks chairman and CEO, told Yahoo Finance last week. “Partly because inventories are in-line and partly because of supply chain issues. You’re seeing a lot of key items selling early. People are getting out there and getting the items quickly because they know that they’re going to be running out of stock.” 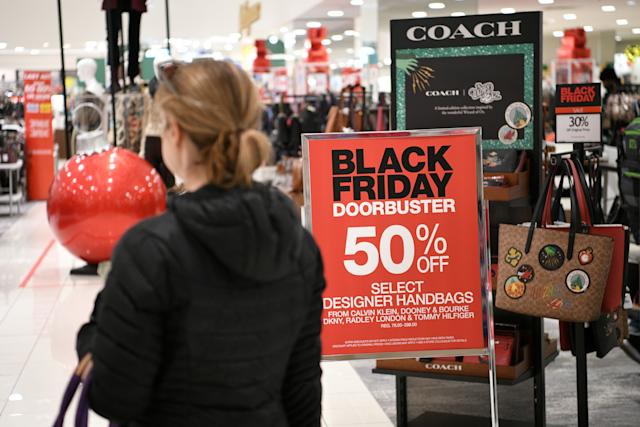 Concerns over out-of-stocks may also have pulled forward some spending for the holidays to earlier in November and even October, as consumers raced to avoid shipping delays and unavailable items. A report from the Commerce Department last week showed retail sales grew by a better-than-expected 1.7% in October month-on-month, representing the biggest jump since March.

Still, U.S. retail sales during Thanksgiving week alone are expected to grow by 10% over last year and by 12.2% versus to the same week in 2019, according to Mastercard SpendingPulse projections.

Other firms have also projected strong retail sales for the holiday shopping season as a whole. The National Retail Federation expects combined November and December retail sales will grow between 8.5% and 10.5% over last year to reach a new record of as much as $859 billion.

“There is considerable momentum heading into the holiday shopping season,” said NRF President and CEO Matthew Shay in a press statement late last month. “Consumers are in a very favorable position going into the last few months of the year as income is rising and household balance sheets have never been stronger. Retailers are making significant investments in their supply chains and spending heavily to ensure they have products on their shelves to meet this time of exceptional consumer demand.”

Executives at some of the major retailers have echoed these sentiments in recent remarks.

“When [supply chain issues] first began in the fourth quarter of 2020, our teams activated plans to mitigate bottlenecks, and since then, stayed agile and flexible, leveraging our strong networks and relationships with international carriers and brands,” Macy’s CEO Jeff Gennette said during the company’s earnings call last week. “Significantly, as a result, we don’t expect to be materially impacted by supply chain issues during the critical holiday shopping season.”

“We’re off to a good start for the holiday season and a good position to continue delivering strong results,” Walmart Chief Financial Officer Brett Biggs told analysts on the company’s earnings call last week. “Despite the various macro and industry challenges, our inventory position is good, stores and fulfillment centers are well-staffed and our price position remains strong.”