Joe Biden used his first State of the Union address to plug his $250 billion Innovation Act, which is still working its way through Congress.

If lawmakers pass the bill, he said, tech giant Intel would pour an extra $80 billion to expand its plans for a new chip plant in Ohio. The company’s current plans are to spend $20 billion. “Up to eight state-of-the-art factories in one place. Ten thousand new jobs,” Biden said. “Some of the most sophisticated manufacturing in the world to make computer chips the size of a fingertip that power the world and everyday lives.”

The Santa Clara, Calif.-based company has emerged as a tangible selling point for the bill, which aims to boost US semiconductor production, scientific research, artificial intelligence development, and space exploration. Since January, Intel CEO Pat Gelsinger has acted as spokesman for the effort, saying the facility would create a more resilient supply chain for the US.

The US government has been subsidizing the chip industry for a while, but with China quickly outpacing the rest of the world in its support for the semiconductor industry and a pandemic worsening a global chip shortage, Biden wants to write bigger checks. But building a few chip factories is not going to make the US independent from foreign manufacturing.

Regardless of government funding, Intel is set to increase overall capital expenditure to $25 billion to $30 billion for the next five years, said Stacy Rasgon, a senior analyst covering semiconductors at Bernstein. 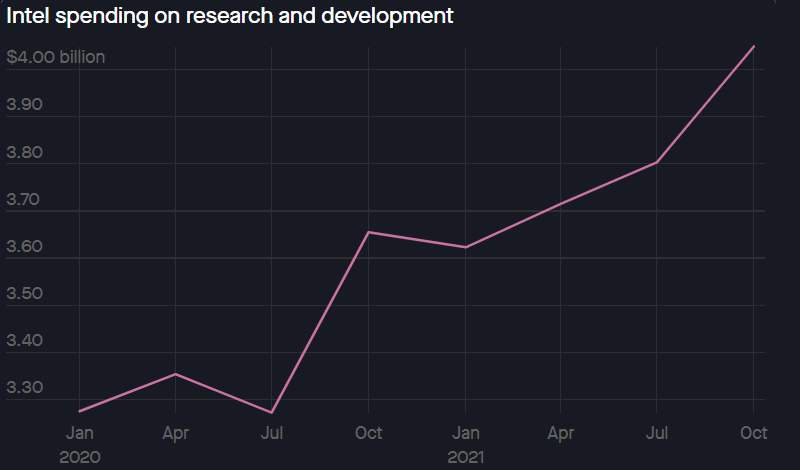 The Innovation Act would give $52 billion over five years to the US semiconductor industry—a drop in the bucket compared to private investment.

While that would be a good start, it would not be enough to protect the US’ edge on semiconductor manufacturing, according to Rasgon and other Bernstein analysts. To make a difference, the government would have to invest in non-US semiconductor companies, and embrace immigration so that companies have the workers to run the semiconductor facilities, they added. That would be a much tougher sell in Congress.