The stock initially jumped in premarket trading  after the company GT, -27.44% reported a fourth-quarter profit that rose well above expectations. It peaked with a gain of as much as 7.5% about 10 minutes before the open bell, then the bottom fell out.

Chief Financial Officer Darren Wells said about 28 minutes into the post-earnings conference call with analysts, which was scheduled to kick off at 9 a.m. Eastern, that the company was “targeting 2022 free cash flow around breakeven.” That compares with 2021 cash flow from operating activities of $1.06 billion.

Wells said the FCF guidance takes into account increases in raw material costs, and inflation in wage, benefit, transportation and energy costs, “at levels beyond what we could offset with efficiency,” according to a FactSet transcript.

The stock plunged 27.4% in very active afternoon trading to a five-month low. That marked the biggest one-day percentage drop since the record 28.6% tumble on Oct. 19, 1987, a day known as “Black Monday,” because of the Dow Jones Industrial Average’s DJIA, -1.43% record 22.6% drop that day.

Trading volume ballooned to more than 56.7 million shares, or nearly 10 times the full-day average over the past 30 days, according to FactSet. 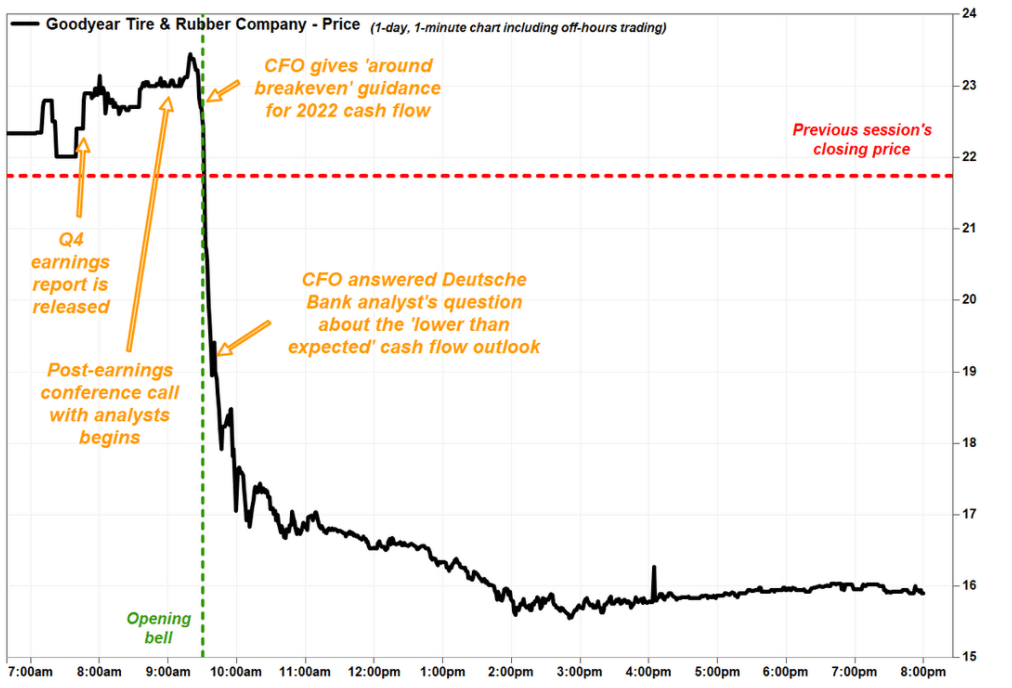 When analyst Emmanuel Rosner at Deutsche Bank asked about the “lower than expected” FCF guidance, the stock was down roughly 11%. CFO Wells answered by saying the outlook started with the fact that the company was able to deliver a stronger than expected balance sheet in 2021, but that didn’t much support for the stock.

When the acquisition of Cooper Tire & Rubber Co. was announced in February 2021, Wells noted that it was expected to take two years before net debt leverage would fall back to pre-deal levels, but the company actually achieved that goal by the end of 2021, a year early.

“And the fact that we had our balance sheet in better shape earlier, I think it made us feel like it is appropriate to be a little bit more aggressive on investment,” Wells said.

He said in particular, the investments are to make sure the factories have the capability to support tires that Goodyear will be designing and making for electric vehicle platforms, “which has been a growing part of our [original equipment] fitment wins”.

The reasoning for the breakeven FCF outlook didn’t seem to matter to investors, as the stock’s selloff continued.

Meanwhile, for the fourth quarter, net income increased to $553 million, or $1.93 a share, from $63 million, or 27 cents a share, in the same period a year ago. Excluding nonrecurring items, such as a $379 million tax benefit, adjusted earnings per share rose to 57 cents from 44 cents, beating the FactSet consensus of 32 cents.

“We achieved our highest fourth quarter revenue in nearly 10 years as demand for our products remained strong and we captured higher selling prices,” said Chief Executive Richard Kramer. “Looking ahead, we expect inflationary pressures to persist over the next several quarters.”