Gold: Should investors hold it in a bear market?

The precious metal often labeled a ‘hedge against inflation’ and commonly known as a ‘safe haven’, is looking dull.

“First, with major central banks around the world tightening their policies, this has helped to send bond yields to multi-year highs. Yield-seeking investors have been better off to hold government bonds to get some guaranteed return rather than holding zero-yielding assets like gold,” Fawad Razaqzada, market analyst at City Index and FOREX.com told.

“Second, the strengthening US dollar has weighed heavily on nearly all major buck-denominated assets, including gold. Would-be buyers earning in foreign currencies are having to pay more, and so they are being discouraged to invest in gold,” he continued. 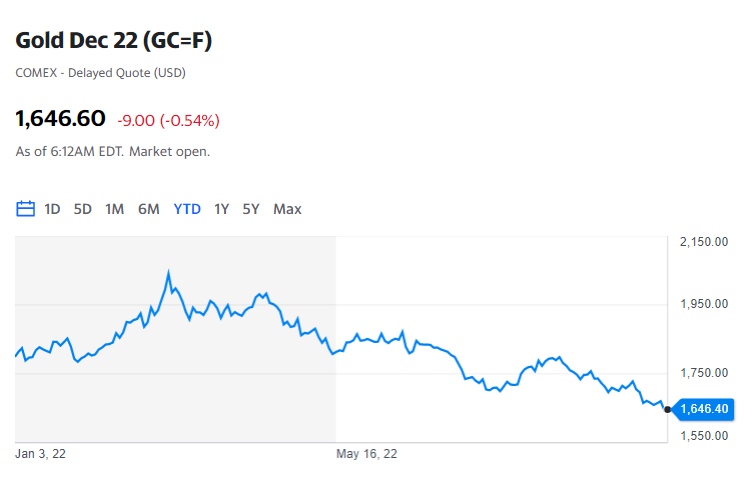 Should investors hold gold in their portfolios, and if so, how much?

This is where fund managers and strategists really differ.

“We do not recommend a fixed allocation to gold unless investors want to speculate on currency rates or have some other short-term bull thesis that could cause gold to appreciate,” Jay Hatfield, portfolio manager of the InfraCap Equity Income Fund (ICAP) ETF told.

“Investors may consider very modest exposures if they are particularly concerned about trend in the value of the U.S. dollar reversing, which could unhinge inflation pressures further and support gold prices,” said Haworth.

Others support a small exposure in a portfolio.

“In general, although each investor’s situation is unique, we believe a 3-5% allocation to gold products would seem adequately sized to capture the benefits of holding gold as an asset class,” says Imaru Casanova, deputy portfolio manager/senior gold analyst at VanEck

Mohit Bajaj of WallachBech Capital tells he’s a “big proponent of always allocating across the board in all sorts of asset classes. Anywhere from 5-10%… should be more than sufficient.”

For investors who want to hold the yellow metal, which is better: Physical gold or paper gold (investments that cover gold ETFs) ?

Some experts bring up safety and storage concerns when it comes to physical gold.

Louis Navellier, founder, and chief investment officer of Navellier & Associates tells he doesn’t recommend physical gold, but he does have a tip for those who insist on holding it: “There is a big markup on coins, so Credit Suisse bars are typically sold with a smaller markup.”

As for ETFs, Navellier says, “I do not recommend gold ETFs, since I do not like to pay the ETF spreads.”

But Bajaj of WallachBech recommends the SPDR Gold Shares (GLD), “if you want to get access to gold without having to physically buy the metal.”

GraniteShares Gold Trust (BAR) “is another one that we’ve seen a lot of strong demand in,” said Bajaj.

“From a price standpoint, it’s only like $16 or $17, so for those who are novice investors who want to put their foot into the space, they can buy that without having to expend as much capital,” he added.