Gold Edges Down and Copper Gains as Investors Brace for Powell

Gold dropped slightly and copper gained before a key speech by Federal Reserve Chair Jerome Powell later Friday that will be eyed for clues on the future path of monetary policy.

Bullion pared a small weekly gain as the dollar rose, having climbed in the past three sessions amid uncertainty over recession risks as the Fed tightens policy to fight inflation. The government’s main measures of US growth pointed in different directions in the first half, adding to debate on whether the central bank will slow down its aggressive rate hikes.

The metal is down more than 4% this year as higher interest rates dull the allure of non-yielding assets. Powell — who is scheduled to deliver the keynote address at the annual Jackson Hole symposium at 10 a.m. Washington time — may restate his resolve to keep on tightening as US price pressures remain elevated.

Ahead of his remarks, St. Louis Fed chief James Bullard said officials should act quickly and lift the policy benchmark to 3.75% to 4%. Separately, Kansas City Fed President Esther George said the Fed hasn’t yet raised borrowing costs to levels that weigh on the economy and may have to take them above 4%.

“We still expect the Fed to take the upper bound of the Fed funds rate to 4% by early 2023,” Georgette Boele, senior gold strategist at ABN Amro Bank NV, said in a note that also flagged expectations for a relatively strong dollar. “However, we only expect a modest decline in gold prices,” she said. The bank’s new year-end forecast stand at $1,700 an ounce, down from $2,000 previously.

Copper rose ahead of Powell’s speech, and is heading for a weekly gain after China’s announcement of a further 1 trillion yuan ($146 billion) in stimulus to be largely targeted at infrastructure. Tighter supply driven by a drought in the country is also adding support. That has already forced several smelters offline as the government rations power.

Base metals are still holding in the tight range established this month as cuts to production in China and Europe are balanced by weakening demand as global business activity contracts. They may gain if Powell’s speech is more dovish than expected, which would ease fears tighter monetary policy will harm the US economy. 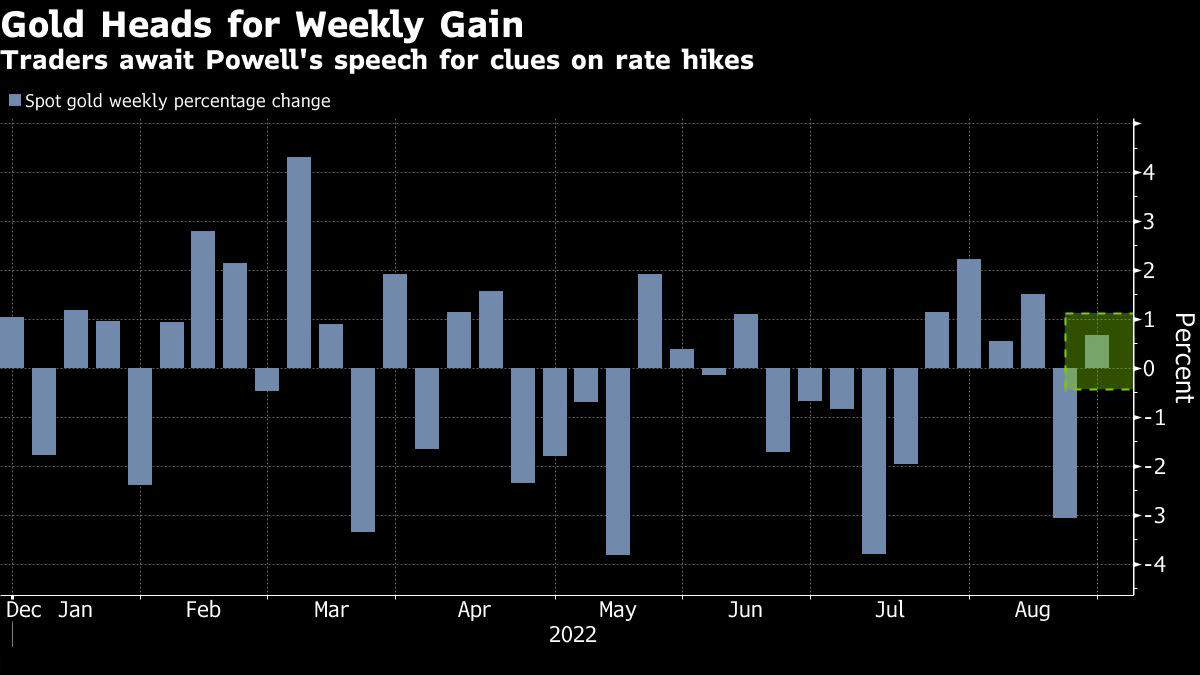