Gas prices at the pump could decline slightly in the coming days, says one analyst. The national average in the U.S. is now at $4.97 per gallon.

“I am forecasting that gasoline prices will drop 5 cents per gallon in the next 7 days … and with any luck another 5 to 10 cents after that. Gasoline futures prices are well off their highs,” Andy Lipow, president of Lipow Oil Associates, a petroleum consulting firm based in Houston, wrote in a note to investors.

The analyst notes demand concerns given the recent rate hikes announced by the Federal Reserve and other central banks abroad.

“Rising interest rates around the world is going to hit the consumer’s pocketbook. I think it will result in additional demand destruction and lower prices,” Lipow said. 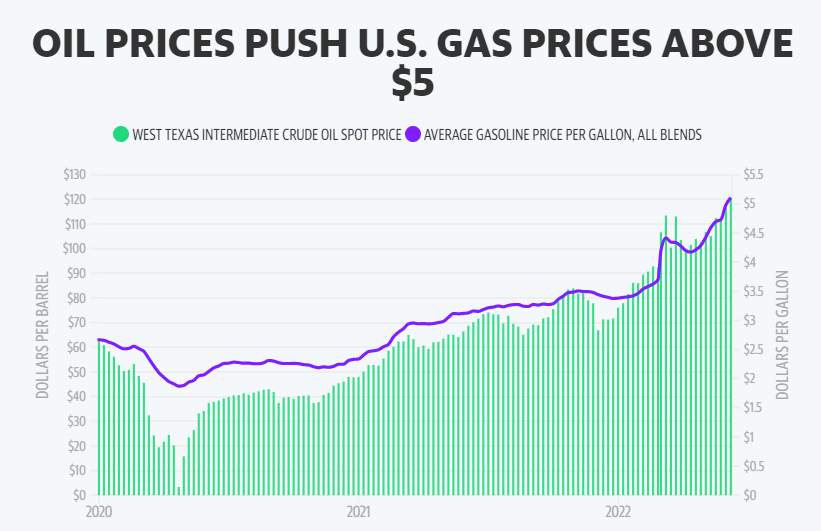 Gasoline demand is starting to show some cracks as consumers modify their habits amid higher fuel and food costs. High energy prices around the world are raising concerns of slowdowns, or worse, a recession.

“Between high energy, food and commodity prices, I would not be surprised to see Latin America, Africa and parts of Southeast Asia slip into recession spreading to China, Europe and ultimately the USA,” said Lipow.

Crude oil costs make up about 60% of retail prices at the pump, according to the U.S. Energy Information Administration (EIA).

Limited refining capacities in the U.S. has also been a major driver for higher gas prices.

“If we’re going to get U.S. gasoline prices to fall, it’s probably not going to be a supply-driven solution. The solution here, unfortunately, is probably a recession that kills demand and reduces scarcity of supply,” Stewart Glickman, energy equity analyst at CFRA Research.