Ford Has Two Surprises That Neither Tesla Nor GM Will Like

The legacy carmaker is accelerating efforts to deliver on its promise to become a top player in the electric vehicle market.

The legacy carmaker is determined to disrupt disruptors. And for the group led by Jim Farley the disruptor is Tesla ( (TSLA) – Get Tesla Inc. Report) and Elon Musk. The Dearborn, Michigan-based company began by separating its gasoline car (ICE) business from its electric vehicle (BEV) business into two separate entities, Ford Blue and Ford e. The two entities remain overseen by Farley.

The second point of the electric revolution is to deliver 600,000 vehicles per year worldwide by the end of 2023 and two million units per year by 2026.

To achieve this, the firm plans to develop electric versions of most of its vehicles. This strategy involves giving priority to its iconic brands and its line of pickups/trucks. It is with this in mind that the Mustang was one of the first brands to have a less polluting version: the Ford Mustang Mach-E which is in competition with the Tesla Model 3 and Tesla Model Y. Ford then threw all its efforts into develop the F-150 Lightning, an electric version of the F-150 pickup/truck, the best-selling vehicle in the United States for 40 years. There is also an E-Transit van.

The Maverick Lightning and The Ranger Lightning

If the Mustang Mach-E and the F-150 Lightning are real successes, the automaker does not intend to rest on its laurels when it is increasing production rates for both models. To meet high demand, Ford is no longer taking reservations and has had to ramp up production capacity at The Rouge Electric Vehicle Center in Dearborn, Michigan, where the F-150 Lightning is manufactured. This facility can build 150,000 trucks per year, according to Ford.

The car manufacturer has just taken a new step which confirms its global ambitions. Ford has filed for new trademarks in North America and Europe, a move that suggests the company plans to offer electric versions across its entire pickup/truck line up.

According to information available on the website of the authority in charge of intellectual property in Europe, Ford wants the names Maverick Lightning and Ranger Lightning to be recognized as registered trademarks.

The authority is still examining the application since in status it is noted: “Application under examination.” All this shows that electric versions of Ford’s compact and midsize pickups/trucks are in the works.

On April 26, the official start date of production of the F-150 Lightning, CEO Jim Farley made a surprise announcement:

“We’re already pushing dirt down in Blue Oval City in Tennessee for another electric pickup truck that’s different than this one,” Farley said. He didn’t give further details, but Ford spokespeople later said the new electric pickup “will be a next-gen electric truck, different from F-150 Lightning.”

What Will Ford’s Next Electric Pickup/Truck be?

The only thing we know is that this new electric pickup will be assembled at BlueOval City’s production facility in Stanton, Tennessee. This $5.6 billion manufacturing complex should start producing the new generation of batteries for F-Series pickups in 2025.

But there is a good chance that this new electric pickup will be a mid-size version since the Lightning is a full-size truck. It could be based on the Ford Ranger or the Ford Maverick.

To separate the two, we examine their platforms.

The Maverick’s platform is new, which suggests that Ford isn’t going to update or change it anytime soon.

The Ranger platform must be completely changed, but it can be adapted to both electric and hybrid vehicles. In addition to this, Ford unveiled, on November 24, the new generation of the Ford Ranger pickup sold in more than 180 countries. 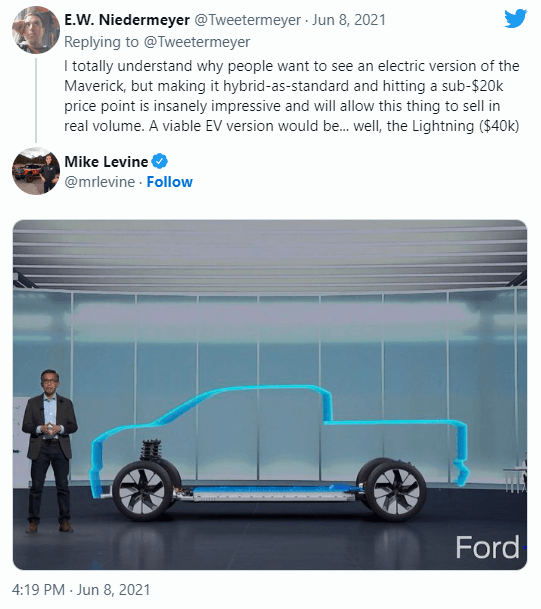