Fisker (FSR) shares are on the move after the company posted an upbeat quarterly financial report.

Though the EV automaker hasn’t posted meaningful revenue or earnings yet, its upcoming first model, the Fisker Ocean SUV, crossed 56,000 reservations as of August 1. Of those, 5,000 are for the Fisker Ocean One special edition, which requires a $5,000 down payment.

Fisker confirmed it is all set to begin production of the Fisker Ocean on November 17 at contract partner Magna Steyr’s (MGA) plant in Europe. Fifty-five prototypes have been built so far at that plant.

“We have built cars the entire year [in Europe] and we have also, I think, managed our supply chain really well; we are still on schedule,” said CEO and founder Henrik Fisker. “I think we might be the only EV company that has not delayed or lowered our production forecast; in fact, we’re trying to increase production next year due to the high demand for our vehicles.”

Fisker himself has posted images of himself tooling around Los Angeles in one of the Fisker Ocean prototypes. 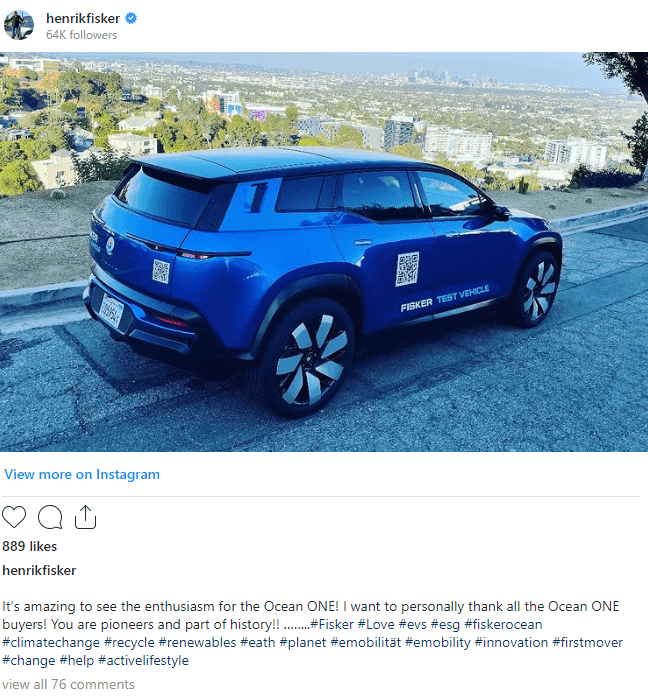 “We still have some fine-tuning to do — it’s not perfect and I want perfection,” Fisker said about the prototype. “But it’s great to drive it around. It definitely gets a lot of looks because people are wondering, ‘What is this?’ It’s pretty exciting.”

The company also noted its other contract partner, Foxconn, had completed its acquisition of a production facility in Ohio, where Foxconn will build Fisker’s second vehicle, the smaller PEAR SUV.

The PEAR is expected to have a starting price below $30,000, and Foxconn intends to build 250,000 PEAR units a year once production has ramped up. The Pear will make its debut sometime in 2024.

“I think there’s a real lack of cool, good-looking, fantastic high-tech EVs that are affordable,” Fisker said. Currently the Chevrolet Bolt EV (GM) and Nissan LEAF EV are the only EVs in the U.S. that can be had for under $30,000 before any tax credits.

“Our strategy is to go into market segments where there’s very few competitors, and that’s why we’re doing this vehicle for under $30,000,” Fisker says about the PEAR. “We think there’s a huge potential in that market and this car will be amazing, revolutionary. It’s a different approach to a vehicle so we are very excited about it.”