A debt ceiling fight is looming in the United States yet again, giving investors another worry for markets this year.

The United States will likely hit its mandated $31.4 trillion borrowing limit on Thursday, forcing the Treasury to launch extraordinary cash management measures that can likely prevent a debt default until early June.

Recurring legislative standoffs over the debt limits this last decade have largely been resolved before they could ripple out into markets. That has not always been the case, however: A protracted standoff in 2011 prompted Standard & Poor’s to downgrade the U.S. credit rating for the first time, sending financial markets reeling.

Some investors now worry the Republican party’s narrow majority in Congress could make it harder to reach a compromise this time.

Here is a Q&A about the implications for markets:

WHAT IS THE DEBT CEILING?

The debt ceiling is the maximum amount the U.S. government can borrow to meet its financial obligations. When the ceiling is reached, the Treasury cannot issue any more bills, bonds or notes. It can only pay bills through tax revenues. The ceiling is currently equal to roughly 120% of the country’s annual economic output.

WHEN WILL THE UNITED STATES HIT THE DEBT CEILING?

U.S. Treasury Secretary Janet Yellen said last week the government could pay its bills only through early June without increasing the limit. That is sooner than some analysts’ forecasts that the government would exhaust its cash and borrowing capacity – the so-called “X Date” – sometime in the third or fourth quarter.

Jonathan Cohn, Head of Rates Trading Strategy at Credit Suisse in New York, estimated the “drop-dead date” between September and early November. Goldman Sachs estimated the debt ceiling would be reached between August and October.

WHAT CAN THE TREASURY DO TO MEET ITS OBLIGATIONS?

It can use cash on hand and extraordinary measures to generate cash once the debt limit is reached. It had a closing balance of $321.5 billion at the Treasury General Account (TGA) as of Jan. 13. Yellen said the Treasury this month anticipates suspending new investments in two government retiree funds and suspending reinvestments in part of a savings plan for federal employees. 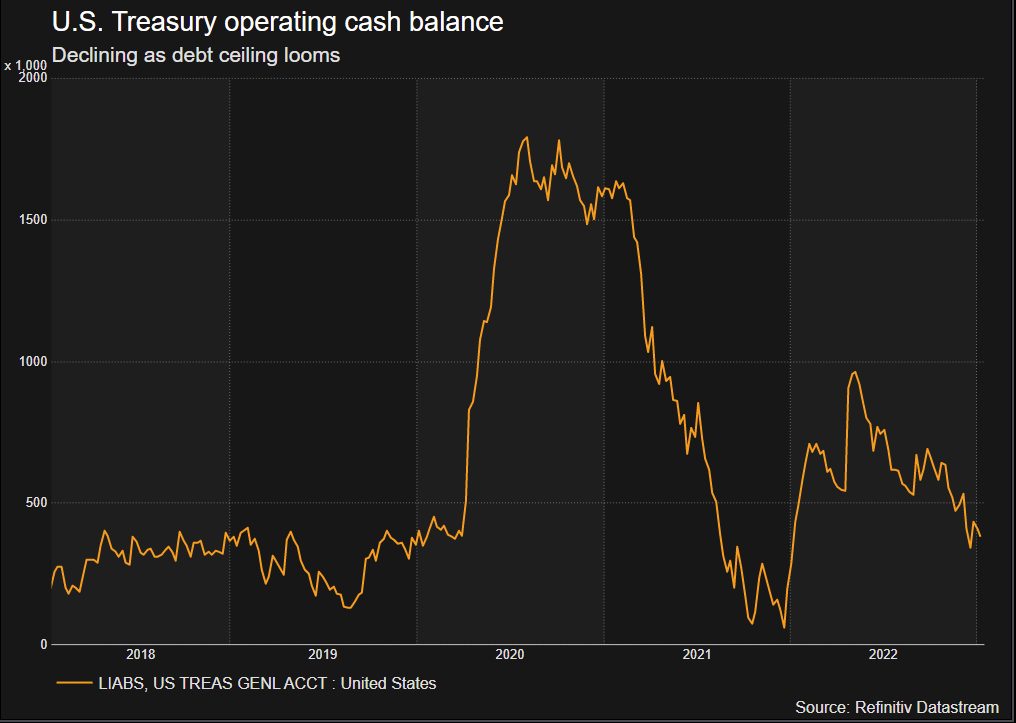 Some Treasury bills maturing in the second half of the year are already featuring a premium in their yields that may be tied to an elevated default risk during that window, according to some analysts. 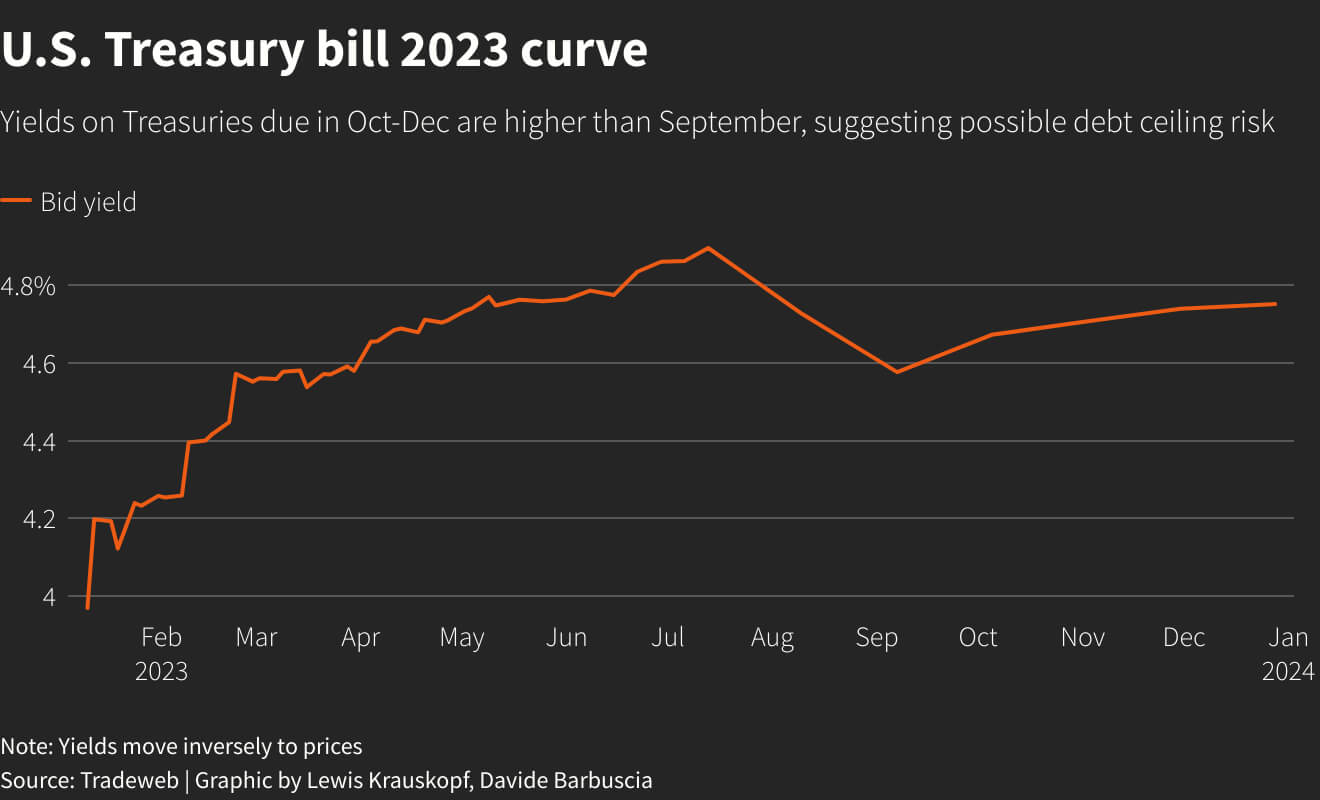 Meanwhile, the cost of insuring U.S. debt against default for five years stood at about 32 basis points on Tuesday, the widest spread since 2013. 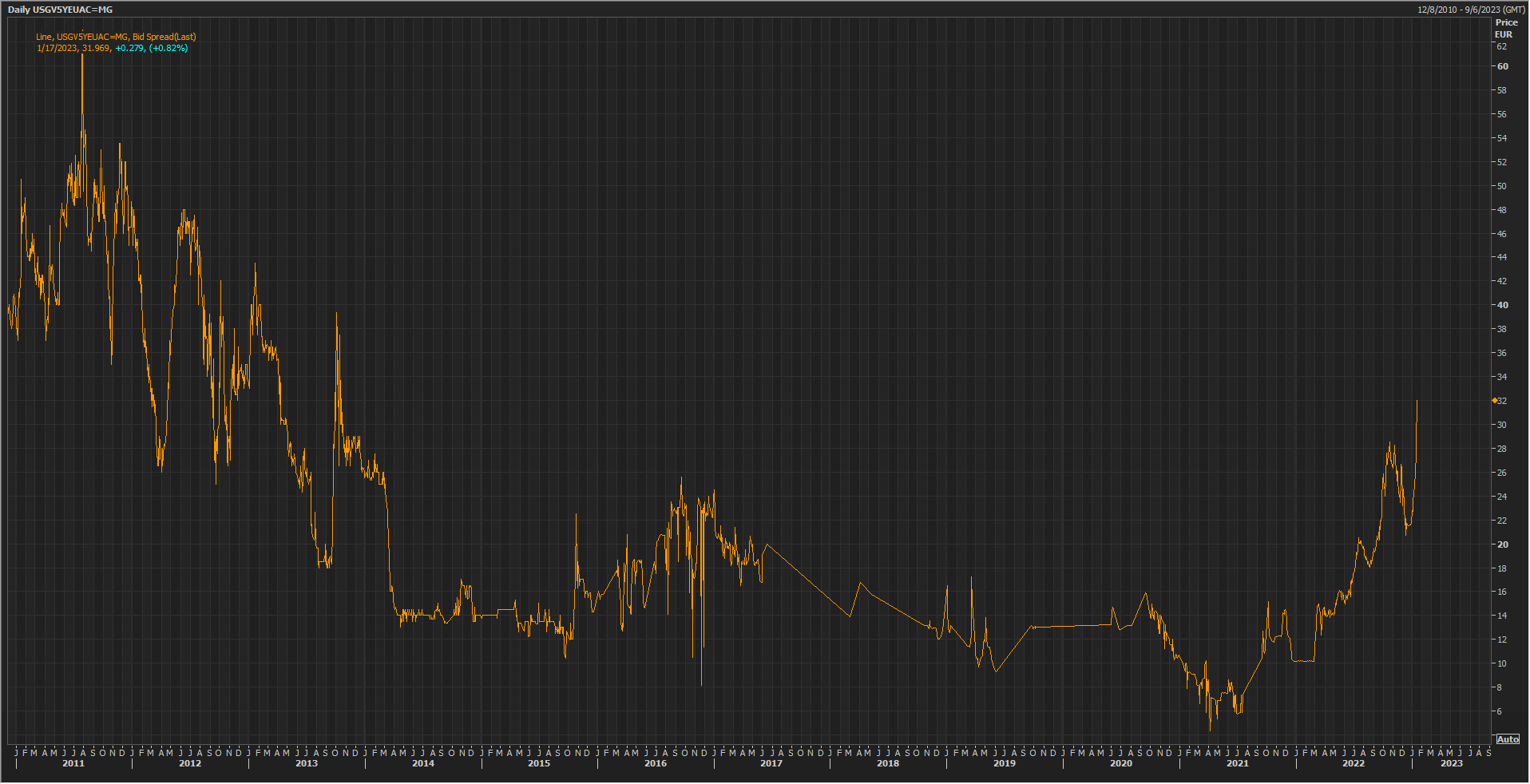 “The Treasury curve is pricing in some kind of distortion in the Q3-Q4 time period, and that’s consistent with the exhaustion of stop-gap measures that the government can use right now to run down cash balances at the Treasury in order to fund the government,” said Eric Theoret, global macro strategist at Manulife Investment Management.

For Andrew Hunter, senior U.S. economist at Capital Economics, yields of Treasury bills and bonds due this summer may rise in the coming months as the risk of a crisis rises.

WHAT HAPPENS IF THE UNITED STATES DEFAULTS?

The rising risk of a default could push some investors to move money into international equities and foreign governments’ bonds.

In 2011, political gridlock in Washington over the debt ceiling sparked a stocks sell-off and took the United States to the brink of default, with the country losing its top-tier AAA credit rating from Standard & Poor’s.

Goldman Sachs in a research note said the S&P 500 fell 15% during the 2011 crisis with stocks with the greatest sales exposure to U.S. federal spending plunging by 25%.

In 2021, some equity weakness and anomalies in the pricing of short term Treasury bills showed rising concerns as Congress faced approaching deadlines to fund the government and address the debt ceiling.

An actual U.S. debt default would likely send shockwaves through global financial markets, as investors would lose confidence in the U.S. ability to pay its bonds, which are seen as among the safest investments and serve as building blocks for the world’s financial system.

That “could leave some lasting scars, including a permanent increase in the cost of funding U.S. federal debt,” said David Kelly, chief global strategist at J.P. Morgan Asset Management.