The company’s revenue in Europe for the second-quarter increased 69%, led by strong growth in the Netherlands and Germany.

Outlook: Enphase Energy estimates that third-quarter will be in the range of $590 million-$630 million, above consensus. The company expects non-GAAP operating expenses to be around $77 million-$81 million. This excludes $60 million for stock-based compensation and acquisition-related costs.

Enphase Energy broke out of a double-bottom base pattern with a 193 buy point in early June, according to MarketSmith analysis. Shares quickly reversed more than 8% below that buy point. That triggered the automatic sell rule. 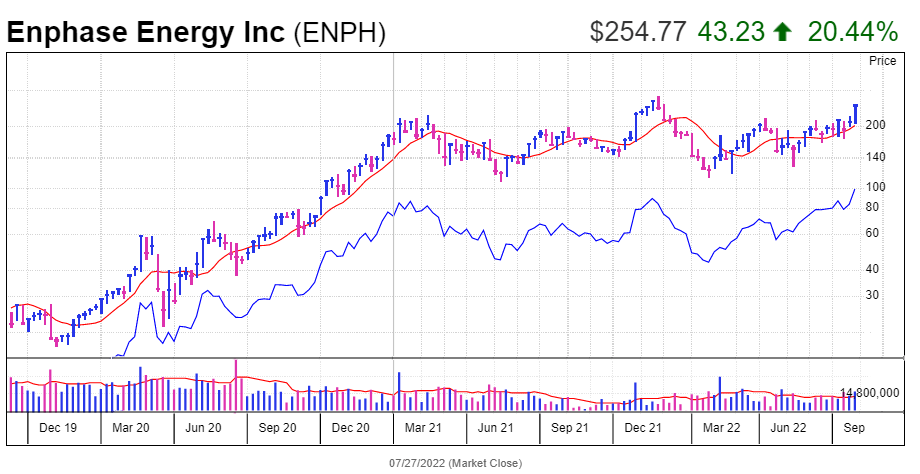 ENPH develops, manufactures and sells solar micro-inverters, energy-generation monitoring software and battery storage products. In addition, the company, which began in 2006, has expressed plans to expand its business segments. At the end of the first quarter, ENPH announced it will start offering electric-vehicle chargers through its solar installers and that it hopes to be manufacturing its own EV chargers by the end of 2022. Enphase Energy stock is on the IBD 50 list of growth stocks to buy and watch.

ENPH has a best-possible Composite Rating of 99. It has a 98 Relative Strength Rating, an exclusive IBD Stock Checkup gauge for share-price movement with a 1 to 99 score. The rating shows how a stock’s performance over the last 52 weeks holds up against all the other stocks in IBD’s database. The stock’s EPS rating is 96.

U.S. solar projects came to a screeching halt in March when the U.S. Commerce Department began an investigation into whether China was routing components through Southeast Asian countries in order to bypass tariffs. The probe could result in retroactive tariffs of up to 250%. It also effectively ended imports from countries that make up around half of all U.S. solar-panel supplies.

Three other executive orders clear a path for increased domestic U.S. production of solar panels and other clean-energy technologies. The White House is attempting to increase domestic production capacity to 22.5 gigawatts by 2024.

Biden also has said he wants to reduce U.S. greenhouse gas emissions 50% below 2005 levels by 2030. On July 15, solar stocks, including Enphase Energy, booked heavy losses after W.Va. Sen. Joe Manchin told Senate leadership that he would not support an economic package that included new federal spending on clean energy. Without Manchin’s support for clean-energy initiatives, it is unlikely Congress will have the votes to pass policy addressing climate change.

The sticking point seems to be $300 billion in clean-energy tax credits. The tax credit structure and how clean-energy companies could use the credits had been in flux, according to reports.

Discussions have included a possible tax credit for zero-emission power sources until emissions are reduced by 75% from 2021 levels. Refundable tax credits for consumers who purchase electric vehicles have also been on the table, along with tax credits for charging infrastructure and new investment tax credits for transmission and stand-alone energy storage.

Biden announced during a speech last week that executive orders “in the coming days” that would bolster clean-energy initiatives if Congress did not act.

However, on Wednesday evening, Manchin reached an agreement with Senate Majority Leader Chuck Schumer on a proposal that would raise $739 billion in revenue, with the majority of that coming from a 15% corporate minimum tax.

The legislation would also invest around $300 billion into deficit reduction measures, $369 billion into “energy security and climate change” and an additional $64 billion to extend health care subsidies for some Affordable Care Act participants.

Quanta Services (PWR) had a gain of 0.5% Wednesday, trading at 133.97. Quanta specializes in infrastructure projects for the energy and communications sectors. 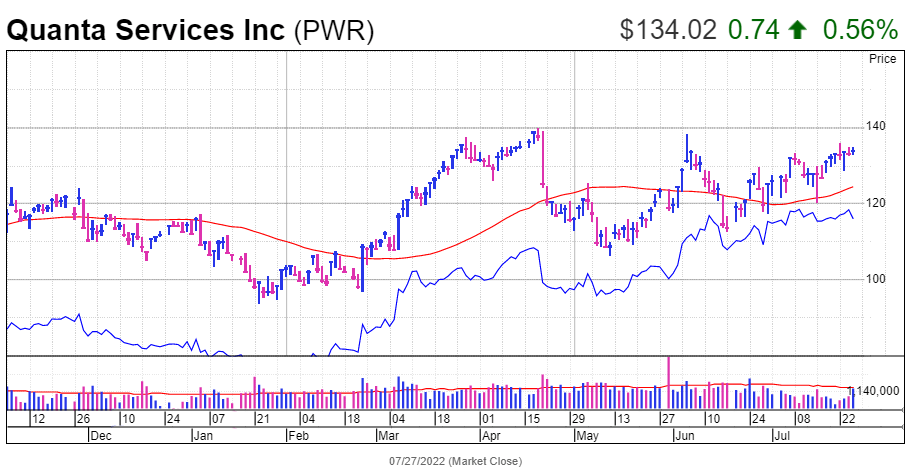 The subcontractor giant recently announced a Renewable Energy segment, which includes services for solar and wind projects. Its other segments include Electric Power (59% of revenue) and Underground Utility and Infrastructure Solutions (27%).

PWR is above its 50-day moving average as it forms an imperfect cup-with-handle pattern with a 138.56 buy point. The buy range extends to 145.49. The handle may morph into a base of its own, offering investors a lower entry point, according to IBD Leaderboard analysis.

Among fuel cell companies, FuelCell Energy (FCEL) gained 4.6% Wednesday before jumping around 9% after the market closed. Meanwhile Plug Power (PLUG) increased 4.8% Wednesday. The stock was trading up 11% after the close.