Elon Musk Wants to Bring Down a Chinese Giant

The Tesla CEO has identified Twitter’s main rival. And this one isn’t in Silicon Valley.

The billionaire and new owner of Twitter (TWTR) wants to move fast to make his mark on the platform he considers the town square of our time.

After dismissing Chief Executive Parag Agrawal and three other top executives, Musk wants to find an economic model to change the narrative around the social network.

Musk, who paid $44 billion to buy Twitter, is determined to shake up the social-media order.

To begin with, he identified Twitter’s main rival. And it’s not the obvious one.

For the tech tycoon, the real competitor to his social network is not from Silicon Valley. It would be Chinese and it’s TikTok. The short-video platform, owned by the Chinese giant Bytedance, is the social network most in fashion these days.

TikTok is popular with Generation Z and millennials, and advertisers jostle for space there. And traditional giants Meta Platforms (META) , parent of Facebook, Instagram and WhatsApp, and Alphabet (GOOGL) , parent of Google and YouTube, have taken note of its rise. They are now copying TikTok by launching Reels at Meta and Shorts at Alphabet.

Musk decided to attack and knock TikTok off its pedestal. To do this, he is about to unsheath a weapon that was buried six years ago and that he will undoubtedly model in his own way.

This is Vine, a mobile app that enabled you to record and share short videos.

As often occurs with Musk, when he has an idea in mind on a crucial issue, he organizes a poll on Twitter, asking users and his millions of fans to weigh in.

“Bring back Vine?” the serial entrepreneur tweeted on Oct. 30.

Participants can answer only “yes” or “no.” The survey closes Oct. 31. About 127,000 people had already responded at last check.

“If you did that and actually competed with tik tok that’d be hilarious,” commented YouTube star Jimmy Donaldson, known as MrBeast.

“What could we do to make it better than TikTok?” Musk responded. 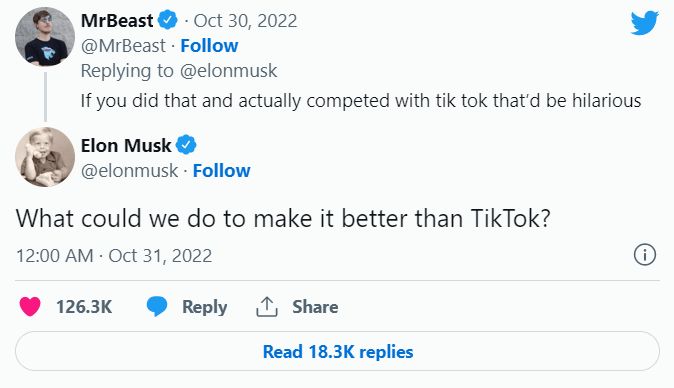 “No one is original anymore, whatever you do will be on every other platform the next month unless it has a deep moat. YouTube has shorts, insta has reels, Reddit, Snapchat, Facebook, etc. all copied TT. Whatever u do make it hard to copy or it’s a waste of time imo,” Donaldson said.

Musk didn’t comment. But his previous post suggests that he has already made up his mind about Vine and doesn’t want to copy TikTok. He wants to dominate the sector by outclassing the Chinese firm.

Vine was created in June 2012. Even before its official launch, the startup attracted the attention of Jack Dorsey, the co-founder of Twitter. The platform acquired Vine at the end of 2012 for $30 million.

Launched in January 2013, Vine has become the most downloaded free application in the U.S.. Seven months later, it claimed more than 40 million users. Its attraction is its format – six-second videos that run on a loop – and its ease of use. No need for editing; the recording is interrupted when the creator hits the button. It resumes by pressing again. Very quickly, the concept demonstrated its full creative potential.

But things changed in June 2013 with the arrival of a similar feature on Instagram. Vine was also facing competition from Snapchat. In search of an ever larger audience, many creators have migrated to YouTube and Facebook.

In summer 2014, the number of users began to decline. Stuck in internal governance issues, the platform evolved only gradually and marginally – the six-second limit, for example, was lifted only in June 2016.

In April 2015, Twitter tried to react by buying Niche, a company that connects creators with advertisers. It promised to open up to advertising and share its recipes. But it was too little, too late. The application had become a financial burden for Twitter, between IT infrastructure and salaries.

“To all the creators out there — thank you for taking a chance on this app back in the day,” the company wrote in its goodbye blog post.

“To the many team members over the years who made this what it was — thank you for your contributions. And of course, thank you to all of those who came to watch and laugh every day.”