Elon Musk Says He Is Buying the Crypto Dip

The billionaire and CEO of Tesla is an evangelist of digital currencies like Dogecoin and Bitcoin.

Undoubtedly, this is the wake-up call the cryptocurrency market needed.

Elon Musk, the CEO of Tesla (TSLA) – Get Tesla Inc. Report, and one of the biggest influencers in the world gave his support on June 19 to the crypto industry and more particularly to the meme coin Dogecoin.

“I will keep supporting Dogecoin,” Musk tweeted to his nearly 99 million followers on June 19.

Then followed an exchange with a user who told Musk that he should therefore continue to buy Dogecoin if he really supported the token.

To which Musk responded: “I am,” suggesting that he’s buying the dip.

Musk’s tweet caused a real rebound in the market, which saw the post of the richest man in the world as a sign of renewed confidence in cryptocurrencies while there are many questions about the future of many projects and firms. 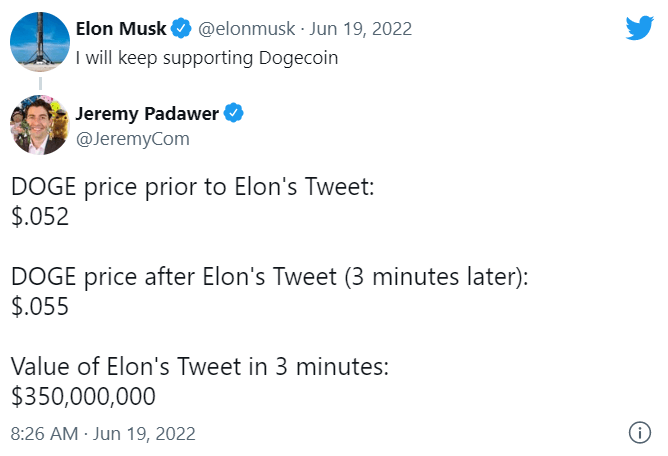 Ether, the second cryptocurrency by market value, was at $1,051.09 at last check, up 9% in last 24 hours. The native token of the Ethereum platform had fallen as low as $881 the previous day, its lowest since January 2021.

Ether and Bitcoin together represent just over 55% of the value of the crypto market, which often changes according to their price. The crypto market as a whole gained 3.7% to $972 billion in the past hour.

Musk’s support for Dogecoin and indirectly for other cryptocurrencies was met with mixed reception on social media. Some accused the world’s richest man of price manipulation, while others called him a public supporter of Bitcoin.

“Aren’t you getting sued for manipulating Crypto?” one Twitter user commented.

“A curiosity: why Doge and not any other coin? Are there any technical reasons or what?” asked another.

“Elon Musk support is the only thing keeping Dogecoin going,” said another user. “Musk last year withdrew his support for Bitcoin citing environmental concerns, if he stops supporting Dogecoin it might collapse. Doge has refused to build any utility. Everything is dependent on Musk. Doge needs utility.” 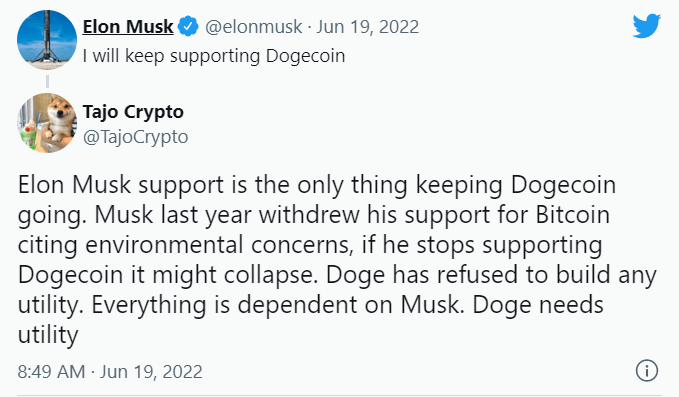 Dogecoin was created by Palmer Jackson and Billy Markus. The two had said that they’d decided to create a payment system as a joke. The coin was supposed to make fun of the wild speculation in cryptocurrencies. But it has become one of the world’s most valuable crypto, with a market value of $7.78 billion at last check.

Tesla and SpaceX, two of Musk’s companies accept Dogecoin as payment for their merch. Tesla also invested $1.5 billion in Bitcoin in February 2021. That investment is now worth just $792.21 million, according to Bitcoin Treasuries.

The reasons for the crash are the same: fears of recession are pushing investors to liquidate risky assets. Cryptocurrencies and tech groups are considered as such.

The crypto market is also shaken by various scandals.

The first is the sudden collapse of sister tokens UST and Luna, despite their founders promising that their technology was solid and viable.

The second scandal is the decision on June 12 by crypto lender Celsius Network to freeze withdrawals and other transactions from its platform. Rumors have since been circulating about a potential insolvency from Celsius, which has still not dispelled them.

Then, on June 17, crypto financial services company Babel Finance said it was temporarily suspending withdrawals and redemptions in the latest blow to the cryptocurrency sector.

Three Arrows Capital (3AC) confirmed the rumors that it was having very serious financial difficulties after its investments in projects like Luna turned into disaster.

“We are committed to working things out and finding an equitable solution for all our constituents,” the crypto hedge fund co-founder Kyle Davies told.