Tesla (TSLA) and Chief Executive Elon Musk are in a race against time to keep their promises.

The entrepreneur has promised that by year’s end Tesla vehicles will be able to drive themselves completely, even when the regulations are far from ready.

The technology, according to some experts, is also not up to date.

He emphasized: “Being safer than a human is a low standard, not a high standard. People are often distracted, tired, texting. … It’s remarkable that we don’t have more accidents.” In other words, owners and future owners of Tesla cars will have a feature enabling their cars to drive themselves in any conditions by the end of the year.

To emphasize that he’ll be able to keep this promise, the billionaire and Tesla have just rolled out a new update of full-self-driving software, the company’s most advanced driver assistance system.

“You will get access to a suite of more advanced driver-assistance features, designed to provide more active guidance and automatic driving under your active supervision,” the carmaker says on the website dedicated to FSD.

“FSD Beta 10.69 started rolling out to Tesla owners last night,” Musk posted on Twitter on Aug. 21. “This build is a big step forward! 10.69.1 probably end of week with wider release. 1069.2 in a few weeks should be good enough to provide to all FSD Beta participants.”

The tech mogul took advantage of this software update to increase the price of FSD, which now will cost $15,000 in North America, up 25% from $12,000 previously.

This price increase is effective Sept. 5. It won’t affect any orders made before that date, Musk said.

The FSD price hike comes as Tesla, like other automakers, has lifted the prices of its cars to pass on soaring costs to consumers.

This decision also suggests that the billionaire has confidence that Tesla customers will believe that the new price appropriately reflects the technological innovations in the latest build.

To be sure, FSD does not make Tesla cars self-driving: “All Tesla cars require active driver supervision and are not autonomous,” the automaker warns on its website. Moreover Tesla has taken many precautions as it deploys this new update of the system. 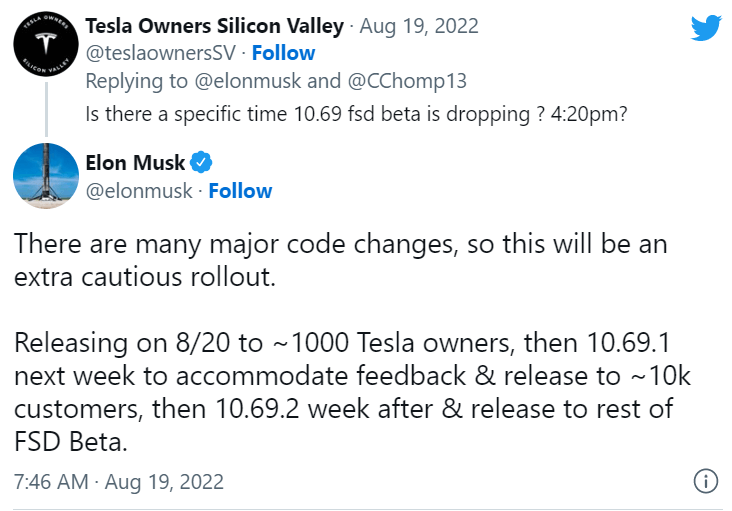 The vehicle manufacturer recently said that more than 100,000 Tesla owners have subscribed to FSD Beta.

FSD Beta members are required to provide feedback to Tesla when they encounter a problem. This is intended to allow Tesla to make the necessary adjustments and improve the technology.

“We’re still tracking very much to have widespread deployment of FSD Beta this year in North America. So I should say, basically FSD will be available to anyone who requests it by the end of this year,” Musk said during the annual meeting on Aug. 4.

The price increase comes as Autopilot, the generic name of Tesla’s driver-assistance systems, is the subject of a cascade of investigations by regulators.

The National Highway Traffic Safety Administration is investigating almost 40 crashes involving automated driving systems since 2016. Of those, more than 30 involved Teslas, including 11 fatal crashes that have killed a total of 15 people.

Last month, the agency began probing a fatal pedestrian crash in California involving a Tesla Model 3 and launched an investigation into an accident that killed two occupants of a 2015 Tesla Model S along Interstate 75 in Florida, a person familiar with the matter told TheStreet on July 11.

In June, the federal agency released data from automakers and tech companies showing nearly 400 crashes over a 10-month period involving vehicles with partly automated driver-assist systems, including 273 with Teslas.