Down 62% Year to Date, Is Rivian Stock Worth the Risk Today?

The electric vehicle boom is happening before our eyes, but investors still need to be cautious about what EV stocks to buy.

Once dubbed the next Tesla by some investors, Rivian Automotive (RIVN -4.17%) has taken a turn for the worse recently. Shares of the pure-play electric vehicle (EV) company have nosedived 62% since the start of 2022, owing to a string of company-specific issues and macroeconomic factors.

Rivian’s stock market journey has been far from ideal since the company went public late last year, but has the negative sentiment surrounding the stock reached bottom? Will Rivian overcome current obstacles and prevail as a winner in the fast-growing EV space? If that’s the case, then investors who buy in at today’s lows could be massively rewarded down the line.

Let’s try and answer those questions now so investors can decide for themselves if the EV stock is worth their time and money.

Rivian has been on a roller-coaster ride

Rivian, which sells electric “adventure” vehicles like trucks and SUVs, delivered its second-quarter earnings report after market hours on Aug. 11, sending mixed signals to investors. The company generated $364 million in revenue, topping Wall Street’s $337.5 million forecast, but it also warned investors that it will likely endure a wider operating loss in fiscal 2022 than expected.

For the full year, management is now projecting an adjusted earnings before interest, taxes, depreciation, and amortization (EBITDA) loss of $5.45 billion versus its original $4.75 billion estimate. In Q2 alone, the EV company experienced a net loss of $1.7 billion, equal to a loss of $1.89 per share, as it continues to ramp up spending in an effort to expand its operations. 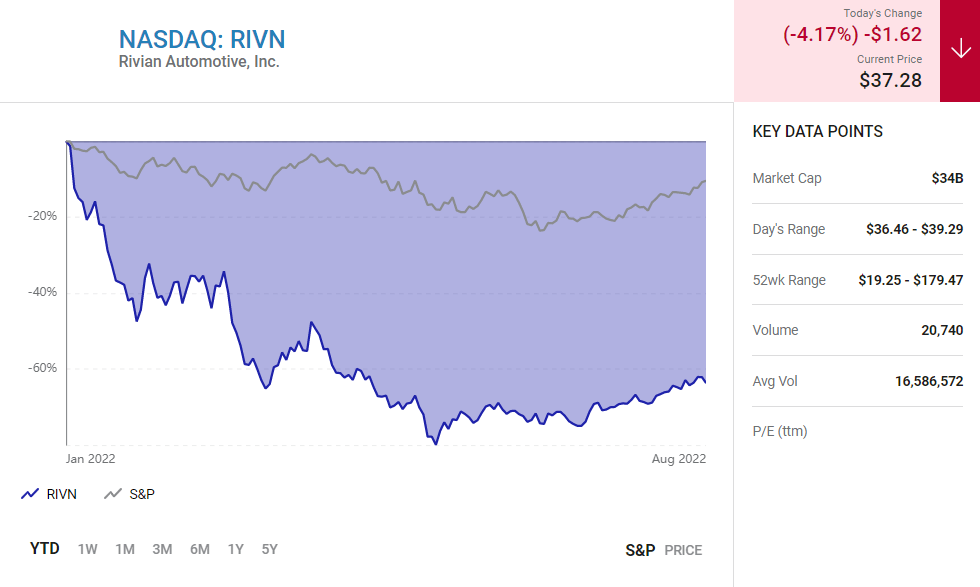 Despite persistent supply chain bottlenecks, management reiterated its previous production guidance for 25,000 vehicles in 2022. In its second quarter, Rivian produced 4,401 vehicles, translating to 72% growth year over year, and it also rolled out its EDV 700 electric delivery vans with Amazon (AMZN -0.26%) in more than a dozen cities across the country. As part of its partnership with the e-commerce giant, Rivian intends to bring thousands of EV delivery trucks to 100 cities by the year’s end, and if that doesn’t impress you enough, it plans to provide 100,000 vans across the U.S. by 2030.

As of June 30, the company claims that it has a pre-order backlog of 98,000 units. If that’s true, then demand surely isn’t a problem for the EV business, but investors should still monitor Rivian’s progress toward profitability. The company is well-funded with $15.5 billion in cash, cash equivalents, and restricted cash, but it also hasn’t been shy about spending its money, burning $1.6 billion in cash in Q2 alone. So while management is confident that it has sufficient liquidity for now, there’s no guarantee that Rivian won’t run out of capital before realizing a positive bottom line.

With a market capitalization of $35.1 billion — a fraction of Tesla’s — Rivian is a stock with plenty of room potentially to grow. Nonetheless, it looks like a dicey play still. The company faces fierce competition from not only Tesla but also a string of traditional automakers who are starting to make a lot of noise in the space.

It’ll be interesting to watch this one play out, but investors should be aware that investing in Rivian comes with a great deal of risk for the time being.